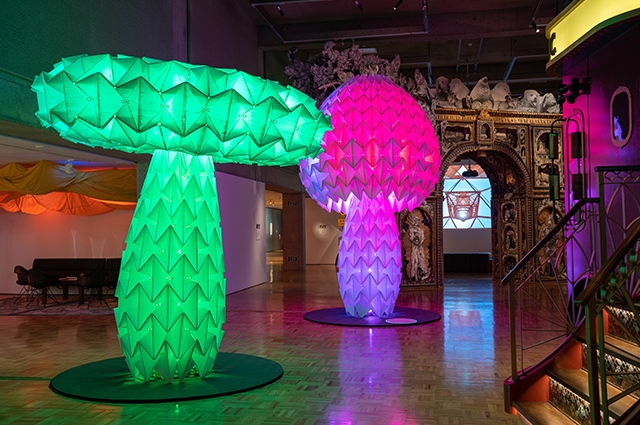 As an Oaklander, I have always been proud of my roots grounded in the heart of the Bay Area. When I heard that the Oakland Museum of California was hosting a Burning Man exhibit, I hopped into my beaten-down car without hesitation and drove straight to my hometown to experience this extraordinary opportunity.

Walking down the halls of the museum I grew up attending, I felt a new sense of love for my city — Oakland continues to enhance its rich culture and community bond. There were people from all walks of life gathered to view the exhibit, and I noticed how art connects people.

“Why Oakland? A lot of reasons… The story originated here in the Bay Area, Burning Man was born on Baker Beach over thirty years ago and a lot of the artists are actually from the Bay Area surrounding the Oakland Community as well,” said Lindsay Wright, Associate Director of Communications at the Oakland Museum.

The exhibit is currently on display in only two places nationwide: Oakland and Cincinnati. The “No Spectators: The Art of Burning Man” exhibit is currently on display at the Oakland Museum of California in the Great Hall from Oct. 12, 2019 to Feb. 16, 2020. Curators from the Oakland Museum went to the Smithsonian Renwick Gallery in Washington, D.C. and decided to reunite the art to its motherland.

“We’ve always wanted to do something on Burning Man just because there’s such a deep history in California and the Bay Area specifically, so it seemed like a great opportunity to utilize what the Smithsonian had already put together and put our own spin on it a little bit with an Oakland focus,” Wright said.

As I opened the doors to the Burning Man exhibit, I felt as though I were crossing a threshold into a new and outlandish world. The sounds of gong-like chimes set an eerie tone to the unusual journey I was about to embark on. The contrast of fluorescent and negative lights made it feel like I was a character in Tim Burton’s renowned movie, “Coraline.”

The exhibit is an orb of unorthodox and uniquely designed art and novel lenses on life. Ranging from fashion to transportation devices, plaques around the exhibit analyze and explain every aspect of the art’s deeper meaning to the core and history of Burning Man.

The first thing you see in the exhibit are the “Ten Principles of Burning Man.” Co-founder Larry Harvey wrote these in 2004 as reflective guidelines of the communal code of behavior and culture of Burning Man. The principles are: Radical inclusion, decommodification, radical self-expression, civic responsibility, participation, gifting, radical self-reliance, communal effort, leaving no trace and immediacy.

Throughout the exhibit, remarkable art pieces pulled me into a sort of hypnotic trance. One piece seemed to attract the largest crowd. Two large fluorescent paper mushrooms stood in the middle of the exhibit, changing color from the cool of blue and green to the warm of pink and orange. As an interactive piece, spectators had the power to change the shape of the mushroom-like sculpture by stepping on a circular slab at its base. Created in 2016, FoldHaus Art Collective assembled “Shrumen Lumen” out of LED lights that would react based on human interaction and simply from daylight itself.

Another exhibit that caught my eye was a massive metal transportation device resembling a dragon made out of old kitchen appliances. Duane Flatmo created “Tin Pan Dragon” in 2008 in hopes of creating a mutant vehicle that could withstand the harsh environment of the desert. At Burning Man, these mutant vehicles act as a source of shelter from the intense winds and dust of Black Rock Desert.

Transportation is not the only form of protection against the fluctuating nature of the desert. Fashion is a large part of the event as a functional strategy to stay cool in the 100-degree heat as well as below-freezing temperatures.

At Burning Man, there is freedom to break away from cultural norms and limitations. At the exhibit, many forms of fashion are displayed. Intricate costume-like dresses with minimal fabric, ornate masks to protect from dust and an overall unorthodox pageant. Through fashion, self-expression is applauded and at Burning Man, the audience is the entertainment.

As explained in the plaque’s narration, the historical origins of Burning Man are what guide the art and the event’s core values. Thus, the history of the event is significant in truly understanding Burning Man itself.

Every story has a beginning; Burning Man’s happens to be a stone’s throw from Davis — San Francisco. In 1986, Larry Harvey and Jerry James built and burned the first man on Baker Beach as a creative way to salute the summer solstice.

“The figure represents nothing expressed or explicable, yet it s a physical and ethical guidepost … during at least one week of the year,” Harvey said, as displayed on a plaque at the exhibit.

The magnetic nature of physically burning the man propelled annual Zone Trips, or a burning of the man on Baker Beach. Word spread and gained popularity.

In 1990, however, the San Francisco police department terminated the yearly ritual on Baker Beach due to public safety risks. That did not dissuade these nonconformists. Instead, they moved the party to Nevada on a three-day excursion, which they then called “Zone Trip #4: Bad Day at Black Rock.”

Kindled with an anti-establishment, hippie-centered culture, the core values of Burning Man evolved. The iconic “maker community” of the event originated from the Arts and Crafts Movement, a reactionary push against the capitalist nature of the Industrial Revolution. The act of making became an outlet for self-expression and for survival in the harsh fluctuating conditions of the desert.

The brutal and relentless nature of the desert may not seem ideal to set up camp but to the founders of Burning Man, it was perfect.

“On the other side of this line, everything will be different” co-founder, Michael Mikel said after drawing a line in the sand of Black Rock desert after first arriving.

Burning Man, a one-of-a-kind experience in a desolate desert, was born. In fact, Harvey, referred to Black Rock Desert as tabula rasa — a blank slate of nothingness of the arid environment, but an opportunity to be filled with imagination and creativity.

A crucial responsibility for the Burning Man participants is to deconstruct the community they built back to the unoccupied desert until the next year. The act of letting go serves as an expression of resistance to materialism, a simplistic lifestyle that Burning Man promotes.

“A city in the desert, a culture of possibility, a network of doers and dreamers,” read a description of the event itself from its organizers displayed at the Oakland Museum.

The exhibit is titled “No Spectators” because there are no spectators at Burning Man. It is a participatory event in which the community comes together to create and gift these creations. Participants get a chance to experience an imperfect world and then actively build a society in which they want to exist.

Gifting is an essential aspect of Burning Man. Nothing is for sale, everything from food to jewelry are gifted. Any sort of “Matter Out Of Place” (MOOP), or having a potential to be trashed, is highly advised against. Everything has a purpose, everything can be reused.

Burning Man is a spiritual event. There are many core values and principles that produce and maintain a harmonious community. On display outside of the exhibit at the Oakland Museum, “The Temple” is hard to miss. People gather awe-struck by its grandiose and intricate beauty. This is a spiritual atmosphere for healing.

“This Temple, created specifically for OMCA, is dedicated to people who mourn the loss of family from violence, deportation, immigration, incarcertaion, suicide, or alientation. It celebrates the people who create families of choice or build new families through foster care and adoption,” states the Temple’s plaque at the exhibit.

The piece is a large ornate wooden structure,\ that has become a place of peaceful reflection, prayer and grieving amidst the chaos of Burning Man. The Temple is burned at the end of the event. However, rather than a celebratory ritual like the burning of The Man, it is characterized as more of a cathartic ritual.

The Temple is where I ended my journey at the Burning Man exhibit. I felt as though I had come full circle; I had soaked up as much of the experience as I could without actually being at the event.

Before attending the exhibit, I had an embarrassingly minimal knowledge on Burning Man. Now, the spiritual and unorthodox nature of Burning Man intrigues me and makes me question my current way of living. It made me see the beauty of every-day life, and also the aspects I wish I could change. The exhibit at the Oakland Museum was an extraordinary experience. Anyone who chooses to take the time to view it will not regret it.