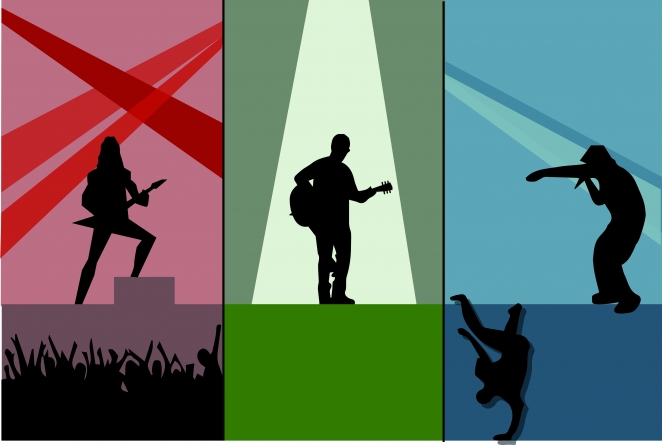 Seeing an artist in concert is, for many, the ultimate way to honor their music and truly experience what they’ve created. The opportunity to hear a singer’s live vocals and the way they choose to convey it in person can be very special for fans, and it can add a new layer of appreciation for the artist. The production of a show is an integral part of that experience; however, the way it is executed varies a lot across genres of music. There are a wide range of musical performances one can seek out and, consequently, there is a different experience that comes along with the type of show that is put on.

I recently attended an Andrew Bird and a Hozier concert in Davis and Berkeley, respectively. These artists can fall loosely into the indie rock and folk categories, although they both explore several other genres. The vibes of their music, however, are similar.

In both Bird’s and Hozier’s performances, there was a fairly simple setup: the main act, the instrumentalists and backup singers in an arc behind them and a screen where images or light designs were displayed. What stuck out to me most was how central the instruments and vocals were to the show. While this seems like an obvious concept, it was strikingly intimate to me, seeing the face of each person who played an essential part in creating the music. Both artists introduced each performer on the stage and expressed great appreciation for all of them and their talents. Bird even had one of the backup singers perform one of her own songs. There was a woman playing the violin at each show as well.

Despite the similarities between the two, they each had their own flare. Hozier’s backdrop displayed footage of protests during his protest song, “Nina Cried Power,” or black and white cartoons, while lights and colors shone across the audience for other songs. Andrew Bird stuck to geometric shapes on a screen which changed colors or patterns for every song. The visual stimulation was helpful in creating a mood for the songs being performed. People were entranced by the music and gave appropriate praise, but the energy of the concert was calm.

That is not to say that this style of performance is better for its raw and simple nature. Artists like Beyoncé put on shows that are much more of a spectacle than a man and his band, which is an entirely different experience. Images on a screen behind the singer is a small fragment of what there is to take in at a big pop or rhythm and blues concert.

At a Rihanna concert I attended a few years back, she sang atop several different platforms throughout the show, including a suspended glass, bridge-like structure. Justin Bieber has descended onto the stage in a cage and also performed with a group of backup dancers on a swaying stage in the air; Taylor Swift has given each audience member a light that would flash or turn on for different songs, drawing the audience into the show and Travis Scott, during his Astroworld tour, rode a real-life rollercoaster constructed in the stadium.

At these shows, the singers naturally sing the majority of the show, but dancing and captivating light effects impact the experience significantly. While the music is an essential component, there is so much more to take in other than the songs. You are watching a production, a visual arts installment, in tandem with the music. The instrumentalists are highlighted for certain songs, but they are mainly in the background. This makes sense for this type of music; a lot of it is synthesized, or not written by the artist, so it’s really just the singer who people care about. With more stimulation than a couple of instruments and a vocalist, the crowd has a vibrant energy. There are lots of screaming and dancing; people are ecstatic to be there.

Granted, the mentioned artists are all much bigger than Hozier or Andrew Bird. The size of the venue (and the budget) permits for a more elaborate show. That said, smaller artists who sing pop and hip-hop maintain a similar vibe at a show, in my experience. I’ve seen contemporary R&B singer Kehlani live a few times who, similar to Beyoncé or Rihanna, has more to offer as a performer than just vocals: she is a trained dancer as well. That, coupled with more upbeat music, creates a pulse in the audience that is also found at a big pop or R&B concert, despite there not being any hanging platforms on which to sing and dance.

Each concert is a curated experience by artists for their audience. The personality of an artist and the genre of their music are fundamental components of their show, which makes concerts unique to each performer. With the different energy of live performances in mind, one is able to pick and choose the type of live show they want to be a part of.