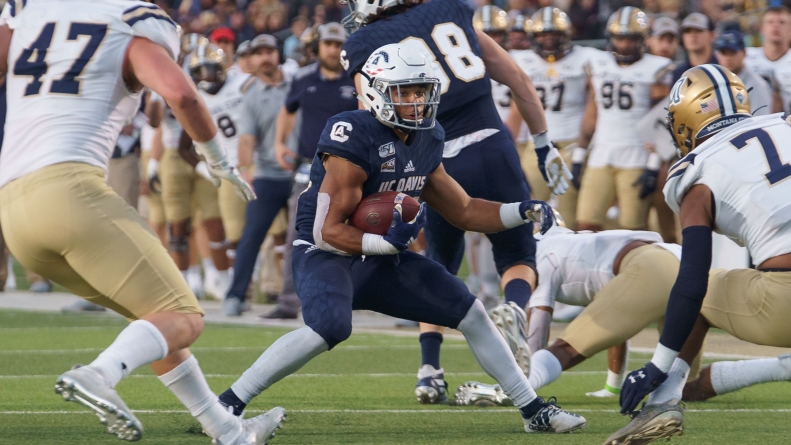 Going into Saturday’s home finale, the UC Davis football team was down to its final strike, with no margin for error remaining in its last-gasp effort to sneak into the FCS playoffs.

Admittedly, the Aggies’ chances were quite slim — they had already lost five games — but there was still an opportunity to make one last impression: a win over highly-ranked Montana State.

But the Aggies squandered a litany of early opportunities to build up a lead and eventually paid the price in a 27-17 loss to the visiting Bobcats.

UC Davis had four first half drives that ended inside the Bobcat 10-yard line but only came away with 10 points to show for it. Instead of pulling away and taking command of the game, the Aggies let the Bobcats hang around and then watched the offense completely sputter in the final 30 minutes of play.

In the closing moments of the third quarter, with the home team holding a slim 17-14 lead, UC Davis Head Coach Dan Hawkins elected to keep his offense on the field for a fourth-and-one play on the Davis 35-yard line. This proved to be the moment that turned the tide in favor of the visitors, as sophomore running back Ulonzo Gilliam, Jr. was halted at the line of scrimmage and Montana State went on to score the final 13 points of the game.

“I’m always going to play to win,” Hawkins said, in his postgame press conference. “I believe in these guys and I don’t like playing not to lose. That was on me. I really felt like we’d get it. We […] ran the ball well and I thought we had options to get it.”

UC Davis managed only 23 total yards and zero first downs in a lifeless fourth quarter, which officially put its playoff hopes to bed.

Outside of one touchdown drive halfway through the third quarter, the Aggies recorded only one first down in the entire second half. This put all the pressure on a defense that was on the field for 21 minutes.

“We just didn’t make enough plays,” said senior quarterback Jake Maier, who finished with zero passing touchdowns for only the second time this season. “We had opportunities and a lot of one-on-one situations. I thought we were a little inefficient on the early downs and got into some third-and-long’s. [Montana State] did a great job, it wasn’t just our fault.”

The Aggie defense held up quite well throughout the evening, considering the unfavorable circumstances and made enough stops to give the team a chance to win. The achilles’ heel for UC Davis were lengthy chunk plays the Bobcats produced, most of which led to scoring opportunities.

Montana State, which employs a run-heavy offensive attack, kept the football on the ground 47 times but also did some damage on a few deep balls into single coverage. A trio of 40+ yard pass completions accounted for over 60% of Montana State’s total passing yards. Additionally, the team broke off runs of 35 and 75 yards, both leading to touchdowns.

As disappointing as the contest was, there was at least one bright spot that fans will always remember about this game. On the final play of the first quarter, Maier found junior wide receiver Darius Livingston open for a 33-yard completion and forever etched himself into the history books, becoming the school’s all-time leader in career passing yards. He will finish his three-year Aggie career with over 11,000 passing yards and will be recognized as a record-holder in numerous other statistical categories.

“Last year, one of the key reasons why we won a championship and Davis football turned a corner is because of Jake Maier,” Hawkins said. “You’re not going to be around a more humble, hard-working and dedicated person. He’s got an unbelievable rage to master his craft. For a school that’s had as many great quarterbacks, he’s going to go down as arguably the best guy to ever play at UC Davis.”

The Aggies marched down the field with ease on their opening drive but were kept out of the endzone on four straight plays from inside the Bobcat 11-yard line. On 4th and one, Maier faked the handoff and rolled out to his right before overthrowing junior fullback Christian Skeptaris, who found himself wide open in the corner of the end zone.

Several plays later, the UC Davis defense created the first turnover of the game when senior linebacker Nas Anesi forced a fumble at midfield, which was recovered by senior defensive lineman Jordan Franklin.

Late in the first quarter, Montana State connected on a long passing gain of 47 yards down the sideline, setting up a five-yard quarterback run for the opening touchdown.

On the next drive, UC Davis’ red zone struggles continued when the offense was unable to find the endzone on three plays inside the seven-yard line and settled for a 23-yard field goal from kicker Max O’Rourke to make it 7-3.

Midway through the second quarter, Maier got the offense rolling with some intermediate throws down the field, starting with an 18-yard diving catch by redshirt freshman wide receiver Lance Babb II. Then, the tight ends got involved as senior Wes Preece and freshman Blake Thorpe recorded receptions of 15 and 16 yards, setting the scene for a 4-yard touchdown stroll by Gilliam to put the home team ahead 10-7.

Shortly before halftime, UC Davis got down to the visitor 12-yard line but was once again stood up by the Montana State defense, which not only kept them from scoring six points but also blocked the ensuing field goal attempt.

Three plays later, the Bobcats jumped back in front 14-10, breaking loose on a 75-yard touchdown run.

After a slow, back-and-forth start to the second half, Gilliam took matters into his own hands and broke off runs of 17, 12 and 18 yards, with the latter resulting in a go-ahead touchdown for UC Davis. On the scoring run, which gave the Aggies a 17-14 advantage, Gilliam showed off his skill moves by juking two different defenders in the open field.

“I just tried to get as many yards as I could each play,” Gilliam said, who finished with 133 rushing yards and became the second running back in school history to break 100 career career receptions. “On some of them, you’ve just got to just stick your nose down and get what you can get.”

Later on, the Bobcats leaned on another chunk play to get into scoring position, this time utilizing a 35-yard quarterback run which set up the go-ahead 5-yard touchdown.

With just over eight minutes remaining in regulation, the Aggies were left with their backs against the wall but produced another lethargic three-and-out.

Montana State pushed the lead to 10 points with a late field goal and the Aggies went down quietly to end the game.

Although UC Davis doesn’t have much left to play for, there is still one more trophy up for grabs in the Causeway Classic versus Sacramento State this Saturday.

The 2 p.m. kickoff at Hornet Stadium gives the Aggies a chance to play the spoiler role against the 8-3 Hornets, who are still vying for their first ever Big Sky conference championship.

“Going into this last week, we’re going to prepare like we’re playing in a national championship next Saturday,’’ Maier said. “We’re going to execute at a high level in practice and clean up the details. That’s just what we’re trying to do here, regardless of where we’re at in the standings.”