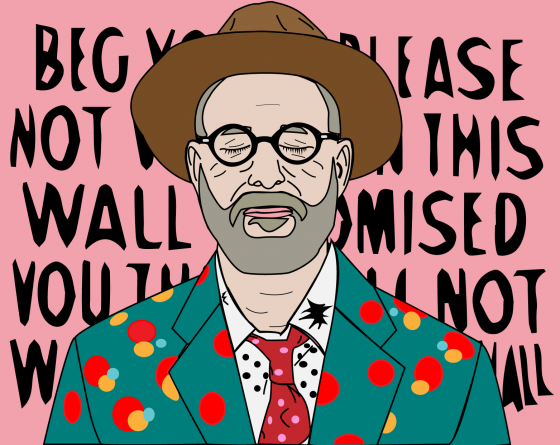 I never found myself captivated by poetry until my friend introduced me to Kenneth Goldsmith. The more I looked into Goldsmith and his work, the more fascinated I was with not only his poetry but his conception of it. It was so blatantly uncreative that its creativity became astounding.

Kenneth Goldsmith is a poet and the founding editor of “UbuWeb” — an online educational resource for avant-garde material — but he is no ordinary poet. No matter which of his works you read, one thing becomes immediately clear: Goldsmith isn’t searching for words to emotionally and “creatively” describe his thoughts, ideas or state of being (at least not in the traditional sense). He is one of the leading poets of the conceptual poetry movement, which is “self-described by its practitioners as an act of ‘uncreative writing’” according to poets.org.

Goldsmith’s poetic style seemed illogical to me, if not lousy, when I first encountered it. In a video with the Louisiana Channel —  a non-profit created by the Louisiana Museum of Modern Art in Humlebæk, Denmark —  he explains that, “Poetry is all around us. We just need to reframe it and suddenly it is our own.”

Goldsmith takes this sentiment literally. In the video, he illustrates his conception of poetry by reading a “poem,” which is really just an article from a newspaper he happens to be holding. He titles the poem “French writer wins Nobel,” and then proceeds to read the article in the paper, verbatim.

I can’t quite articulate why Goldsmith’s work is so intriguing, but it might be because it challenges the way I was conditioned to view creativity.

“I feel that writing from the heart is actually much more uncreative than the kind of ideas I’m proposing,” Goldsmith said in the Channel’s video. “I want to reinfuse it [poetry] with ideas of plagiarism, insincerity, inauthenticity — all the things that were never allowed to be a part of the creative practice.”

I’m not entirely sold on Goldsmith’s vision of creativity, but I admit that I counted the syllables in each chapter of his book “No. 111 2.7.93-10.20.96” to verify that the number of syllables in every word actually corresponded to the chapter number, as he intended. Goldsmith’s book is a prime example of the movements’ attention to a “creative process” as opposed to a creative product.

Practically all of Goldsmith’s work is appropriated, but that doesn’t necessarily mean it’s uncreative.

For example, his book “Weather,” is a transcription of a minute of each day’s weather report over the course of a year, separated by season. Goldsmith sees it as “a classical narrative of the four seasons evolving,” according to his interview with The New Yorker. Even though “Weather” is entirely a transcription, it’s hard not to be intrigued by the unconventional and peculiar process in which the poem was written.

His book “Traffic” compiles transcriptions of traffic reports on a holiday weekend over a 24-hour period. Goldsmith read “Traffic” at the White House Poetry Night in 2011 and was met with a positive response.

“So the weirdest, most avant-garde, most appropriated text was the one that got the biggest response because it was in the language that everybody could understand. It was vernacular, so this is radical populism,” Goldsmith said in reference to his White House performance. “People say the work that I do is undecipherable, [that] nobody can understand it. But in fact, the radicality of it is its democracy, is the fact that everybody can understand it.”

I have merely scratched the surface in my attempt to understand Goldsmith and other avant-garde works in and outside of the conceptual poetry movement. But through this process, I gained a better understanding of the dynamic and ever evolving nature of the humanities.

We see growth in technology and the sciences as innovative, yet perceive developments in the humanities, like those spurred on by Goldsmith and others, in a different way. But applying a rigid standard on what qualifies as “creative” undermines the value of creativity itself.

Goldsmith’s work may seem dull and mundane, but it also offers a new approach to storytelling that pushes the boundaries of art, ultimately forcing us to question what it really means to be “creative.”