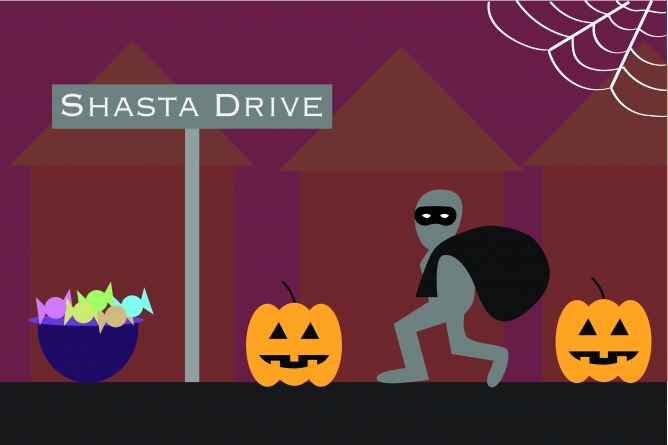 Davis police continue to investigate a series of eight armed robbery incidents and two car-jackings that occurred in a seven-week period between late September and mid-November. The Davis Police Department has issued three separate warnings to the Davis community regarding the incidents over this period.

On Nov. 13, police issued their most recent warning through the community alert system, Nixle. According to the Nixle release, two female victims reported being approached by a male suspect on the 1200 block of Alvarado Avenue after exiting their parked vehicle on the evening of Nov. 12. The suspect reportedly had exited a white Honda Odyssey minivan.

“The suspect pointed a handgun at the victims and demanded they leave behind their keys and cell phones,” the release read. “The suspect then entered the victim’s vehicle, a silver 2007 Audi 4 door sedan, license 5VBZ037, and left the area heading west-bound on Alvarado Avenue near Sycamore, followed by the minivan which was occupied by an additional three suspects.”

Davis Police said they later identified that the minivan had been reported stolen to the Woodland Police Department. In the release, they said the investigation remained open.

The release included descriptions of three of the four suspects, who police said should be considered armed and dangerous. The gunman was described as a “Black or Hispanic male adult,” approximately 5’10” in height, wearing a white sweatshirt with a black bandanna covering his face. A second suspect was described as Hispanic, roughly 5’6” with a light complexion, wearing a bandana of indeterminate color, and the third simply as a Black male with a “tall, thin build.” There was a fourth suspect present with no available description, police say.

The latest warning came half a month after another release on Nov. 1 from Davis police detailed two armed robberies, in addition to one attempted and one successful car-jacking incident on Halloween night. The first incident occurred in the parking lot of an apartment complex on Shasta Drive, according to the release. Two female suspects reported being approached by two male suspects in black hooded sweatshirts, ski masks and gloves while sitting in their vehicle.

“The suspects produced two handguns and told the females to exit the car and lay down on the ground,” the release read. “While the suspects were rummaging through the victim’s vehicle in an attempt to locate the car keys, one of the victims fled the scene on foot. Unable to get the vehicle started, the two suspects stole a cellphone and a small amount of cash.”

The suspects then fled the scene to a nearby getaway car, a four-door black sedan, which was driven by a third unknown suspect, police said.

Within an hour of responding to the Shasta Drive incident, police responded to a second report of armed robbery on 7th and D St. A lone female victim had just parked her car when she was approached by two men, one of whom told her to surrender her property while threatening her with a black handgun, police said. After taking the victim’s wallet, phone and keys, the two men fled in her recently purchased Honda Civic with dealer plates.

On Nov. 4, Davis police issued a follow-up report to the Halloween incidents on Nixle, saying that they had recovered the stolen vehicle after a pursuit and arrested a 17-year old Woodland resident for evading police and weapons charges. They also noted that their subsequent investigations had connected the two Halloween armed robberies and that they would continue to work with Woodland police to “[follow] up on additional suspects and charges.”

These three incidents come on the heels of five other armed robberies that occurred between late September and early October, for which the police issued a warning on Oct.10.

“During the last few weeks there have been 5 armed robberies reported in Davis,” the October release read. “In all 5 cases the suspect(s) have approached the victim on a street or sidewalk and threatened the victim with a handgun before taking property. Property taken has included personal electronics (phones and computers) along with wallets.”

Police have identified and arrested at least one suspect associated with these incidents. Eric Rodriguez was taken into custody in Woodland in connection with an armed robbery on Oct. 5 in Davis, according to the Davis PD Facebook page.

In each of the three releases, police have asked anyone with information about these incidents to contact the Davis PD non-emergency number at (530) 747-5400. They also offered tips for Davis citizens to reduce their risk for personal harm by exercising caution.

“1. Avoid walking alone late in the evening hours,” each release read.  “2. If you must walk alone, avoid dark unpopulated areas; 3. Avoid using or being distracted by your cellphone while in public; 4. Cooperate if you are confronted by an armed or potentially armed person; property can always be replaced; 5. Report suspicious persons and/or behavior; 6. Activate tracking software on phones and electronic devices.”