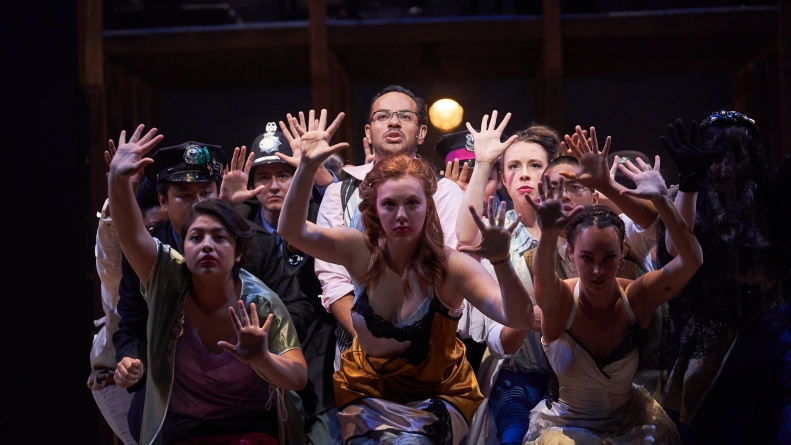 Photo Credits: UC DAVIS DEPARTMENT OF THEATRE AND DANCE / COURTESY. The Ensemble of UC Davis production of The Threepenny Opera.

This November, the UC Davis Department of Theater and Dance put on a production of “The Threepenny Opera.” The play was written by Bertolt Brecht and Kurt Weill and first hit the stage in 1928.

The Davis rendition of the musical was co-directed by performance studies doctoral student Regina Maria Gutierrez Bermudez and Peter Lichtenfels, a professor of theater and dance at UC Davis. Granada Artist-in-Residence Jeffrey Saver directed the music in the show.

“What I love about [the play] was that it gave people who were outside the mainstream of society the agency of voice,” Lichtenfels said. “I don’t think I know as complex and difficult and interesting a musical as this.”

MFA student Diego Martinez-Campos stars as Macheath, a notorious criminal and the antihero of the play. Martinez-Campos has a strong presence on stage and takes command in every scene he is in.

“I am very grateful for the opportunity to play Macheath, which, to be honest, was completely unexpected for me,” Martinez-Campos said. “I have had various challenges with this role, mostly because it is my first time playing a lead role, and it’s my second time performing in a musical theatre production. I still have a lot to learn about this realm of performance. It’s a great role to play because it has a dark texture and tone to it, which is something truly out of my comfort zone.”

Second-year theater and dance major Chloe Wasil shined as Polly Peachum, a young woman who marries Macheath after knowing him for just a few days. Wasil is captivating in her role; she performed the musical numbers with sass and sensuality, and her voice sent chills throughout the audience.

The music in this production was impressive — Diego’s rendition of “Ballad of Mack the Knife,” specifically, was powerful. At the close of Act I, Tiffany Nwogu, a fourth-year theater and dance major, and Sophie Brubaker, a third-year theater and dance and human development double major performed the exuberant “Life’s a Bitch” along with Wasil, one of the most memorable songs of the night.

Although this play was written in the early 1900’s, the themes and energy depicted on stage are as relevant as ever. The stage design was fascinating and enchanting, and the musical score was performed beautifully. The hard work of the department on this production lead to an incredible night of theater.

The show’s second weekend of performance will be Nov. 21-23 in Main Theater in Wright Hall.