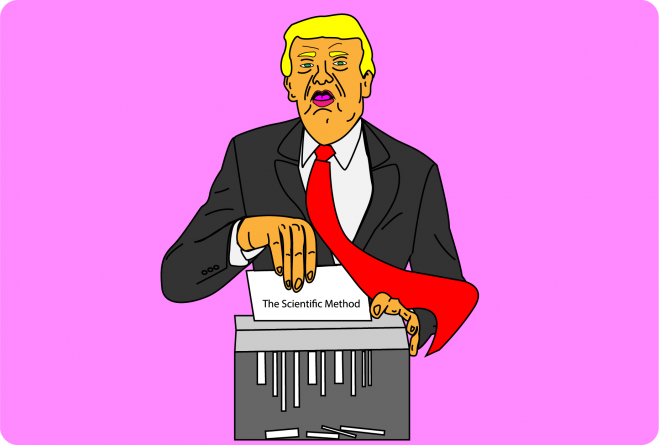 It’s funny because more Americans will get sick and die as a result. Get it?

President Donald Trump spends his time distracting America by screaming and whining about what an innocent, perfect-call-making, stable genius he is (as any stable genius would). All the while, the environmental deregulation crusaders planted throughout his administration have been busy demonstrating quite high levels of stable, albeit evil, genius.

There’s perhaps no better embodiment of this than the proposed “Strengthening Transparency in Regulatory Science” rule. Sounds pretty great, right? Who wouldn’t want strength, transparency and [“everybody’s favorite category”] — SCIENCE? That certainly goes down a lot smoother than if the rule was named based on what it’s actually intended to do. That name, whatever it might have been, would go down about as smooth as swallowing a whetting stone coated in shoe polish.

Under the guise of transparency and an obviously insincere commitment to scientific integrity, this rule is actually an ingenious way to compromise all future, and potentially current, environmental regulations in one fell swoop. The rule will ban the EPA from justifying regulatory decisions with scientific studies for which all underlying models and raw data are not made public. On the surface, this sounds just fine too. But the problem is that meaningfully regulating harmful pollutants in our air and water often requires studies that use private health and medical data — you know, to assess health. As many publications have noted, this rule would ban justifying regulations with studies like the landmark “Six Cities” report of 1993, which used confidential medical information to show that Americans die faster in cities with worse air pollution. The raw data is not public, but it has been confidentially shared with independent researchers who have successfully replicated the findings.

Since former EPA Secretary Scott Pruitt proposed the rule in April 2018, industry groups, Republican lawmakers and conservative media have hailed it as a victory against what they refer to as the EPA’s “secret science” that is “withheld from the American people.” But as Naomi Oreskas writes in Nature, groups that lobbied hard for this rule have been hypocritically silent when it comes to publicly disclosing data on “composition of fracking fluids, or the information confidentially supplied by companies to register pesticides with the EPA.”

The EPA claims that the rule allows for all research to be independently validated and reproduced, addressing the “replication crisis” in academia. The crisis of science reproducibility is a legitimate concern but mainly in biomedicine and psychology. The EPA also claims that the rule follows the recommendations of the Bipartisan Policy Center’s Science for Policy Project and the Administrative Conference of the United States’ Science in the Administrative Process Project and is “consistent with data access requirements for major scientific journals like Science, Nature and Proceedings of the National Academy of Sciences.” This is not true. These three journals issued a joint statement denouncing the rule and explaining the allowances they make for confidential data sharing with other academics and scientists — allowances that the EPA proposal doesn’t make. The International Society for Environmental Epidemiology has also made comprehensive arguments against the rule.

Remember: The mission statement of the EPA is to “protect human health and the environment.” How might one protect human health without considering how pollutants impact human health? That’s quite a pickle. I’m stumped. I guess scientists always have the option of disclosing private medical records. But that’s illegal, as it should be. Just a coincidence that the writers of the rule left that as the only “viable” alternative, I’m sure.

When I first researched the proposed rule, I feared that it was destined to become yet another tale of Trumpian deviousness that would never see the light of day. Luckily, The New York Times ran a front-page story on the rule earlier this month when a new draft of the rule surfaced. Many other publications quickly picked up the story, but unfortunately, the relentless pace of the newscycle seems to have eaten this important story alive.

In September, EPA Secretary Andrew Wheeler testified before the House Committee on Science, Space and Technology on a number of pressing environmental issues, including the  proposed science transparency rule. Wheeler said during that testimony that the rule would not apply retroactively to regulations that are already on the books. Yet the recent story in the Times notes that the updated proposal leaves open the possibility of applying the rule retroactively. This means that existing regulations could be significantly weakened when they are renewed since many public health studies with private data would be ignored in the decision making process. I’m sure Wheeler simply misspoke during his testimony, as I’m confident that someone as committed to transparency as he is would never even consider lying under oath.