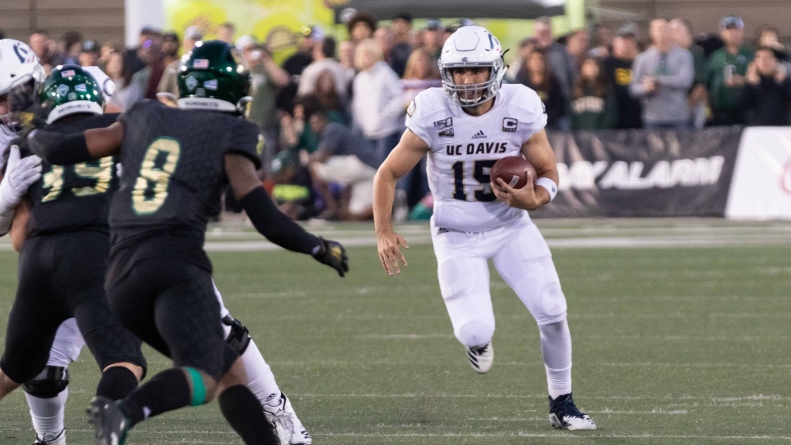 Photo Credits: BENJAMIN CHENG / AGGIE. UC Davis quarterback Jake Maier (15) runs to gain yardage during the last game of the 2019 season for the Aggies at Sacramento State on Saturday, Nov. 23, 2019.

UC Davis football stutters in second half of 27-17 loss

The UC Davis football team capped a disappointing 5-7 season with a 27-17 loss to rival Sacramento State in the 66th Causeway Classic on Saturday afternoon at Hornet Stadium. The Aggies went blow for blow with the co-Big Sky champion Hornets in the first half but were shutout in the final 30 minutes and watched Sacramento State rattle off 24 unanswered points.

Saturday’s rivalry showdown was seen by an announced crowd of 19,882, the second largest in Causeway Classic history. It was a lively and festive atmosphere all day long, from the early tailgating hours before kickoff to the loud noise ringing throughout the stadium up until the final whistle. Unfortunately for the Aggie fans who made the 22-mile trek to East Sacramento, it was a performance symbolic of the entire season.

Just like last week’s 27-17 loss to Montana State, the Aggie offense completely sputtered in the second half, managing just a half dozen first downs and 127 total yards. UC Davis found itself in numerous short yardage situations on third and fourth downs but simply could not make enough impactful plays to move the chains.

Overall, the Aggies were held to under 300 yards of total offense for only the third time in 12 games this season. Sophomore running back Ulonzo Gilliam was one of the few standout players on offense, amassing over 100 scrimmage yards for the eighth time this season.

One of the most telling aspects of the final box score was that only four different Aggies recorded a reception, a number well below the normal average for UC Davis.

Senior quarterback Jake Maier, playing in his final collegiate game, was unable to spread the ball around like he normally does and was often forced to check it down to Gilliam, who had eight catches.

On three different occasions in the second half, the Aggies were faced with a short fourth down inside Hornet territory, but Hawkins opted to punt the football every time. This was a stark contrast to the aggressive-minded decision-making he has typically displayed throughout his coaching career. In many games earlier in the season, Hawkins has treated these situations as opportunities to jumpstart his offense when it’s struggling, especially when he can fall back on a capable defense on the other side of the ball.

Nonetheless, UC Davis forced its opponent to put together extremely long drives, thanks to the excellence of junior punter Daniel Whelan, who pinned five of his seven punts inside the Hornet 10-yard line.

“Danny was redzone punting so great, so we just thought we’d go pin them again,” explained head coach Dan Hawkins. “He was knocking them down inside the five. I had a lot of confidence in him. As good as [the Hornet] offense is, you don’t want to give them a short field.”

Saturday’s result was the culmination of a frustrating 2019 season and an accurate representation of the entirety of the campaign.

“It’s probably a microcosm of our whole season,” Hawkins said. “I thought we played well, played hard and finished. Now, we’ve just got to capture some details and that all starts with me. I’ve got to be a better coach.”

UC Davis got off to an encouraging start and had high hopes of spoiling what turned out to be a historic day for Sacramento State, which claimed a share of the Big Sky Conference title for the first time ever. The opportunities were all on the table for the Aggies to finish strong, with the defense playing exceptionally well against one of the top offenses in the FCS and dual-threat quarterback Kevin Thomson.

At the end of the day, the Aggies simply weren’t sharp enough when it came down to the smallest details of the game — something that Hawkins has consistently said is the difference between this season and last year’s Big Sky championship team. The collection of critical missed tackles, dropped passes and penalties on Saturday were exactly the type of mistakes that plagued the team all season long.

“Our defense was doing a pretty good job, but we just kept putting them back on the field,” Hawkins said. “We couldn’t make a play offensively and had too many three-and-out’s. We just couldn’t score.”

Last year, the Aggies played in a lot of close football games and found a way to make just enough meaningful plays in the most important moments to come out victorious. This season, they were in many of the same situations but lacked the execution of marginal details necessary to come out on top.

With UC Davis clinging to a 17-13 lead early in the fourth quarter, Sacramento State started an offensive drive at its own four-yard line, thanks to Whelan and the punt coverage team. Four plays later, the Hornets were celebrating the eventual game-winning touchdown, a 51-yard pass completion down the sideline.

Several minutes later, Sacramento State put the icing on the cake when Thomson streaked 33 yards for a touchdown.

Even with the Aggies holding a lead for the majority of the game, Sacramento State was always within striking distance due to UC Davis’ offensive struggles.

After each team traded a punt to begin the contest, the Aggies drew first blood when junior wide receiver Khris Vaughn escaped behind the last line of defense and took it all the way to the house for a 76-yard touchdown reception.

The explosive scoring strike, Vaughn’s ninth touchdown of the year, was the longest play from scrimmage for UC Davis this season. It also marked the moment that Maier officially became the first player in school history to eclipse the 11,000-yard mark for career passing yards.

Sacramento State responded with a never-ending 18-play drive of over eight minutes that ended with a 24-yard field goal. The Aggie defense made some critical stops deep in its own territory and nearly came up with an interception at the goal line, to keep the Hornets out of the end zone.

Early in the second quarter, UC Davis was the beneficiary of two 15-yard Hornet penalties that kept the chains moving, including a roughing the passer call and a pass interference foul. Kicker Max O’Rourke capped the possession by hitting a 39-yard field goal straight through the uprights to extend the lead to 10-3.

Later on, the Aggies were forced to punt, and again, Whelan placed a perfect kick that the UC Davis coverage team was able to down at the one-yard line. Two plays later, redshirt freshman linebacker Da’Von Frazier leaped at the line of scrimmage and intercepted the football, before taking one step into the end zone for the pick-six. At the time, UC Davis held its biggest advantage of the day: 17-3.

Shortly before halftime, the Aggie defense nearly made another goal line stand, but the Hornets were able to punch it into the end zone on a fourth-and-goal play to make it 17-10.

After a grueling three-month stretch, one that often felt like an emotional rollercoaster ride, the UC Davis football team will finally be able to recover from the physical and mental fatigue it has endured and enter a long offseason full of preparations for the 2020 campaign.

There’s no doubt that this team kept its fans on the edge of their seats and delivered a heavy dose of captivating action week in and week out.

“It’s always a journey and a continuum,” Hawkins said. “We had some really beautiful moments and we played a lot of very good football teams.”

While the Aggies were unable to make a return to the FCS playoffs for the second year in a row, this is still a program trending in a very good direction with tons of positive momentum. Hawkins and his staff have tirelessly recruited the next generation of Aggie stars, while Director of Athletics Kevin Blue and the UC Davis athletics department continue to make strides off the field. The new student-athlete performance center, which includes a practice field for the football team, should be open in the near future.

Whichever way you choose to look at it, there’s never been a better time to be an Aggie.