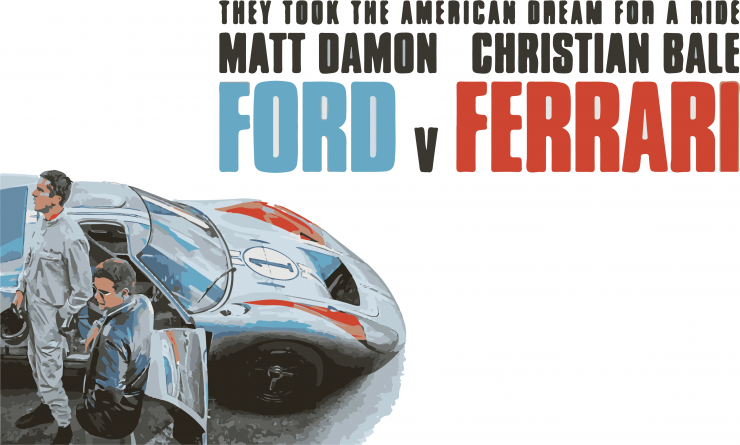 Apple vs. Microsoft, capitalism vs. communism, Batman vs. Superman, Ford vs…. Ferrari? Released into theaters on Nov. 15, “Ford vs. Ferrari” accelerated into the box office, racking up over $64 million in its first week. The film is a high-octane biopic saga of man and machine, featuring one of auto racing’s most tense and legendary rivalries. Pumped full of brotherly love, corporate shenanigans and sultry sports cars, the two-hour-and-thirty-two-minute film provides non-stop entertainment.

The plot shifts into gear when an attempt by Ford Motors to acquire Ferrari from Enzo Ferrari spoils. During the negotiations, Enzo has a few choice words for Ford’s own main man, Henry Ford II. To the delight of autophiles, and now perhaps cinephiles, this heated exchange ignited one of the largest feuds in racing history.

The film centers around two Herculean figures in the racing world: Ken Miles, played by Christian Bale, and Carroll Shelby, played by Matt Damon. Miles is a fiery Englishman with a sweet tooth for speed and Shelby is a legendary automaker and charismatic businessman. The two work together after Shelby approaches Miles to join him on the newly assembled Ford racing team to take on Ferrari at the 24 Hours of Le Mans — the most prestigious racing event in the world. The dynamic between red hot Miles and cool and collected Shelby is pivotal in the development of the plot and one of the most compelling aspects of the film. The on-screen chemistry between the two Hollywood veterans is undeniable, even if it has some extra injected testosterone for entertainment value.

Christian Bale, a.k.a. human Play-Doh, once again pulls a rabbit out of the hat by proving he can shape himself mentally and physically to become just about any character. Around this time last year, Bale played the critically acclaimed role of borderline-obese Dick Cheney in Vice. In order to play the wiry Miles, he shrugged off 70 pounds. I don’t know if this is impressive or disturbing, but I’m leaning toward the latter.

Bale is a spitfire and a standout. He brings an “I don’t give a rat’s ass about you if you aren’t made out of metal alloy and have a bajillion horsepower” attitude to almost every interaction, but simultaneously shows emotional complexity when playing a dedicated dad and loving husband to wife Mollie, played by Caitriona Balfe. In the intimate moments with his son, we get a clear insight into the deeper motivations behind his need for speed.

In typical Hollywood fashion, Mangold tweaks a few key details to keep the storyline cohesive and ham up the drama. In one memorable scene, Henry Ford II takes a wild breakneck test ride with Shelby and the Ford GT, where the self-proclaimed “Deuce” proceeds to take a deuce in his pants and cry in sheer terror. Although I sincerely wish this had occurred in real life, there is no outside information to back it up. For the most part, however, Mangold is able to keep the story’s integrity, portraying the give and take between the Ford Racing Team and the corporate big-wigs. Josh Lucas plays Ford’s PR man, Leo Beebe, who works to undermine Carroll and Miles in the name of saving corporate profits and face. As the unequivocal bad guy, Lucas does an almost too good job at synthesizing all the negative stereotypes of corporate America into one grade-A prick.

Mangold and the camera team capture the glorious chaos of Le Mans putting the audience in the driver’s seat, feeling the gears churn and the pistons fire. They piece together point-of-view driver shots where the audience is one with the driver. The camera tracks the race from the ground up, giving the movie a nitty-gritty, in-the-trenches perspective. You are front row to the manic speed and devastating collisions that unfold on the road. The heart-rattling racing paired with the drama even kept me, someone who is already familiar with the story, on the edge of my seat.

Despite all the film’s many upsides, I thought the machismo element was overblown. After butting heads, Shelby and Miles tussle on a neighborhood lawn, strewing groceries everywhere and looking like goddamn fools as Mollie looks on in amusement. I don’t contest that some unfettered masculinity was warranted (it’s about friggin race cars), but continuing to highlight this aspect muddled the character of the film.

The film had everything I wanted and expected from a story about 200 mph race cars and the massive egos that accompany them. The synergy of the cast paired with the blistering racing cinematography made for a time well spent at the theatre. When the rubber meets the road, “Ford vs. Ferrari” may not be flawless, but it’s definitely a winner.