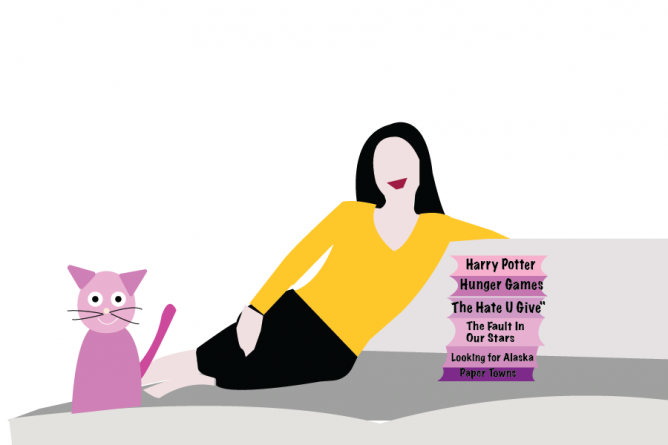 For better or worse, I credit the development of my formative teenage years to young adult literature. Over time, I have slowly moved away from YA, but I still think there’s a lot of value in these books, even for older readers.

I cannot mention my appreciation for YA books without making clear my love for the “Harry Potter” series, which is objectively one of the greatest book series to have ever been written. “Harry Potter” is timeless and ageless, not just because of its creative and incredible story, but because it touches upon themes of love, family and friendship that transcend any age constraints. I still read the entire “Harry Potter” series every other summer. I do this partly out of nostalgia, but there’s another part of me that craves for a magical, yet entirely authentic, telling of ideas, themes and life experiences to which I can relate.

That’s really the reason why the YA books of my (younger) teenage years will always have a special place in my heart — especially those of the realistic fiction genre. In middle school, I had read every Sarah Dessen book written up to that point, and I was always reading the newest and most popular YA books. I couldn’t get enough of reading about other people’s lives, even if they seemed wildly similar to mine.

Many people view YA novels as silly and focused on trivial issues. Most of these books don’t feature complicated themes or take place in tumultuous historical turning points. Many of the books that I became obsessed with were casual, if not somewhat banal, with their storyline. There’s no dramatic escapade that the characters go off on — rather, these books were reminiscent of the daily lives of its middle school and high school readers. Like most of us in high school, the characters in YA novels were juggling extracurriculars, jobs, studying for the SATs and falling in and out of friendships and relationships. Despite how taxing, ugly and confusing these real-life experiences often can be for young adults, YA books largely discuss them.

Of course, some of the criticisms about YA are justified, but it’s unnecessary to minimize the issues and topics covered in YA to being petty or mundane. Most of the books I read in middle school and high school focused on, and were written for, young teenage girls like me. Drama, fights, breakups and heartbreaks are all common features of teenage lives, so it only makes sense that many YA books reflect that.

But it would be remiss of me to not discuss the obvious shortcomings of YA novels, which I find difficult to ignore. For instance, the lack of diversity in characters as well as the authors is astounding. On the one hand, I love that these characters go about their day-to-day lives in a relatable way. But, on the other hand, I wish I had the opportunity to read more books about characters who lead the quintessential American teenage life as a first-generation American or as a person of color. This doesn’t mean writing a storyline that is explicitly and solely centered around these identities, but rather, writing books that tell these familiar stories of American diversity from a unique perspective.

That being said, there are authors who are gaining traction for their diverse storylines. Angie Thomas’ “The Hate U Give” tells another story about a high school girl but through an authentic lens. Starr Carter, the protagonist of “The Hate U Give,” isn’t too different from the characters in other YA novels. She’s a high school student who studies, plays sports and likes spending time with her family, friends and boyfriend. But she is also grappling with, and navigating, the structural systems of inequality that have hurt, and even killed, her loved ones and members of her community.

Stories like Thomas’ “The Hate U Give” make for impactful reads. They give teens the opportunity to meet and connect with a character who seems exactly like them, but simultaneously provides a unique perspective which affects how the character interacts with their society at large. This not only gives young people of color stories they can relate to, but gives readers who can’t relate an opportunity to better understand people with different backgrounds.

YA books are fun, compelling and important reads. And while many of their themes may lack substance, they still provide significant value to readers, allowing them to better understand themselves and their peers.