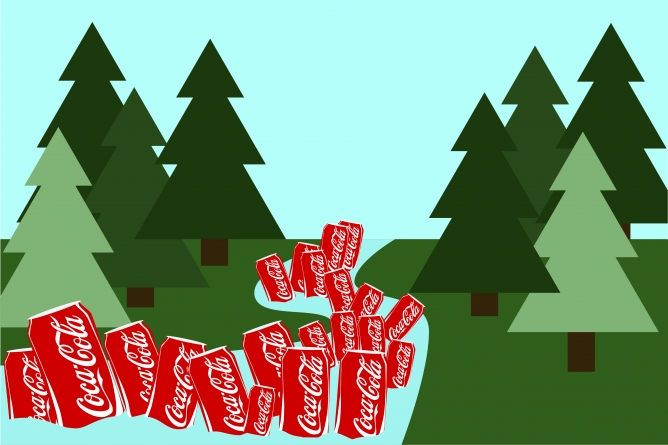 A case study in the confounding contradictions of corporate environmental stewardship

Given the ruthless way in which corporations have vandalized the environment over the centuries, it’s perfectly reasonable to be hesitant to include them in conversations about sustainability planning. I’m sure some of my classmates probably saw the speaker as nothing more than a corporate apologist. On one hand, corporations are largely responsible for some of the worst environmental crises we face. But on the other hand, I don’t think we’d be better off as a society if we didn’t try our best to include corporations in our solutions. But on the third hand (which we’ll eventually mutate to have because of all the toxins in our water), many corporations are probably just in it for the PR. To earn some green cred.

Regardless, we have a very interesting situation here with lots of uncomfortable ambiguities — ambiguities that are worth reading more about. After I did just that, a peculiar ad started popping up on my Facebook newsfeed from the Coca-Cola Company about its “commitment to water replenishment.” Purely a coincidence, I assume.

The post’s caption read, “We believe the health of our water sources is essential to the health of our communities. Find out more about the work we’re doing to restore our watersheds. #CocaColaRenew.” Soothing guitar music played as several peaceful, pleasant, [old, white] men canoed down a river in a peaceful, pleasant, serene valley. Text appeared on the screen explaining how Coke is “replenishing every drop of water” it uses. This ad is clearly supposed to make me feel great about Coke. Like it’s the real thing.

The ad’s aesthetic and feel-good mood reminded me of the iconic “Hilltop” Ad. But it also reminded me a bit of that old fake car commercial meme that made the rounds a while back. I half expected a screaming monster to jump out and scare me at the end. Eventually, it did, only it was even worse. That massive, hideous, overly ornate cursive of the Coca-Cola logo popped up on the screen, superimposed over the serene river valley. As I would soon learn, the environmental hypocrisy of the Coca-Cola company made this image embody something far scarier than that silly car commercial monster.

I am not someone who has ever really cared about Coke or even liked Coke. But this “water replenishment” ad piqued my interest because it was trying really hard to convince me that Coke is a friend of the environment — a message that is at odds with the recent headline naming Coke as the world’s worst plastic polluting brand. To gain more perspective, I decided to check out Coke’s website. More of a blog than a website, “Coca-Cola Journey” is absolutely overloaded (intentionally, I assume) with page after page about everything the company is doing to mitigate its adverse environmental impacts, promote sustainability and give back to communities. I couldn’t even finish reading one page without getting pop-ups saying things like, “RECOMMENDED FOR YOU: Small Decision, Big Impact: Creative Campaign Highlights all the Good That Comes From Drinking Honest Beverages.”

Clearly, Coke has managed to continue hiring good ad men and PR representatives since they had Don Draper, because that website is nothing but a maze-like digital shrine to the environmental champions of our time: Coca-Cola.

Except they really aren’t. Coke is quite proud of that “water neutral” talking point that I previously mentioned, but it seems like they decided on the goal first and only then came up with the easiest and cheapest way to define it. Somewhat unsurprisingly, Coke does not replenish every drop of water it uses. The company only counts the water used to fill the bottles, ignoring the water used in the rest of the supply chain, which represents a substantial amount of water. Apparently, about 99% of the water the company uses isn’t really accounted for.

Meanwhile, Coke has been embroiled in controversies across the globe. These stem from them depleting local water resources in order to supply bottling and packaging plants, sucking wells dry and getting accused of trying to effectively privatize public water resources.

The Verge reached out to Coke with a series of questions on its sketchy water use, and Coke replied with a defensive and contradictory statement that failed to answer many of the questions. The statement isn’t even consistent in its use of the Oxford comma — something that I know would drive my desk editor, managing editor, and editor-in-chief at The Aggie absolutely crazy.

Despite all of the hypocrisy, I think that the environment is in a better place if it does have companies like Coke continuing to invest in sustainability and environmental protection. It’s good that Coca-Cola and PepsiCo recently abandoned the pro-plastic lobby. It’s good that Coke recently gave the World Wildlife Fund $20 million to do conservation work. Even if Coke is only motivated by PR, the environment still stands to benefit. We just have to continue working with them when they need consultation and calling them out when they come up short and deceive people. And maybe we could drink less Coke too. I’m already there.