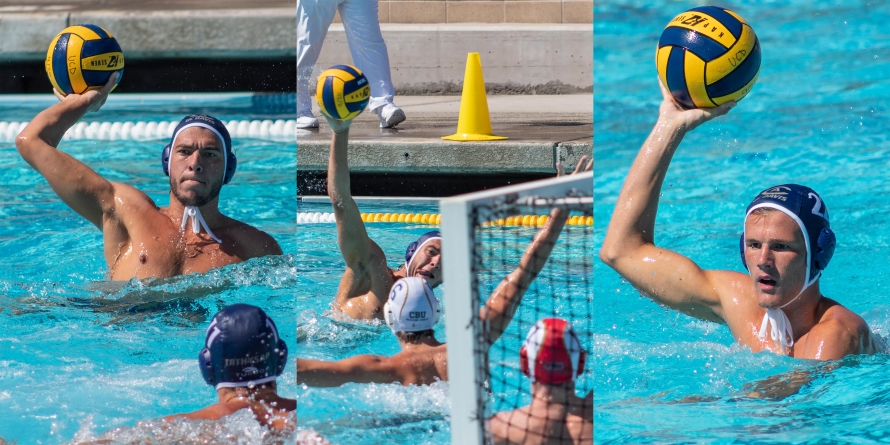 “I couldn’t be more proud of how hard our players have worked to get to this point. It’s a lot of work. It’s a lot of hours, and it’s not always pleasant,” said Child And Meisel Families Director of Men’s Water Polo Daniel Leyson. “We stuck together through thick and thin and came together at the end. We’re honored to represent our conference at NCAA’s, and we can’t wait to find out who we play.”

The WWPA Conference Tournament took place on the weekend of Nov. 22-24 in Riverside, Calif. The Aggies came into the tournament as the league’s top-ranked team and had faced all seven other WWPA teams before, making them ready for play.

To get to that championship game, UC Davis had to first beat out Fresno Pacific, which it did in dominating fashion. Redshirt-sophomore center defender Matthew Whipple led the Aggies with four goals, while UC Davis gave up a season-low three goals in a 21-3 win.

Heading into the semi-final match, the Aggies knew they would need to continue to play their game and come out strong. Their opponent, California Baptist, was fourth-ranked and put up a tough fight, but the Aggies did not let up. Trailing by two at the half, UC Davis roared back, as junior attacker Jack Stafford netted three second-half goals to help push the momentum back onto the Aggies’ side. Both teams excelled defensively in the final quarter, thanks in part to junior goalkeeper Jonah Addington, who accumulated 10 saves in the match. UC Davis ultimately prevailed 14-9, securing a spot in its fifth straight WWPA title game.

On Sunday, Nov. 24, the Aggies came prepared to seek vengeance, as they took on reigning WWPA champions, UC San Diego. In 2018, UC Davis fell to the Tritons in a nail-biter by a score of 11-10. In their three previous meetings this season, the team from La Jolla got the better of the Aggies twice, but UC Davis took the most recent contest in its final game of the regular season. Now, facing UCSD for the fourth time in 2019, the Aggies knew it was their chance to return to the National Collegiate Water Polo Tournament.

Big plays were made for the Aggies by several players: junior utility Kyle Reilly finished with two goals and a pair of assists, senior attacker Holden Tamblyn tallied a goal and three assists for a four-point day, and the man in the cage, Addington, recorded 14 saves.

In addition, redshirt-sophomore center defender Spencer Towill, sophomore center Nir Gross and senior attackers Yurii Hanley and Max Somple all finished the game with a pair of goals each.

The match stayed level throughout the first quarter and into the second quarter, but then UC Davis began to distance itself from its competition. With the game tied at three early in the second period, the Aggies rattled off eight straight goals to stretch their lead to 11-3 into the third quarter. Seven different UC Davis players scored goals during the Aggies’ eight-goal run. Addington also blocked another penalty shot in the second half.

The Aggies put the game on ice with Somple, Hanley and Reilly netting one more goal each in the fourth — capturing a 14-5 win for UC Davis.

One of the main reasons UC Davis was able to pull away and take over the game was Addington’s tireless efforts in front of goal. He was named the WWPA Tournament Most Valuable Player — rightfully so as he helped keep the Tritons off the scoresheet for 14 minutes between the second and third quarters and accumulated a tournament-best .653 save percentage. Addington has 178 saves this season and an average of 10.47 saves per game, making him a defensive powerhouse.

“We felt like we were going to get better as the season went on because many of our players were new to their roles, and be able to catch up with some teams with more experience,” said Leyson. “We gradually got closer to [UC] San Diego and were able to take the last two.”

The championship win was UC Davis’ ninth straight victory, meaning that the Aggies now have a record of 16-7 on the season.

Their season is not over yet, as now the Aggies will head to Stockon, Calif. on Thursday, Dec. 5 to face Pepperdine in the first round of the NCAA tournament.