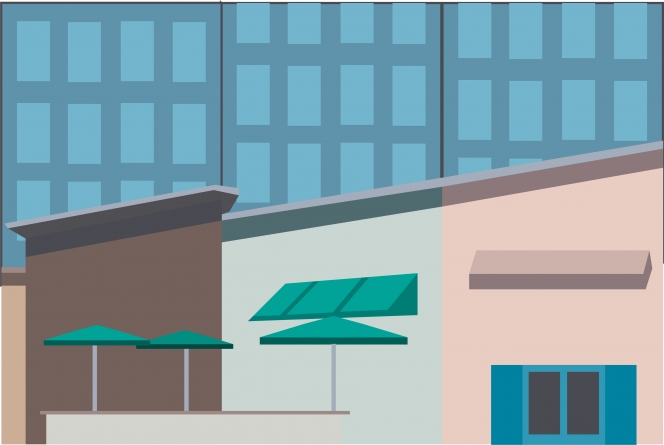 Proposed project would replace shops on Russell Blvd. with a seven-story structure for mixed residential, retail use

In early November, city officials released a draft of an Environmental Impact Report (EIR) for the proposed University Commons project. Plans continue to move forward to redevelop the University Mall (UMall) on Russell Blvd. into seven stories of mixed-use housing, parking and retail space that would add 264 new multi-family residential units to the Davis housing market.

After releasing the draft of the EIR, city officials opened up the planning process for public comment until Dec. 20, according to a notice from the city.

The site of the proposed University Commons project is currently home to a Starbucks, Cost Plus World Market, Fluffy Donuts and other shops and restaurants — along with the recently shuttered Forever 21 store and Grad Alligator bar. Under plans released last year by Brixmor Property Group, the current owners and developers behind the project, most of these business spaces would be demolished to build new housing and retail space. Developers, however, plan to leave the nearby Trader Joe’s intact throughout construction.

According to the EIR draft, current developer plans would add 264 units of multi-family housing to the site, with a total of 622 bedrooms and 894 beds. The planned University Commons building would be seven stories high at its tallest point, with an attached stepped-down portion of the building standing at three stories tall.

“At buildout, the redeveloped University Commons building would be seven stories and approximately 80 feet in height […] with the northeast portion along Anderson Road stepping down to three stories and 44 feet in height,” the draft EIR read.

According to the draft EIR, the new housing would be primarily oriented towards students because of its proximity to the UC Davis campus but would be available for non-student residents as well.

The draft EIR notes potentially significant impacts on air quality, greenhouse gas emissions, energy use and noise from the project. In the report’s public notice, however, city officials claimed that mitigation measures proposed in the report can reduce such impacts to “less-than significant levels.”

The project would have a negative impact on pedestrian, vehicle and bike traffic around the site though, even after proposed mitigation measures were implemented.

“The Draft EIR determined that the project would have certain impacts to Transportation and Circulation that would remain significant and unavoidable even after implementation of the feasible mitigation measures set forth in the Draft EIR,” the notice read.

It may be some time before Davis residents see these impacts, however, according to Eric Lee of the department of community development and sustainability. The University Commons project is still in review and planning stages, Lee said, and current developer plans represent more of a conceptual framework than a concrete blueprint.

“It’s going to be a while — it’s not imminent,” Lee said. “There’s a couple [of] other steps we need to go through — certainly for this current process — and some additional review that’s needed. Right now, we’ve got the Environmental Impact Report out. We’ve been processing requests and review proposals for a while now, and we finally have been able to get to this point where we have a good understanding of what the project is, what the issues are, analyzing impacts and putting together this document for public comment.”

Lee said he couldn’t speculate on when construction might begin. Last year, developers said they hoped that demolition and construction would begin in 2020, the Davis Enterprise reported, with residential and retail spaces opening in 2022.

Public comment on the draft EIR will remain open until Dec. 20, according to the City of Davis website. During this 45-day period, residents can direct their comments to Eric Lee, Planner City of Davis Department of Community Development and Sustainability, at 23 Russell Boulevard Davis, CA 95616 or at elee@cityofdavis.org.

There will also be a public meeting hosted by the Davis Planning commission, tentatively scheduled for Dec.11, at 7:00 p.m. at the City of Davis Community Chambers at 23 Russell Boulevard, Davis, CA, 95616. During the meeting, the Commission will solicit input and comments on the project from public agencies and members of the general population.