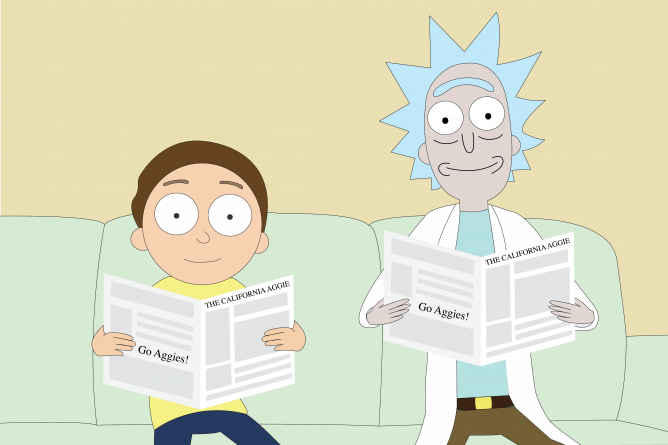 After restlessly waiting for two years, fans are finally able to watch season four of Cartoon Network’s Adult Swim “Rick and Morty.” Creators Justin Roiland and Dan Harmon have created such an iconic show that the wait has been well worth it.

This adult animated show occurs in alternate dimensions and planets, but that is the only constant viewers can expect. From there, eccentric grandfather scientist Rick and grandson Morty’s decisions are unpredictable, allowing for endless possibilities.

There will be 10 episodes in season four, but the second half will not air until after New Year’s, in 2020. As for the first couple of episodes that have been released this month, they have yet to disappoint.

The first episode, “Edge of Tomorty: Rick Die Rickpeat,” starts off with an adventure that escalates when Morty becomes obsessed with a death crystal that guides all of his decisions. His obsession leads to Rick gruesomely dying and being cloned in various dimensions.

In this whirlwind episode, Morty can’t let go of the possibility of growing old together with Jessica, and Rick is continuously cloned into different fascist dimensions. Morty’s willingness to engage in combat against the U.S. Army is comical in its absurdity, and his decisions lead to crazier situations.

The complex storylines are unpredictable, and the dark humor can make some scenes difficult to laugh at, but the unapologetic tone Rick has toward everything makes what he says amusing.

In this episode, once Rick reaches a dimension of wasps, he lets his guard down. This scene is a great mesh of dark humor when the wasp version of Rick’s family are all together eating dinner, along with a live caterpillar with the face of Morty’s math teacher, Mr. Goldenfold.

Rick and Morty’s humor is controversial at times (it is Adult Swim, afterall), but there are tender moments where Rick imparts useful wisdom unto Morty.

They regroup at the end of the episode and break the fourth wall, hinting at continuing their adventures for a hundred more years (or episodes), which is in line with the fact that Cartoon Network had already ordered an unprecedented 70 episodes after season two.

This episode did not disappoint because the creators stick to what works. The show’s quick pace keeps each episode moving along. The small details of their voices being high pitched, Rick constantly belching, Morty’s stuttering, censored curse words and moments of meta commentary all make for binge-worthy television.