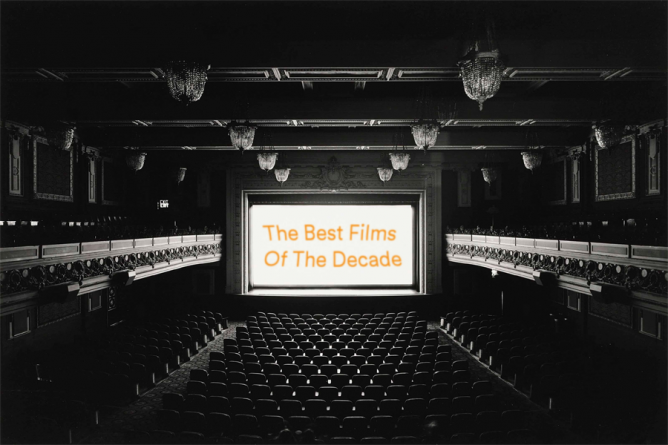 2010: “Exit Through The Gift Shop” directed by Banksy

Forget about your edgy cousin who got really into street art for a second and take in what was the most peculiar, fascinating piece of cinema of 2010. Directed by the enigmatic Banksy, “Exit Through the Gift Shop” is a documentary, or at the very least, something that claims to be one. The subject matter is interesting — seeing actual aficionados create, install and spray under the cover of night — but the true beauty of the film comes in a slow realization while viewing. Just maybe, this isn’t a documentary at all, but instead a cinematic fabrication created by Banksy himself, with our cameraman, Thierry Guetta, as a simple actor with a made up backstory. Holding up a mirror to those interested in the world of street art, Banksy shows us just how foolish we might really look.

If loud thumping synths, glaring neon and the sweet silk of Ryan Gosling’s scorpion jacket doesn’t get you feverishly excited for a movie, I don’t know what will. The intense, sometimes gratuitous, action scenes are backed by such an energetic score that it feels as if “Drive” reached out, grabbed you by the collar and threw you into its world of booming bass and flashing lights. This is a high-energy thrill ride that is not for the faint of heart — one that explores a love-turned-revenge story just as much as it depicts a stylistic romp through a neon-laden Los Angeles.

It only makes sense that this tale about an ex-Soviet romantic with a penchant for the past would deeply appeal to me. Loosely — and I mean very loosely — based on Leo Tolstoy’s novel of the same name, “Anna Karenina” is a decadent film all about the drama surrounding our titular heroine and the aristocratic world she inhabits. It is a sort of “Real Housewives of Atlanta,” except the housewives live in Rococo-inspired chateaus while their husbands hunt with muskets for wild boar. This film probably takes the prize for best set and costume design of the decade, if not the century, so far — 1870s Russia has never looked so good, and Count Vronsky is a personal style icon. Go see this film if, for nothing else, just to remind you just how pretty cinema can look.

Boy meets girl. Girl turns out to be artificial intelligence within a smartphone simultaneously dating thousands upon thousands of others. It’s just one of those classic love stories you always hear about. And at this point, I’m worried it’s going to happen to me.

“Who wouldn’t want to be a lobby boy at the Grand Budapest?” This line, uttered by protagonist Zero within the opening moments of the titular film, eloquently explains the way I feel Anderson once again transports the viewer so deftly and masterfully into his world of pastels and pastiche. Filled with his trademark humor, color palettes and reverence for symmetry, we see this Eastern European inspired whodunit as Anderson at full force, with wonderful performances from every cast member — a rare feat. This is a world I want to live in, with characters I want to meet. Wes, my people will reach out to your people. Maybe I can get a role as an extra. Until then, I’ll keep watching “Grand Budapest Hotel” on a monthly basis.

2015: “The Lobster” directed by Yorgos Lanthimos

The often surreal, strangely harrowing and constantly captivating tale that is “The Lobster” could be described in one word: absurd. It could also be described as breathtakingly beautiful, with disturbing moments peppered throughout. Lanthimos takes this story of dystopian love, with all its strange rituals and gestures, and creates a surprisingly heartwarming film. It shines a light on the sacrifices we make, both external and internal, to love someone. A master of both color and shot framing, watching “The Lobster” is akin to observing master painter with brush, each stroke more beautiful than the last.

For all the arthouse flicks, foreign dramas and Mumblecore indies I seem to enjoy, it is often nice to simply kick back and watch a movie. And in 2016, this was something that seemed exceptionally challenging to do. “The Nice Guys,” a story about two private eyes in 1970s Los Angeles, however, did just that. I had never been so invested in a film that doesn’t take itself seriously. I don’t usually have to pause a movie because I’m laughing so much, but this movie got me there. Ryan Gosling and Russell Crowe are a match made in heaven, the plot is surprisingly complex, with performances by women, from the villain to Gosling’s daughter, anchoring down “Nice Guys” as an unlikely classic. If you’re looking for a film that will take your expectations and blow them out of the water, this is it.

2017: “Call Me By Your Name” directed by Luca Guadagnino

Sometimes the most subtle of gestures mean the most. In a cinematic sense, “Call Me By Your Name” embodies this more than any film I’ve ever seen. Soft, yet deeply mesmerizing, Guadagnino’s adaption of the novel of the same name captures what it means to be young and in love. It is confusion, it is melancholy, and at the same time, it is unforgettable moments and it is pure joy. With classical sonatas juxtaposed against 80s synth-pop hits, along with the beauty of a small town in Italy, “Call Me By Your Name” takes you by the hand and never lets go. And just like the fleeting love it depicts so stunningly on screen, one wishes this film was not two hours, but instead, endless.

The unraveling of a cinematic genius has never been more compelling, beautifully shot and masterfully acted than it is here, set against the backdrop of the May Revolutions in France. “Godard Mon Amour” is based on Anne Weizemsky’s account of her marriage to the titular director, one that was filled with contempt and alienation, stemming from Godard’s obsession to depict authenticity on film. Yet, there is a tenderness shown, depicting both the beautiful peaks and destructive valleys of their relationship. Godard Mon Amour utilizes this energy and packs it into simple yet hypnotic cinematography, with some shots that will floor you with how uncomplicated yet graceful they are.

2019: “The Lighthouse” directed by Robert Eggers

Robert Eggers’ self-described “weird tale”  is a revelation not only for the horror genre, but for independent filmmaking as a whole. Stick to your vision, and you may just strike a mound of gold. In this case, that vision is a murky, black-and-white exploration into two lighthouse keepers and their descent into madness on the high seas. Equal parts Greek Tragedy, surrealist painting and New England folk myth, “The Lighthouse” is the work of a newly minted auteur —one who is taking his first steps into greatness.