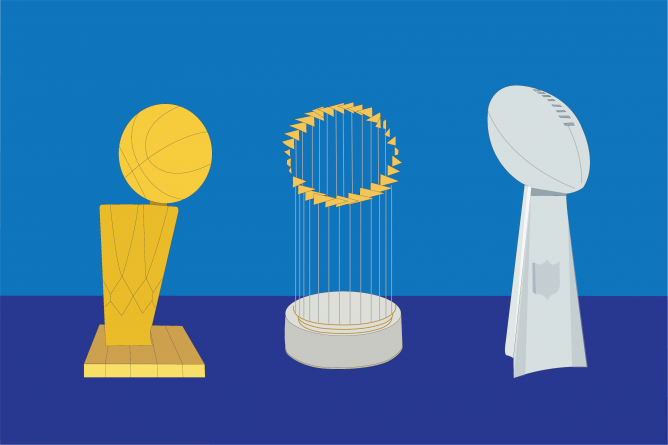 Examining the rarity of dynasties in sports, why they almost never last

Dynasties. They are rare but also crucial to any timeline in sports history, as they are forever admired or hated depending on what team you are a fan of. There are dynasties in every major sports league, but by far the most prominent in American sports lore come from the National Football League, the National Basketball Association and Major League Baseball. Some have developed out of pure luck and, for others, it is simply about having the right people at the right time. There are many factors that have much to do with how dynasties form and how long they last. Whatever the case may be, many people say that the hardest thing to do in sports is to win it all — and harder still is to continuously win over a long period of time.

In terms of the NBA, it can be said that this is the league with the “easiest” pathway to create a dynasty. Whether it is the 1960s Celtics, the 1980s Lakers, 1990s Bulls, the Spurs under Gregg Popovich or even the 2010s Warriors, there are a ton of examples of dynasties in nearly all of the past seven decades. The foundation for all these teams was drafting great players in the early rounds or selecting others later in the draft that went over the heads of other teams at the time. On top of this, an NBA dynasty typically has the fortune of having its key players hitting their prime at about the same time.

Even after the introduction of the salary cap in 1985, the NBA has developed ways for teams to go over the cap, so, in general, money does not seem to be the problem for teams in terms of building a competitive roster. There comes a time for every team when important role players have to depart and get paid elsewhere, but they are oftentimes interchangeable when placed alongside great players that can elevate everyone’s play.

So, what’s the problem then? It seems like in the NBA, it is not a problem to pay these players as well as keep solid teammates around them. But, as is in life, many things are unexpected. And when it comes to basketball, problems can arise from many areas.

With only 13 active players on a roster, relationships between NBA teammates are important because the cohesiveness and trust of the group is often the key difference between winning or losing. What happens with a lot of successful NBA teams is that the daily grind of the 82-game season and the load of playoff runs can cause exhaustion and strain the relationships in the locker room. The L.A. Lakers won three straight championships between 2000 and 2002, even with superstars Kobe Bryant and Shaquille O’Neal fighting. By the time they reached their fourth finals together in 2004, they were burnt out. They lost in five games to the Detroit Pistons, and the dynasty was broken up. Internal conflict is something that can linger within a team and in a locker room full of athletes with big egos — and in some cases it can be their downfall.

But the most common reasons why most dynasties end after a run of multiple years is simply age and injuries. As the NBA becomes more skilled and a team’s players get older, there is going to come a time when the rest of the league will catch up, causing franchises with older rosters to start from scratch once again. With age comes injuries, and an injury to one superstar or important piece can deter everything and expose the depth of a once championship contender — as in the 2019 NBA Finals with Golden State.

The underlying point with NBA dynasties is that in a league with so much flexibility, drafting well and being lucky enough to have a couple of things go your way can bring you championships for multiple years.

Major League Baseball is the league that stands out the most when it comes to a variety of recent winners, as the past seven World Series champions have all been different. Creating a dynasty in baseball is one of the hardest jobs to do, especially for small-market teams that are based in media markets that pale in comparison to other major markets.

More media spotlight and fan attention equals more money, and in a league where the money a franchise has at its disposal is heavily dependant on market size, money often dictates the chances of a dynasty being formed in the first place.

But that doesn’t mean that small-market teams never win the World Series. Teams like the Kansas City Royals have gone on improbable runs and won the championship on the backs of cheap, developing young talent and heroic performances by veterans. But this success is usually short-lived, as eventually these small-market teams have to pay the star players who helped them get to the top.

The MLB has a “competitive balance tax” that punishes teams that go over that payroll. But unlike in other major leagues, there is no maximum a team can spend because all money is based on where they are. This allows big-market teams to offer more money than the small-market franchises can afford, thus ending many possible dynasties before they ever get into full swing.

The NFL is likely the most difficult league in which to build a dynasty, as you can be good for a long period of time but not win anything. Of course, the outlier in this is the New England Patriots, who year after year seem to be in Super Bowl contention. The Patriots have a system and a wealth of coaching that is unparalleled by any other franchise in modern sports history, not to mention a longevity of success that no other team can match.

With 53 players on each NFL roster and only so much money available, the common blueprint for competing in Super Bowls is to acquire the best talent you can from the draft and take advantage of rookie contracts. Putting the Patriots aside, seven of the last 10 Super Bowl Champions have been teams that consisted of many players on rookie deals.

Although the salary cap increases yearly, its bump is typically far outgained by the annual increases in the going rate of key positions. Eventually, a team is going to have to pay major contributors their fair amount, and with 52 other players left to pay on the roster, the decisions are often costly.

The quarterback will always be the first to be paid the big bucks, especially the elite ones, but the real difference-makers reside with the rest of the team. In a sport that depends so much on cohesiveness and every player on the field being on the same page, a team’s championship window is often incredibly small. This is why we see many teams perform well year in and year out, but ultimately never win it all.

Likely the most important variable that can make or break a potential dynasty across all sports is ultimately who is running the show. Having a strong front office and great leadership are the foundations of every dynasty that cannot be overlooked. While they may not have total control of what goes on in the field of play, everything that goes on off the field is often just as important. The problem with this is that the right personnel are generally hard to find and not always available. And sometimes no matter how much talent a team has, if the wrong people are steering the ship, it may never reach its desired destination.

A championship in sports is one of the hardest things to achieve, as so many factors must fall in your favor. While that may work for a special single-year run, having the luck on your side year after year is often very rare. Whether you love continued success or hate perennial frontrunners, a dynasty is something historic that every sports fan can at least appreciate when it comes around.