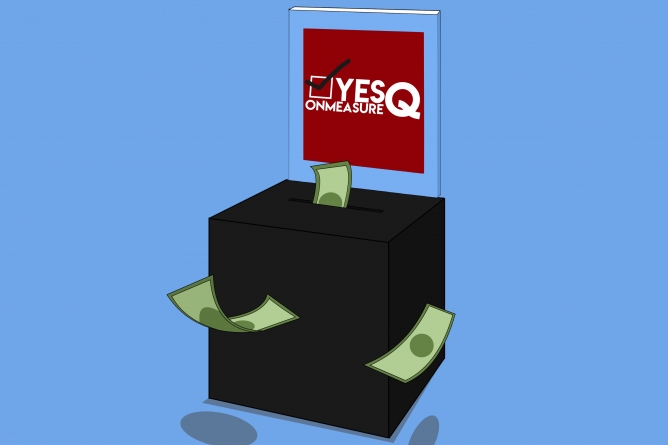 Measure Q will be on March 2020 special election ballot

Measure Q, a renewal of a 1% sales tax on goods sold within the town of Davis, is on the March 2020 ballot. On Sep. 3, the City Council of Davis unanimously passed Resolution No. 19-137, a declaration of a fiscal emergency, stating that a special election is to be held on the issue of Measure Q.

The election will be held on March 3, 2020. Measure Q requires a simple majority, or a vote of more than 50%, to pass. If it is not passed, it will expire on Dec. 31, 2020. According to City Councilmember Dan Carson, the sales tax has existed in some form for roughly 20 years. This version of the tax has been in place since 2014.

Despite the tax, Davis’ sales tax rate — which currently includes the 1% sales tax referred to in Measure Q — is in the same range as the neighboring cities at 8.25%. For comparison, Sacramento’s rate is 8.75%, West Sacramento’s is 8.25% and Woodland’s is 8.00%.

Unlike other sales taxes for the state and county, all money raised from the Measure Q sales tax is spent exclusively in Davis. Revenue from this tax makes up about 16% of the City’s total General Fund.

According to the City of Davis’ website, all nonessential goods will be subject to the tax. Any good labeled as a “Necessity of Life” — a determination made by the California Revenue and Taxation Code — is tax-exempt, including “groceries, prescriptions [and] certain medical devices.”

“The sales tax dollars have been spent on things like fire and police, parks maintenance and recreation programs — all the things that go to the different city services,” Stachowicz said.

Resolution 19-137 outlined the steps City Council would be forced to take if revenue from the tax was lost.

“Whereas, the loss of the $2.2 million […] would require the City Council to determine how to reprioritize among critical city services, reducing or cutting numerous City programs including public safety (Police and Fire); maintenance of city roads, sidewalks, bike paths and parks; and community programs,” the resolution states.

“We wouldn’t be able to maintain the quality of life we have in Davis today if we didn’t have these revenues,” Carson said. “We would be struggling with really severe deficits. And if we lose this, that’s exactly what we face down the line.”

Carson said Davis would struggle with “severe deficits” without the revenue from Measure Q. According to David Greenwald of The Davis Vanguard, however, Davis already faces a deficit.

“Our fiscal estimates are that we are short eight to ten million per year for at least the next 20 years,” Greenwald writes. “And without intervention, that number probably gets worse, not better.

“The problem is that, even if we pass this, all we are doing is securing the status quo funding level,” Greenwald continues. “This does not add any money to the general fund — it simply preserves what we have.”

Due to the necessity of the tax, Carson states that it has been met with a “very positive public outcome.” About 100 community leaders and organizations publicly support the measure so far, according to Carson.

If passed, the tax will stay in place indefinitely. There will be some taxpayer oversight through the Finance and Budget Commission, however, which is an advisory board to City Council comprised of Davis residents.