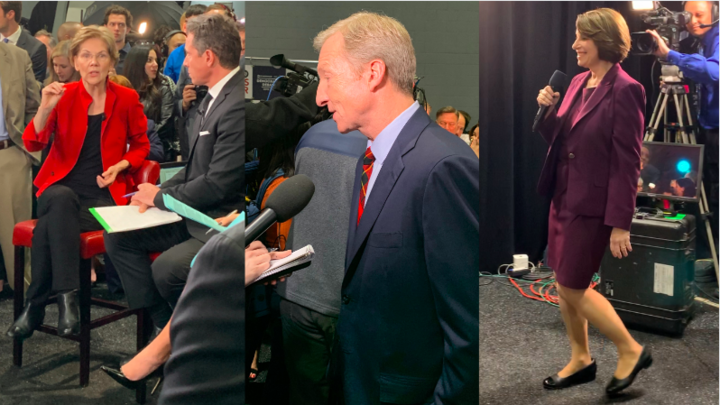 The most recent polls show Biden in the lead, with 27.8% support, followed by Sanders with 19.3%, Warren with 15.2% and Buttigieg with 8.3%. Sen. Cory Booker, Rep. Tulsi Gabbard and former Mayor Michael Bloomberg — all of whom are polling ahead of Steyer — did not qualify for this debate. In order to qualify, candidates needed to meet polling and fundraising thresholds designated by the Democratic National Committee (DNC) by Dec. 12. Booker, Gabbard and Bloomberg did not meet these thresholds.

Also present at the debate was California Governor Gavin Newsom; following the debate, The Aggie asked Newsom about his thoughts on recent discussions about the possibility of removing SAT and ACT scores from the admissions process for UC schools.

“You may have seen in some of the work we did this year in the budget that we were leaning in that direction,” Newsom said. “I think the UC will not surprise you — I think they’re poised to make a bold announcement.”

“Fewer than 5% of Americans donate to political campaigns,” Yang said. “Do you know what you need to donate to political campaigns? Disposable income. The way we fix this is we take Martin Luther King’s message of a guaranteed minimum income, a freedom dividend of $1,000 a month for all Americans. I guarantee, if we had a freedom dividend of $1,000 a month, I would not be the only candidate of color on this stage tonight.”

There has also been discussion in recent weeks over whether the lack of diversity in Iowa and New Hampshire — two of the whitest states in the country — should disqualify these states from voting first. These concerns have been chiefly voiced by Former Housing and Urban Development Secretary Julián Castro, who is polling with 1.2% support.

At last night’s event, jabs between Warren and Buttigieg over recent weeks manifested on the debate stage. Warren criticized Buttigieg for a closed-door fundraiser he held in “a wine cave full of crystals.” In response, Buttigieg said he was “literally the only person on this stage who is not a millionaire or a billionaire,” adding, “this is the problem with issuing purity tests you cannot yourself pass.”

With the Iowa Caucus and New Hampshire primary less than two months away, the debate, hosted by PBS NewsHour and Politico, was an important opportunity for candidates to reach additional voters; recent polls show that over 50% of voters have yet to decide on a top candidate for the primaries, according to Vox. An additional four debates are scheduled for January and February.

Labor disputes at UCLA and LMU

Questions relating to the two separate and ongoing labor disputes that impacted the debate were noticeably absent. The debate was originally slated to take place at UCLA, but it was relocated to LMU due to an ongoing labor dispute between the UC and the American Federation of State, County and Municipal Employees (AFSCME) 3299. AFSCME officials asked candidates to honor its boycott of UC events.

Just days before the debate took place, a labor dispute between UNITE HERE Local 11, a union representing food service workers at LMU, and the food service company Sodexo, which employs the unionized workers and is also subcontracted by LMU, raised doubts about whether the debate would indeed take place. All of the candidates said via Twitter that they would not attend the debate if it meant crossing a picket line. Two days before the event, the DNC and its chair, Tom Perez, helped secure a tentative contract agreement between the two parties, according to a DNC press release.

Perez, who addressed the crowd before the debate began, did mention the agreement he helped facilitate.

The topic of education was brought up over halfway through the debate. Warren discussed her plans to implement a two-cent wealth tax, which, according to her estimations, would result in an $800 billion investment in K-12 public schools.

Sanders also voiced support for taxing the wealthy and making all public colleges and universities tuition-free.

“What we need right now is a revolution in education,” Sanders said.

By comparison, Buttigieg’s proposed plan offers free college, or college at a discounted tuition rate, for those families making $150,000 a year or below.

Disability rights, a topic that had not previously received much airtime at prior debates, was addressed by the moderators in a question asking candidates how they would help disabled individuals become better integrated into the workforce and their local communities. Yang, who has a son with special needs, and Warren, who previously worked as a special education teacher, both gave strong responses to the question — Warren discussed plans to fully fund the Individuals with Disabilities Education Act, which provides both a free, specialized education and services to children with disabilities, and Yang again brought up the idea of instituting a freedom dividend for every American.

Yang and Sanders were the only two candidates to bring up student debt. Both Sanders and Warren have said they will cancel all or some of the currently amassed student debt.

Sanders was the first candidate to bring up climate change during the debate and repeatedly referenced the urgent need to combat climate change throughout the event. Given relatively recent scientific findings that certain parts of the U.S. will be unlivable by the year 2050 as a result of climate change, the candidates were asked whether they would support a new program that would relocate families and businesses away from areas such as Miami, Fla. and Paradise, Calif. In response, Klobuchar proposed re-entering the Paris Climate Agreement, Buttigieg proposed implementing a carbon tax and both Steyer and Sanders proposed declaring an immediate national emergency, if elected.

“Your question misses the mark — it is not an issue of relocating people in towns, the issue now is whether we save the planet for our children and our grandchildren,” Sanders said. “You’re talking about the Paris agreement, that’s fine. Ain’t enough. We have got to — and I’ve introduced legislation to do this — declare a national emergency.”

Relations between the U.S. and China were one of the only topics relating to international relations brought up during the debate. Moderators asked about ongoing protests in Hong Kong sparked over a controversial extradition bill and relating to larger demands for full democracy, as well as recent human rights abuses by China — specifically the detention of over a million Muslim Uighurs, an ethnic minority in one of China’s regions.

Steyer said the U.S. needs to do more to “push back,” but he also said we should not be the “world’s policeman” — “if we are going to treat climate as the threat that it is, we are going to have to partner with the Chinese.” Biden, on the other hand, supported a more militarized approach.

“We should be moving 60% of our sea power to that area of the world to let […] the Chinese understand that they’re not going to go any further,” Biden said. “We are going to be there to protect other folks. We […] should make sure that we begin to rebuild our alliances, which Trump has demolished, with Japan and South Korea, Australia and Indonesia. We, in fact, need to have allies who understand that we’re going to stop the Chinese from their actions.”

Yang, who has family in Hong Kong, said China is “in the process of leapfrogging” the U.S. in terms of Artificial Intelligence “because they have more data than we do and their government is subsidizing it to the tune of tens of billions of dollars.” He proposed the implementation of an international coalition to set technology standards, stating that “this is where we need to outcompete them and win.”

The recent impeachment of President Donald Trump by the House of Representatives was the subject of the first question of the night posed to all of the candidates. According to the moderators, Congressional Democrats have not yet convinced a strong majority of Americans to support impeachment.

In response, Klobuchar called recent events concerning the president a “global Watergate” and said the American people need to hear testimony from top White House officials, including Acting White House Chief of Staff Mick Mulvaney. In his response, Yang said “we have to stop being obsessed over impeachment.”

“[We need to] actually start digging in and solving the problems that got Donald Trump elected in the first place,” Yang said. “We have to take every opportunity to present a new positive vision for the country, a new way forward to help beat him in 2020 because, make no mistake, he’ll be there at the ballot box for us to defeat.”

With over 200,000 DACA recipients in the State of California alone — more than any other state — moderators asked candidates whether they would move to enforce a “permanent legislative fix for Dreamers” in their first 100 days in office.

“I believe everyone on this stage would do the right thing by Dreamers in the first 100 days,” Yang said. “I would make it a top priority. I’m the son of immigrants myself. The fact is, almost half of Fortune 500 companies were started by an immigrant or children of immigrants. Immigrants make our country stronger and more dynamic.”

Buttigieg, who previously said the U.S. owes compensation to children separated from their families at the Southern Border, also said at the debate that those children should have a “fast track to citizenship.” He also voiced support for giving reparations to the descendants of enslaved people.

All of the candidates present have committed to supporting the passage of the Equality Act, a comprehensive civil rights bill.

Moderators addressed the 22 transgender individuals killed in the U.S. this year, that officials know of, who were mostly women of color. Candidates were asked how they would stop violence against transgender people.

Warren said she promises to visit the Rose Garden once a year to read the names of transgender individuals killed in the past year — “I will make sure that we read their names so that as a nation we are forced to address the particular vulnerability on homelessness.”

“The transgender community has been marginalized in every way possible,” Warren said. “And one thing that the president of the United States can do is lift up attention, lift up their voices, lift up their lives.”

In his response, Sanders brought up his support of a Medicare-for-all, single-payer program that would provide healthcare to every person in the country regardless of sexual orientation or need.

In the final question of the night, PBS NewsHour Managing Editor Judy Woodruff asked the candidates whether they would ask for forgiveness from or give a gift to any of the other candidates. Following the responses, viewers and members of the press pointed out on social media that both of the candidates who asked for forgiveness — Klobuchar and Warren — were also the two women on the debate stage.

“We have to remember as Democrats — and if I get worked up about this, it’s because I believe it so much in my heart — that we have to bring people with us and not shut them out,” Klobuchar said. “That is the gift we can give America in this election.”

The next debate is scheduled to take place Jan. 14 in Des Moines, Iowa. So far, Biden, Warren, Sanders, Buttigieg and Klobuchar have qualified.