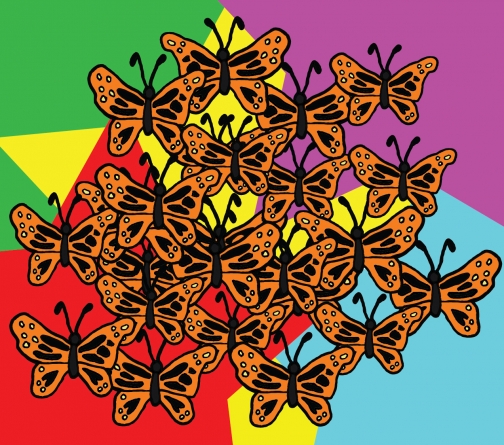 The Yolo County Resource Conservation District is planting thousands of native plants to increase the breeding and foraging habitat for the dwindling western monarch butterfly population.

The project is a joint effort between the Yolo County Resource Conservation District and the Xerces Society for Invertebrate Conservation, which sent out a Western Monarch Call to Action after western monarch butterfly populations dropped from 192,000 in 2017 to 30,000 in 2018. One of the five actions listed in the Western Monarch Call to Action is to preserve breeding and migratory habitat, much of which is located in the Sacramento Valley.

Heather Nichols, the executive director of the Yolo County Resource Conservation District (YCRCD), explained how Yolo County got involved in the statewide project led by the Xerces Society.

“The Xerces Society was able to receive funding through the Wildlife Conservation Society Climate Adaptation Fund to organize and distribute 32 monarch and pollinator habitat kits through California in strategic areas,” Nichols said. “Our RCD applied for six sites, and we were awarded four of those 32 kits.”

Each of the four kits given to the YCRCD consisted of 1,600 native and drought-resistant plants, which included narrow-leaf milkweed, showy milkweed and four types of native wildflowers — all grown at Hedgerow Farms in Winters, Calif. Alex Tremblay, the project manager at the Yolo County Resource Conservation District, described the role of milkweed as larval host plants.

“Milkweed is the primary food source for monarch caterpillars,” Tremblay said. “The caterpillars come out, start eating the milkweed, turn into a chrysalis and then they turn into a butterfly.”

“The four other plants that we’re planting are nectar sources,” Tremblay said. “Those flowers are California native wildflowers, and they were chosen so that their bloom periods would ensure that there’s always a flower for the butterflies to feed on.”

The six sites where the kits are being planted are located on roughly 15 acres throughout Yolo County, with three sites on private property and three on public land. The goal is to finish the planting by Jan. 1, 2020.

“In Yolo County, which is primarily agriculture, a lot of our habitat is along waterways and farm edges,” Nichols said. “You’re going to see a lot of these monarch habitats going in along these edges where we’re trying to boost the ecosystem function.”

The YCRCD is working with other organizations in the Yolo Creek and Community Partnership to complete the planting, including the Center for Land-Based Learning, Putah Creek Council and Point Blue Conservation Science.

One of the sites is located at North Davis Upland Habitat Area on the corner of F Street and Anderson. Tree Davis, a local nonprofit, is helping the project by bringing in community members and high school students to plant and raise awareness about the western monarch population.

Two of the sites, at Cache Creek and Putah Creek, are being incorporated into habitat restoration projects that the YCRCD is already working on. The project is a great opportunity to bring awareness for the western monarch butterflies and to bring the community together, according to Nichols.

“We are working with landowners who we know can take care of those sites and who are committed to reduced or no chemical use in those areas,” Nichols said. “The community gets to be a part of the planting, so it works on several levels of increasing our awareness and being part of the solution.”

Though habitat loss is a likely factor contributing to the decline of western monarch populations, researchers are not entirely sure exactly why their populations are declining. The Xerces Society cites “stressors such as habitat loss and degradation, pesticides, and climate change — as well as other pressures on the migratory cycle of the monarch that we still have yet to fully study or comprehend,” on its website.

There are several steps community members can take to help protect western monarchs, including exploring a website dedicated to tracking the monarch population, according to Nichols.

“Planting milkweed in your yard and reducing pesticide use are things someone can do if they have a little bit of ground,” Nichols said. “There’s a Western Monarch Milkweed Mapper that is a community science effort. If you adopt a [milkweed] plant and monitor it, you can be a citizen of science in that way.”