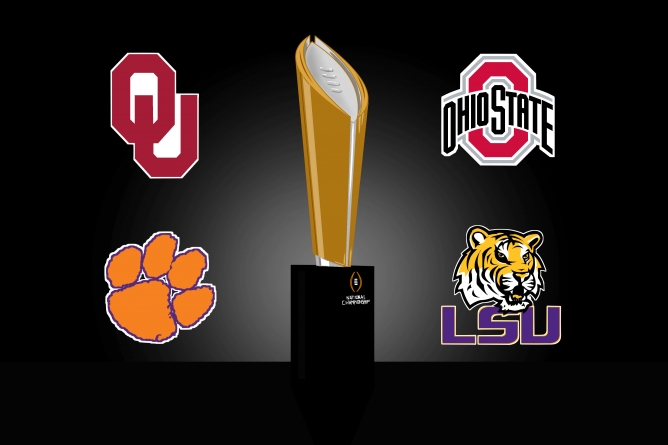 After a four-month marathon, the college football season has finally reached its closing act. Fourteen weeks of regular season action, 10 conference championship games and 40 bowl games have come and gone, producing another memorable fall for universities across America.

But the annual College Football Playoff semi-finals have not always lived up to the hype in their six-year existence, as fans have yet to enjoy a year where both playoff games are competitive. Each year the semi-finals produce either a blowout and a thriller, or two snooze fests. Fortunately, 2019 gave us the former, with top-ranked LSU demolishing Oklahoma in the Peach Bowl and Clemson slipping past Ohio State in a captivating Fiesta Bowl.

These results have set up a dream matchup in Monday’s national championship game, pitting Tigers against Tigers in what promises to be a fascinating showdown at the Superdome in New Orleans, LA.

The similarities between Clemson and LSU go far beyond their names. Both teams come into the championship game sporting undefeated records and looking to complete a rare 15-0 season, something only accomplished once in FBS history by Clemson last January.

Clemson is the more experienced team, appearing in the CFP for the fifth straight year and riding a 29-game winning streak overall. They are gunning for their third national championship in four seasons, while LSU looks to hoist the trophy for the first time since 2007.

Both teams nickname their home venues “Death Valley”, which seems appropriate considering the nightmares endured by every opponent who ventured into these hostile environments throughout the fall.

On each sideline, there will be a superstar quarterback destined for fame at the next level, regardless of what happens on Monday night. LSU’s Joe Burrow, the Heisman trophy winner, is a heavy favorite to be selected No. 1 overall in April’s NFL Draft and Trevor Lawrence is almost a lock to receive the same treatment if he departs for the pro’s as expected in 2021.

Both programs are led by vocal head coaches whose interviews and press conferences have become appointment television. LSU head coach Ed Orgeron has captured the hearts of many fans across the nation with his heavy cajun accent, signature catchphrases and Louisiana pride.

On the flip side, Dabo Swinney always brings pure honesty and passion but has now comically adopted an underdog mindset for his program this season, due to its supposed lack of credibility playing in the relatively weaker ACC conference. Swinney has often joked that his team could ill afford a single mistake because the CFP selection committee was trying to find reasons to keep them out of the final four.

This time, Swinney actually has a valid point as LSU is currently a 5.5-point favorite in most sportsbooks around the country. But Clemson has typically thrived in the underdog role, winning six of its eight postseason games in the CFP era despite being favored just twice.

Behind the scenes, there is no shortage of headliners on each team’s coaching staff. Both programs have invested heavily to acquire some of the top coordinators and assistant coaches in the sport.

LSU has the luxury of leaning on defensive coordinator Dave Aranda, the highest-paid assistant coach in the country. Additionally, the arrival of passing game coordinator Joe Brady from the New Orleans Saints completely changed the entire LSU offense, as Brady implemented a modern spread scheme that has taken full advantage of Burrow’s skillset.

Meanwhile, Clemson enjoys the services of defensive coordinator Brent Venables, the second highest-paid assistant coach and a popular name in many head coaching searches each offseason. Under his watch, the Tigers have been one of stingiest defenses on a yearly basis and continually churned out top NFL draft picks.

With a historically long 15-day gap before the championship game, both coaching staffs will have more than enough time to correct previous mistakes and craft sophisticated gameplans with some unpredictable wrinkles.

Nonetheless, it’s hard to imagine this game being a low-scoring affair or defensive slugfest. LSU has been held under 36 points only one time all season, and Clemson has scored at least 38 in all but one game since October.

Burrow has shattered numerous passing records all season long, throwing for over 5,000 yards and 55 touchdowns, making him the obvious choice for the Heisman Trophy. The Ohio native took his game to a completely new level in the 63-28 demolition of Oklahoma in the Peach Bowl, throwing for seven touchdowns in the first half.

Burrow has a litany of supremely talented weapons at his disposal, including wide receivers Ja’Marr Chase, Justin Jefferson and Terrace Marshall Jr., tight end Thaddeus Moss and running back Clyde Edwards-Helaire. The wide receiver trio have combined for over 3,600 yards and 48 touchdowns.

Defensively, LSU had its fair share of struggles for most of the season but has turned a corner as of late, surrendering only 45 points in the last three games. The unit is getting healthy at the right time and will carry over lots of confidence from the semi final performance.

After receiving the benefit of the doubt from the playoff selection committee for the second year in a row, many fans were upset at Oklahoma’s humiliating result. The reality is that the Sooners were simply the victim of an unstoppable LSU force that would have likely destroyed any one of the other playoff contenders in the same situation.

For the first time since a narrow 21-20 win over North Carolina in September, Clemson had to play a close game and overcome adversity in the 29-23 semi final triumph over Ohio State. The Tigers fell into an early 16-0 hole but were able to stay within striking distance thanks to some key defensive stops in the red zone, which forced Ohio State to settle for three field goals. After a slow start, Lawrence and the offense eventually found its groove shortly before halftime and made the Buckeyes pay on several chunk plays.

Lawrence found success outside of the pocket and utilizing his legs, rushing for career-highs with 16 carries and 107 yards. With three minutes left to play, he led a four-play, 94-yard drive to score the game-winning touchdown before the Tigers sealed the deal with a last-minute Nolan Turner interception in the end zone.

The scary part for LSU is that Clemson probably put up a B- performance by its own standards and still found a way to survive against the No. 2 team in the country. With extra time to prepare and get healthy, it is hard to see Clemson making the same mistakes again and not bringing its A-game on Monday night.

LSU has a definite home field advantage with the title game being played about 80 miles from campus. All three national championships in school history have been clinched in The Big Easy, with the previous two coming inside the Superdome.

This season feels like a fairytale story for LSU, who overcame its demons against rival Alabama, finally created a high-scoring offensive attack and returned to the pinnacle of college football. It almost feels like the Bayou Bengals are destined to finish the job in their home territory and stage an all-time celebration on Bourbon Street before Burrow and numerous teammates bolt for the NFL.

At the same time, this is the exact type of situation that Clemson has thrived in time and time again. The moment is never too big for Dabo and his team, even when the odds are stacked against them.

If the past decade is any indication, Monday’s game should be an unforgettable clash that goes right down to the wire. We’ve been blessed with so many extraordinary title games with dramatic finishes recently and this year promises to be no different.