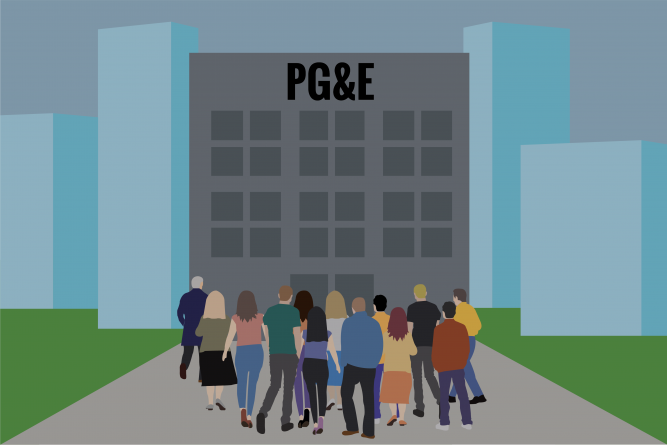 The Davis City Council voted unanimously on Dec. 17, 2019 to approve a resolution supporting the transformation of PG&E into a customer-owned utility. Resolution 2019 lists the city’s frustrations with the company.

“Californians have experienced a dystopia of alternating wildfires and blackouts that have displaced hundreds of thousands of residents, and disrupted the daily lives and livelihoods of millions more,” the resolution read.

In addition, the resolution includes a proposed solution to the perceived inefficiencies of PG&E.

“The Davis City Council […] calls for the California Public Utilities Commission and the U.S. Bankruptcy Court to fully consider a proposal to transform Pacific Gas & Electric into a customer-owned utility,” the resolution read.

The vote was made during the consent calendar portion of the City Council meeting, which consists of a list of noncontroversial matters that require no discussion and are all approved with a singular vote.

In November, Mayor Brett Lee joined a coalition of Northern California mayors supporting PG&E’s transformation from being run by investors into a customer-owned utility by signing a letter to call for change.

“Finally, the customer-owned utility structure would allow PG&E to begin the process of restoring public confidence, in part by allowing the public to have greater role in determining decisions that increasingly have come to define matters of life and death,” the letter read.

To decrease its reliance on PG&E, Davis founded Valley Clean Energy (VCE). This nonprofit is run locally and provides power to Davis, Woodland and other Yolo county residents.

“In June 2018, VCE began offering customers clean, low carbon power that we control locally,” its website read. “We’re a not-for-profit agency, and revenues are reinvested right back into our communities.”

Power generated by VCE is advertised as clean energy delivered at the same rates as PG&E. In 2018, according to the company’s website, 48% of its power was renewable and 85% was carbon-free.

Nevertheless, PG&E continues to deliver VCE-generated power through its own power lines. As of October, however, Valley Clean Energy bid $300 million to purchase PG&E’s distribution infrastructure.

“I back more competition,” Newsom said, according to VCE’s website. “I am very specifically encouraging others to come into this space and to make some bids. We want to create a competitive space — and all of it with an eye on different approaches.”

VCE expects to learn the result of the bidding after the conclusion of PG&E’s bankruptcy case. The ruling is expected to arrive in 2020.

Recently, Newsom lambasted PG&E’s plan to settle its billions of dollars of debt with victims of wildfires in a letter to the company.

“For too long, PG&E has been mismanaged, failed to make adequate investments in fire safety and fire prevention, and neglected critical infrastructure,” the letter read. “PG&E has simply violated the public trust.”

In a statement to Fox40, however, PG&E refuted claims that becoming publicly-owned would improve its service to Northern California.

“We remain firmly convinced that a government or customer takeover is not the optimal solution that will address the challenges and serve the long-run interests of all customers in the communities we serve,” the statement read.