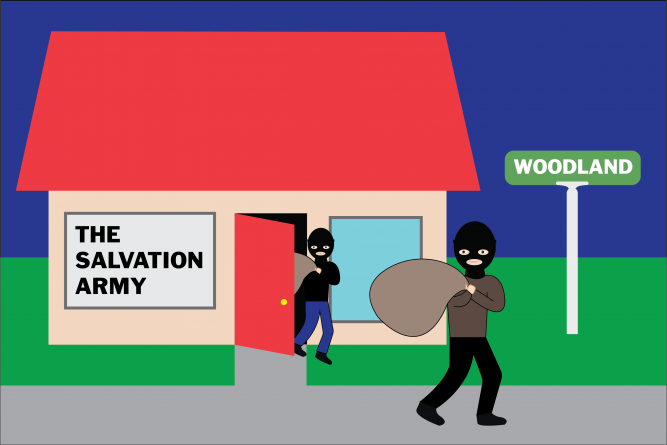 Thousands of dollars that had been raised through donations were stolen from the Salvation Army Service Center in Woodland over the holidays. The burglary occurred at 413 Main Street between late Tuesday, Dec. 24, 2019 and 12:30 on Thursday, Dec. 26, 2019, and resulted in damages to the service center of up to $1,000.

Sam Jarosz, the public relations director for the Del Oro branch of the Salvation Army said employees who were returning to work after Christmas break “found two doors that were just pretty much destroyed.”

“Upon searching the buildings more, they found that $2,413 in kettle donations — which had been raised in the two days leading up to Christmas Eve — were stolen,” Jarosz said.

According to Jarosz, the total losses added up to around $3,500, a blow to the holiday fundraising campaign and the efforts by the Woodland Salvation Army Service Center.

“The last couple days in the red kettle campaign are usually some of our biggest days,” Jarosz said. “We really push to get those donations.”

The red kettle campaign, in which volunteers stand outside businesses with a red bucket for donations and a signature bell, generally operates between Thanksgiving and Christmas. The donations collected provide a large amount of funding for community programs offered throughout the year by the Salvation Army.

This year, with Thanksgiving later in the month of November and fewer donations in general, the Salvation Army was already behind on its fundraising target before the break-in occurred.

The Salvation Army mentioned the effects of the burglary in a KCRA article, stating “although no one was injured, this is far from a victimless crime” and that “these crimes push the service center further away from its fundraising target and could mean some people in need may not be able to receive services.”

In response to the burglary, the Salvation Army set up another donations page to recover the losses. According to Jarosz, the fundraiser raised almost $9,000 in the weeks since it was created.

No suspects have been apprehended in the burglary, and the Woodland Police Department is currently investigating the incident.

Jarosz described one of the most impactful Salvation Army programs for the Northern California and Nevada regions, Camp Del Oro.

“It’s a wonderful experience to just be kids and learn about the outdoors and each other,” Jarosz said. “It’s been really helpful for children of Camp Fire survivors too.”

According to the Camp Del Oro website, donations to the Salvation Army help reduce the price of overnight camp by $32, and additional scholarships help children from low-income families afford the experience.