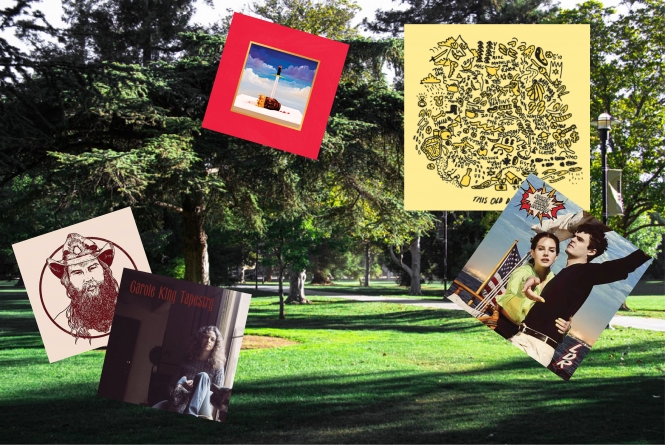 An exploration of music as community

Campus is a strange place. Don’t get me wrong, since being admitted here I have sung the praises of UC Davis to an arguably annoying amount, both in print and to friends.

There’s beauty everywhere you look, even if you have to squint sometimes. There’s not a better way to remind ourselves of who we attend school with than by looking at the albums that describe us as a campus. This is an exploration at who you’ll find in our little university, in our little slice of Cowtown, in five albums.

You already know who this is. Late to class, has a Supreme sticker on their laptop or their HydroFlask (although it is in truth probably both). They’re most likely an economics or an engineering major who feels deeply connected with hip-hop even though they are probably from a suburb of Los Angeles. This won’t take away from the fact that they will inevitably explain the ins and outs of hip-hop’s most recent magnum opus that is Kanye West’s “My Beautiful Dark Twisted Fantasy.” “It has layers,” they will say. “Did you even hear the piano on ‘Runaway?’ What about the Bon Iver feature?” “This is the greatest album of all time,” they’ll yell at you, as you patiently sip on CoHo coffee. If they don’t own a pair of Timberland 6” Tan Work Boots, you can bet they’ll spend most of their time in their 400-person lecture browsing for them. You can find this person hanging by the Quad, lost at the Death Star or anywhere that isn’t Shields Library.

Chris Stapleton – “From A Room”

They think they’re as smooth as Tennessee Whiskey, but in truth, you’ve never understood that because every time you’ve had whiskey, it’s really burned your throat and made you look like an idiot in front of everyone. These are the people in Agricultural Sciences, looking to make their bread and butter. They effortlessly pull off a flannel better than you ever will. Chris Stapleton’s “From A Room” plays softly in the background whenever they walk into a room, whether it’s to outdo you in a farming demonstration or just knock back a cold one. (And they love to knock back a cold one.) City folk just don’t get them, and we probably never will. You can find these people around the Student Farm, passing by Mrak Hall or anywhere a field of wheat is present, trying to desperately learn its secrets.

Do you smell that? It’s a mix of American Spirit Blues, mason jar quinoa and not showering after a Yosemite trip. Print is a visual medium, yet one can catch a whiff just from that description alone. There is a 99% chance they are not in STEM, but if they are, you can bet they’re there to dismantle the worker-exploitative, oppressive regime from the inside. There is also a 99% chance they believe in Communism and a 100% chance they have never talked to anyone who lived in the former Soviet Union.

With a love for old synthesizers and being emotionally unavailable, they throw on Mac DeMarco’s “This Old Dog”  to unwind from a long day of posting watercolors on their Instagram. This is all to say that “Old Dog” folks are always quite warm, albeit a little intimidating. (Their tattoos of vegetable gardens really put the pressure on you to seem interesting during casual conversation.) They throw the best parties, with people who actually dress up in theme, a rare find with the imminent collapse of Davis Greek life. Find them hanging around Cruess Hall or Turtle House and being rightfully exhausted after their CoHo shifts.

Lana Del Rey is an artist who I’m not very familiar with, but can understand the general gist of what she’s going for, just like I can gauge the general vibe of this crowd. Super into Glossier. Also super into not calling you back.

Ah, the ol’ reliable. There are days when everything can go wrong. These are the days when you need a friend, one who won’t let you down. Stern, smart and an all around warm person. Which is why “Tapestry” by Carole King is such a mainstay in their life; exuding a sort of energy you’ll never not appreciate. They’re the friend that has a really serious internship, a crazy thesis project, a super steady partner and somehow still manages to do meal prep. You are jealous, but not so much so for it to delve into envy. It’s a good vibe. They’re probably a political science major or something else important to the fabric of this country. Either way, they’re a keeper.