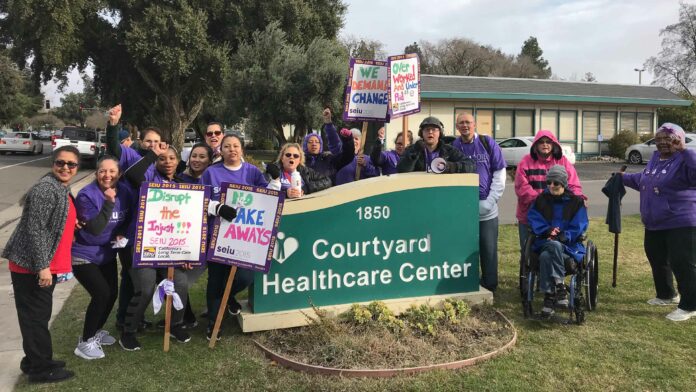 Staff members of the Courtyard Healthcare Center in Davis picketed on Friday, Jan. 17 to protest the proposed contract by their employer. The workers are represented by Service Employees International Union (SEIU) 2015, California’s union for Long Term Care Workers.

“We are on the table bargaining right now, and Courtyard is not moving,” Akognon said. “They’re not willing to give us livable wages, and they’re taking away part of the healthcare plan. We have to do this action so that we can move them on the table.”

This is the first picket carried out by the staff members. They’re returning to the bargaining table on Jan. 21, but if their demands are not met, they believe they would protest again.

According to staff member Alfa Cabiles, the majority of workers are protesting. This includes the certified nursing assistants, housekeeping and the dietary department. The nurses are not picketing, however, because they belong to a different union.

Cabiles went on to list that SEIU Local 2015 members picketed that day in five other locations as well. SEIU Local 2015 represents over 385,000 home care workers in California. Its website lists the organization’s vision statement.

“Through the work of our members, by building partnerships, and embracing innovation and education, SEIU Local 2015 long term care workers will have achieved quality jobs that deliver livable wages, retirement security, respect, and the right to a union for all,” its website reads.

Organizer Eduardo Polanco said a much larger action will take place at the Board of Supervisors meeting in Woodland on Feb. 11 at 9 a.m. He described the importance of this meeting.

“Caregivers that work in Yolo County can get better wages and better benefits as the cost of living is continuing to rise,” Polanco said.

Administration from Courtyard Healthcare Center in Davis was unavailable for contact.