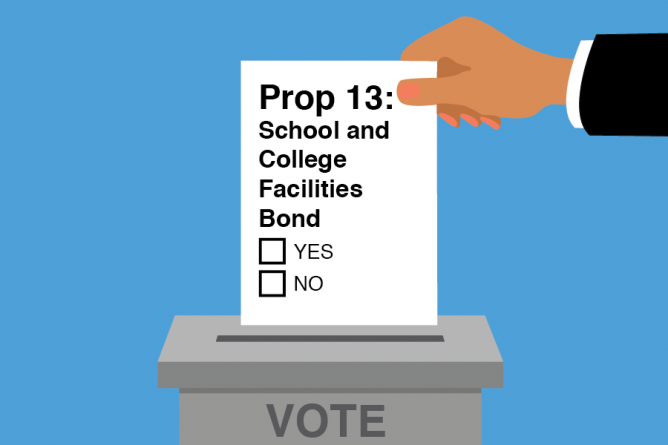 Authored by State Senator Steve Glazer and State Assemblymember Patrick O’Donnell, the bill focuses on improving seismic security, enhancing maintenance and expanding school buildings in order to better serve students. After passing both houses of the California state legislature with a two-thirds vote, the bill was signed by Gov. Gavin Newsom and went up for approval by a simple majority during the state primary.

According to the UC Office of the President (UCOP), Prop. 13 will be the first bond that supports the UC since Prop. 1D in 2006, which allocated $345 million per year in 2006-08 for similar improvements. The bond is designed to provide additional funds to the UC system in an attempt to meet the demands of increased enrollment and limited housing availability, among other issues. The UC system plans to prioritize fire safety-related projects, as well as address “seismic deficiencies” and maintenance issues.

“The university administration has identified more than $11.8 billion in unfunded capital needs across the 10 campuses, especially due to the fact that more than half of all UC space is more than 30 years old,” the UCOP press release read. The release states that this, as well as an enrollment increase of roughly 10,000 students during the last few years, has caused campuses to face significant physical constraints.

With many students struggling to find homes in the midst of the statewide housing crisis, the allocations for CSU and the UC are contingent upon systems conducting studies that examine housing affordability and availability both on and off-campus, according to Ed Source.

If passed, Prop. 13 will mandate that the UC develop a five-year affordable housing plan, which could have a profound impact on UC students. The UC will be eligible to receive money from the 2020 University Capital Outlay Bay Fund — pursuant to Prop. 13 — if it complies with these requirements.

Sarah McBride, a media and communications strategist for UCOP, said in an email that the UC is “on track to exceed its goal of having 20,000 student housing beds by fall 2020.” Additionally, the UC hopes to add 15,000 more beds between 2021 and 2025. McBride added that all UC housing is “below market rate.”

She highlighted these accomplishments as evidence of the success of the Student Housing Initiative put forth by UC President Janet Napolitano in January 2016. The initiative outlined plans to “expand the pool of student housing over the next four years” and “to keep housing as affordable as possible for UC students,” goals which continue to be reflected as the UC seeks to house more students.