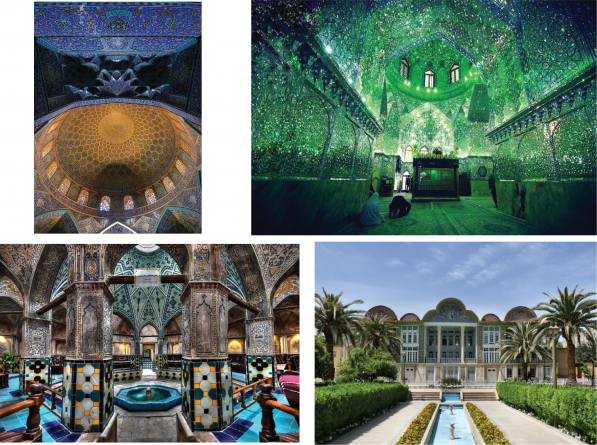 Between 2017 and 2019, ISIS destroyed the remains of the ancient city of Palmyra, located in modern day Iraq, Syria and parts of Libya. What once housed centuries-old structures, columns and temples turned to rubble. Such acts of cultural destruction were strategic: to destroy the existence of a civilization that lived before and in contradiction to the Islamic State.

In a series of tweets on Jan. 4, following the killing of Iranian General Qassem Soleimani, Trump threatened to destroy 52 targeted Iranian cultural sites if the U.S. was met with retaliation. Although Secretary of Defense Mark Esper said such actions would not be carried out, as they are war crimes, condemnation of the president’s proposal has nonetheless ensued.

“In human history, humans have often destroyed each other’s gods or cultural property or looted the palaces of defeated rulers and so on,” said Dr. Heghnar Watenpaugh, a professor of art, art history and urban history of the Middle East. “It is important to think about what these things mean because they tell us that people understood images to have power. And so how do we neutralize the power of our enemies’ gods? Certain kinds of destruction of images can be understood in this way.”

After World War II, when Nazi Germany destroyed personal and public Jewish cultural artifacts as part of their attempt to fully rid the globe of evidence of Jewish existence, the U.S. emerged as a champion of cultural preservation. The Monuments Men, a “special military unit to safeguard monuments,” were created with this agenda in mind.

“We’re at that point where there’s discussion that maybe it’s more important to preserve culture than to win this particular battle,” Watenpaugh said. “After the second World War, there was a whole series of international agreements and legal instruments that were created by individual states but also through international agreement between states that all point to the fact that the international community believes that culture and cultural heritage sites are a special category. And because they are the heritage of all of humanity, not just the country in which they are from.”

One of these international agreements includes the United Nations Educational, Scientific and Cultural Organization’s World Heritage List (UNESCO). This list will “eventually contain all the significant cultural achievements of humanity from distant periods of human history,” according to Watenpaugh. There are internationally-supported protections and preservation plans to maintain the future well-being and posterity of sites inscribed on the list.

Despite the formal international and political consensus that these sites must be protected, it begs the question: Why should the layman care for distant sites and cultures that may not be of their own descent? Watenpaugh cites the World Heritage concept to debunk that perspective.

“The idea of World Heritage is that all of the cultural expressions of humanity, throughout its history, are an important part of the history and inheritance of all of us,” Watenpaugh said. “They don’t simply belong to us, but they have to be preserved for future generations. So even if we have no idea that the Buddhas of Bamiyan exist or we’re never going to visit them, they nonetheless are part of our inherent cultural inheritance. If they are, for whatever reason — earthquake or worse — destroyed, we are deprived of something whether we were aware of it or not.”

This ideology views all items of cultural existence as evidence of human existence and human advancement. To Dr. Ali Anooshahr, a professor of Middle East and South Asia studies, the 2019 burning of the Notre Dame — which received international emotional outcry — serves as another primary example of this concept.

“When the roof of the Notre Dame burnt down, it wasn’t just French people who were sad,” Anooshahr said. “People in all sorts of places felt connected to the destruction. I think their reactions reveal how people feel about [these sites] not just as the property of a state (France) or even the property of the present custodian (Macron, who’s the head of the French government) but, in fact, as part of a broader heritage.”

Despite the emotional response to the burning of Notre Dame, some may not feel the same emotional response to other less famous structures, with less media attention and commonality in everyday culture. To Anooshahr, the prevalence of the contemporary nation-state model may weaken the popular distribution of a world heritage perspective.

“Obviously, there are places that we cannot see, we don’t always have immediate plans of accessing these sites and there are people who will never be able to visit them. But it’s not just about complete access,” Anooshahr said. “We’re used to thinking within the nation-state model. And in the nation-state model, we disregard humanity as a single being, with a common set of aspirations and achievements that thrives with culture, peace and education. So to think that human achievement in a certain place is irrelevant to me as long as I can’t see it, then I think that misses the point.”

Cultural sites, according to Anooshahr, are the embodiment of changing empires — in the same geographic space, vastly different states have risen and fallen over dense periods of history. The fact these physical structures have survived for centuries is a testament of human accomplishment to preserve its evidence of existence.

“Cultural sites, while they’re ever changing, they are absorbing information and experience every single day,” said Grace Landon, a graduate student of art history. “When you destroy that, it can’t come back. All that history can’t be rebuilt. When they’re gone, they’re gone. There’s a reason it’s a war crime.”

Although the specific 52 cultural sites that Trump targeted were not specified, Iran is “home to one of the world’s most storied ancient civilizations, has 22 cultural sites designated on the World Heritage List by UNESCO,” “including the ruins of Persepolis, the capital of the Achaemenid Empire later conquered by Alexander the Great. Others include Tchogha Zanbil, the remnants of the holy city of the Kingdom of Elam, and a series of Persian gardens that have their roots in the times of Cyrus the Great,” according to The New York Times.

Persepolis was one of the first Universalist empires, said Anooshahr. Rather than enslaving the people of conquered nations, it attempted to assimilate them into the new empire. Destruction of these sites would mean losing physical evidence of such governmental and intellectual advancements.

Beyond the fact that historical evidence would have been lost in the proposed and purposeful destruction, great concern is rooted in that these threats of a war crime come from a president of an organized state.

“In the last five or six years, we have seen intentional destruction of cultural heritage carried out by groups like ISIS,” Watenpaugh said. “We’ve seen it carried out during the civil war in Libya, in Mali, by people that we identify as terrorists, and we don’t think of them as good people that should be imitated. And so it is very shocking to see the President of the country that created the Monuments Men, and that has contributed so much to the idea of protection of cultural heritage.”

For Landon, although these tweets have not altered her already negative view of President Trump, it reminds her of a deep ideological change in America.

“What America once was, we are so far from today,” Landon said. “We’re moving away from what I think are the essential values of what we should be.”

What Trump may have considered a war-time strategy is a crime with repercussions more detrimental and sinister than possibly realized.

“The state is supposed to be the custodian of cultural sites, so I assume that the thinking is the destruction of culture somehow delegitimizes the state as incapable of protecting them,” Anooshahr said. “But it doesn’t really work politically, it actually causes people to rally. It causes pain and anger among people, and it causes them to rally behind the state that they would not otherwise rally behind as in an emergency. It’s not just the state that suffers. People in the country suffer because it causes humiliation, pain.”