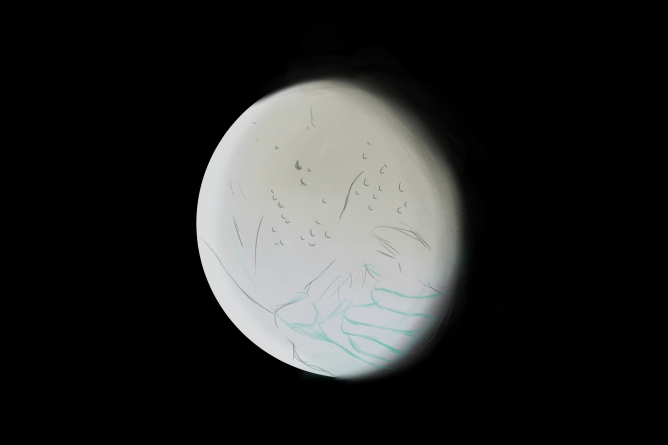 A tiny, frozen ocean world. Enceladus, the six largest of Saturn’s 62 confirmed moons, reaches only 310 miles in diameter, which, for reference, is about the size of the United Kingdom. An ice shell about eight miles in width covers the 20-mile deep ocean at its surface, which underneath contains a rocky core. Four straight, parallel fissures or “tiger stripes” cut across the moon’s south pole, with a constant flow of ocean water erupting out of the surface.

The geological features of this icy moon lacked much understanding until three colleagues attempted to study it. Max Rudolph, an assistant professor of earth and planetary sciences at UC Davis; Douglas Hemingway, a planetary scientist at the Carnegie Institution for Science, Washington D.C.; and Michael Manga, a professor and department chair of earth and planetary sciences at UC Berkeley, began their research a decade ago to understand the interesting geological processes at play on Enceladus.

The main questions they investigated included: Why these eruptions were occurring; why they were occurring in the south pole; why the fissures would break the ice but not freeze shut; why additional parallel cracks, around 21.75 miles apart, were occurring and why these processes have not been seen elsewhere in the solar system, Manga said.

“This has puzzled the astronomy and planetary science community,” Rudolph said. “There are a number of peculiar things about the fissures.”

After examining photographs, observing through telescopes, constructing physics-based computer models and computing differential equations, the colleagues believe they now know why these fissures are erupting.

The eruptions occur due to ocean water freezing, expanding and becoming more pressurized. Water is pushed up from the ocean, erupting out of the ice, which creates the first crack. When the water reaches the surface and hits the low-pressure existing in the vacuum of space, it spontaneously boils, creating the eruption, Hemingway said.

The ice is thinnest at the poles, which explains why the cracks form in the south pole, however, they were equally likely to happen at the north pole, Manga said. Jupiter raises tides in the ocean, which create heat and friction that are strongest at the poles, making the ice thinner.

The same tidal forces explain why the cracks do not freeze shut, even though the surface temperature of Enceladus is very cold, at 200 degrees Celsius. The main fissure continuously opens and closes as water from the ocean sloshes up and down it, making it thinner and hotter, Manga said.

Once the first crack formed, the built-up pressure from the freezing ocean released, so it did not create the other cracks. When the eruption from the main crack occurs, most of the materials go back onto the moon’s surface. The weight of the snow landing on the surface causes the ice to bend and, when the stress is great enough, another crack forms, Manga said. Each fissure is exactly 21.75 miles apart because that is where the stress is greatest.

“It turned out that by very reasonable assumptions about the ice shell, 35 km [21.75 miles] is a very natural number to get,” Hemingway said.

Finally, these fissures have only been seen on Enceladus because of certain necessary conditions present. Enceladus is small and has weak gravity, so the compressing stresses are slight and the cracks can penetrate deep down, all the way to the ocean, Hemingway said. The combination of the bending stresses from the fissure ripping open and the weight of the ice holding it shut allows the crack to occur and stay open.

“The most interesting part of the paper, which we were not actually looking for, was why it only happens on Enceladus,” Hemingway said. “On bigger bodies of moons, the gravity is much stronger, like 10 times stronger, and when they start initiating a fracture, the overburden pressure of the weight of ice will hold it shut and not be able to open it.”

Even though Enceladus was first discovered in 1789, this icy moon was not understood until recently. In the 1980s, the National Aeronautics and Space Administration’s (NASA) Voyager 1 and Voyager 2 space crafts passed by the moon and took its first close-up pictures. These images drew few conclusions about the moon, only showing that the terrain was fairly reflective and geologically youthful, according to NASA.

More specific details about the moon were discovered in 2006, when NASA’s Cassini spacecraft started many flybys of it while orbiting Saturn. Cameras and instruments on the spacecraft took photographs of Enceladus, providing data and evidence to confirm the presence of an ocean and that the eruptions reach through the ice to this ocean, according to NASA.

“Cassini took beautiful photographs of what the surface looks like and the eruptions,” Manga said. “It also keeps track of where the spacecraft is and figures out the gravity. Knowing the gravity plus topography and elevation on the surface, we could figure out how thick the ice shell is.”

The explanation for Enceladus’ first crack was initially thought of around 10 years ago, and Rudolph, Hemingway and Manga hoped to use this idea to address their further questions, such as with the eruptions, Hemingway said.

The geological activity of the moon surprises many researchers because of its small size and old age at one billion years, Manga said. The icy surface, however, is younger, explaining the eruptions that spew icy particles into space.

Rudolph, Hemingway and Manga’s work took about a decade of collaboration, Manga said. Answering all of their questions required piecing together a lot of different bits of information.

“We had terrible intuition,” Manga said. “We had other ideas about what would put a load on the surface. We always thought it was happening underground, and all the weight from the snow could be doing this. It took a long time to get there to figure it out.”

Rudolph, Hemingway and Manga’s work was published on Dec. 9, 2019 in “Nature Astronomy” and was presented at the fall meeting of the American Geophysical Union in San Francisco on Dec. 10, 2019.

Next, Manga and Rudolph plan to look closer at the assumptions they made in their research. When solving the differential equations, many simplified assumptions had to be made. Manga said he wants to write a thorough and careful proposal to relax some of the assumptions that have not been taken into account yet.

“We are trying to understand more of the details associated with these processes,” Rudolph said. “We presented a first-order model, but from the simplicity of the models, we want to add complexities and understand each step.”

Understanding ocean worlds like Enceladus is important because they help astrobiologists understand the evolution of these moons and whether they might be habitable and sustain life. Moons like Enceladus could uncover information about the context and origin of other lifeforms, Manga said.

“It is a great place for life to persist if there is life inside the ocean,” Manga said.

Their work studying Enceladus was funded by NASA, the National Science Foundation and the Collaborative Institute for Dynamic Earth Research.

“This research is motivated by our innate curiosity as humans about the diversity of planetary bodies in our solar system and beyond,” Rudolph said.