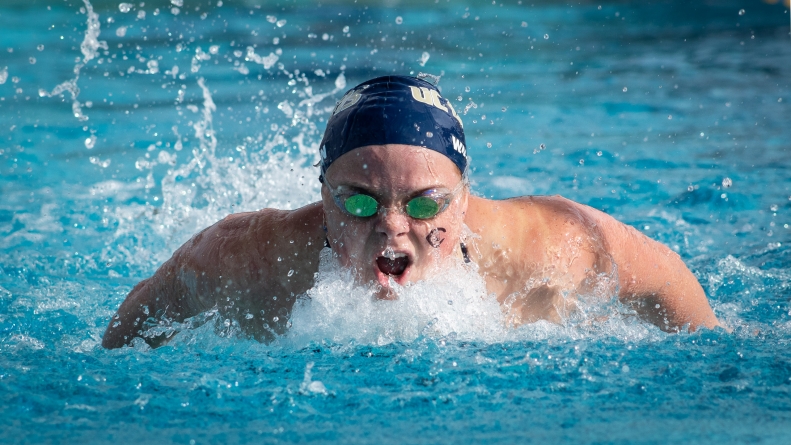 Photo Credits: Quinn Spooner / Aggie. The UC Davis Women's Swimming and Diving team wins its first meet of the season at Shaal Aquatics Center against Fresno State with a final score of 172-128.

Saturday afternoon marked the last time this season that the UC Davis Swim and Dive team would be competing at Schaal Aquatic Center, and the final home meet for the team’s seniors. Seven seniors were honored, and in total the student-athletes have collectively accrued a number of Mountain Pacific Sports Federation All-Academic honors and hold team-best times in eight events this season.

UC Davis went into this match as an underdog seeking its first head-to-head win of the season versus a Bulldogs side that was 4-1. But since reinstating their swim and dive program in 2008, Fresno State has yet to win a game against the Aggies, a streak head coach Barbara Jahn was looking to extend.

“We have this rivalry — well maybe the coaches do,” said Jahn. “Coach [Jeanne] Fleck in her tenure as the Fresno State has never beaten UC Davis, home or away. It was nice to preserve that tradition. The seniors really stepped up and I was proud of them.”

The team started off the meet on the right foot, winning the initial race — the 200 yard medley — relay behind freshmen Ashleen O’Brien and Jay Jay Eaton, and seniors Mia Facey and Mia Cunnan. The squad continued to consistently stay competitive in every race, racking up points with top three finishes in all sixteen events.

The lead and direction of the meet was up in the air until the Aggies took over after the first break. After honoring the seniors and acknowledging their accomplishments and future goals, the team came back with an unmatched fire. In the ensuing event, the 100 yard freestyle, UC Davis stole the top three spots. Senior Jamie Pincin, who led the way with a 52.47 finish, was followed closely by fellow senior Olivia Smith and freshmen Anna Lee.

The team continued to place well throughout the afternoon starting with junior Kathryn Bockman, who led UC Davis with a lifetime-best finish of 10:27:20 and a second place showing in the 1000 Free. Lee, Eaton, Cunnan and Kyla Leacox all recorded first place finishes in the 200 Free, 50 Free, 100 Fly and 200 IM, respectively, to round out the individual swim events. Ultimately, it was a team of four seniors — Smith, Cunnan, Facey and Pincin — who finished first and scored 11 points for the Aggies with a first-place finish in the 400 Free Relay.

The dive team dominated both one and three meter events due to strong performances from sophomore Taylor Hornberger and freshman Sydney Wren, solidifying the UC Davis win. The final score was 172-128, which is coincidentally the identical score from when these two sides met back in November 2014. Jahn was thrilled about the win, lauding her team’s performance.

“They did what we asked them to do. We knew it was going to be a close meet — within four to six points — and the placing could switch around. In some events it did, in others we were pleasantly surprised by going 1-2-3-4 in an event. But we had a lot of season best times and that bodes well going into our conference which is in four weeks.”

Jahn continued, praising the crowd and atmosphere at Schaal that afternoon as “really good” and “supportive.” The aquatics center was electric the whole afternoon, and was certainly one of the louder, more lively home meets in recent memory.

“Our team is smart,” Jahn concluded. “I know they can face the academic challenges coming up. Our senior class last quarter averaged a 3.4 GPA. They will all be very successful young women, I have no doubt about it. We just have to stay healthy.”

Jahn and the Aggies now have their sights set on their final dual meet on Saturday in Stockton against Pacific. After that, it’s on to the MPSF championships that begin on Feb. 19.