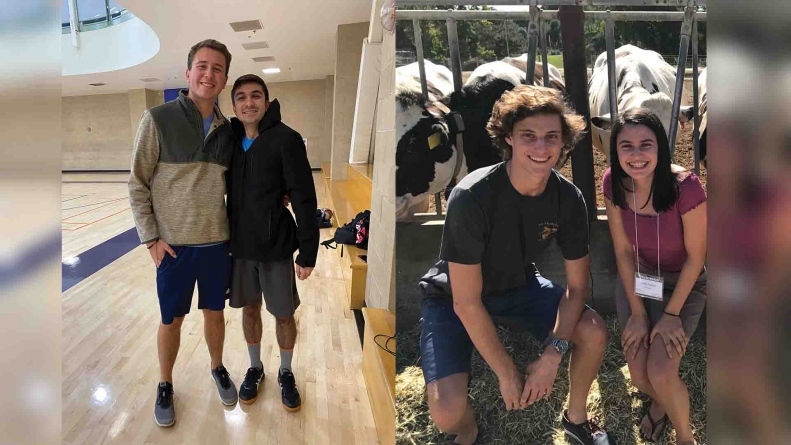 Aggies offer their own meaning of true friendship

What is the one thing you can’t live without? A good book? A loyal family dog? God forbid, your cell phone? Maybe, just maybe, an actual person popped into your head. Someone whose been there for you through thick and thin. Someone to laugh with, cry with or even someone to share in a much needed moment of silence.

Predictably, friendship is found to have a tangible and profound impact on our happiness and fulfillment. Harvard’s Second Generational Study is a 75-year-old longitudinal study used to identify the most important factors in determining long-term happiness. The study found that having strong durable relationships was the single leading indicator for boosting happiness and having a long life — even more so than diet or physical exercise.

As important as friends are to our well-being and sanity, we may seldom take time to step back and ask ourselves what makes a friend a goodie. What separates the person you nonchalantly wave to in Wellman from the person that you would do just about anything for at the drop of a hat? Three sets of friends, all students at UC Davis, shared how they knew they’ve struck friendship gold.

For Emma Roberts, a first-year neurology, biology and physiology major, being a good friend means reciprocation. Roberts stressed that effort shown on both sides works as a source of validation.

“[A good friend is] someone who is going to reciprocate the amount of effort that I put into a friendship,” Roberts said.

Roberts said showing that you respect and care about the person enough to go out of your way to make plans demonstrates that you value their time and company.

Jazmine Dahi, a fourth-year environmental science major and friend to Roberts, noted that genuine interest in conversation and your life is a mark of a quality friend.

“They make you feel valued and are willing to listen,” Dahi said. “They show genuine interest in your life and your problems.”

For Trevor Carpenter, a third-year computer science major, meaningful friendship means there needs to be a willingness to step out of your comfort zone to support and demonstrate that you care.

Carpenter also elaborated on the necessity of mutual trust, which ensures that friendships can remain stable even through conflicting opinions and heated debate.

“I have friends who have different political opinions that I don’t agree with, but as long as there is mutual respect then that is your opinion and I don’t associate it with you as a person,” Carpenter said.

To Parsa Jamshidian, a third-year statistics major and close friend to Carpenter, a critical component to building a strong connection was trust.

“Someone that you can trust — 100% trust,” Jamshidian said. “You can open up to them and know that everything you say is between you and them.”

In addition to trust, Jamshidian also highlighted humor as an excellent way to start and uphold the bond and keep things light and fun.

“Humor is huge for me, I love laughing,” Jamshidian said. “For example, Trevor is a good friend to me and I pretty much laugh at everything he says.”

Humor was the initial spark between friends Justin Prentice and Julia Cooper, both third-year political science and philosophy double majors.

“I think that [humor] helped bridge our gap because we were always really goofy when we first met and that helped us be friends, but we are very different people on many different levels and we give each other a bunch of crap,” Prentice said.

To Cooper, being a good friend means knowing them well enough to intuit when they are down and be there for them even when they don’t deliberately ask for support.

“I think [it’s about] knowing you so well that they know when you’re down and need help even if you don’t express it,” Cooper said. “Someone who believes in you and wants the best for you.”

Prentice said knowing your friends’ goals is an essential component to friendship.  He asserted that a valuable friend is motivated to support, nurture and guide you into growing and becoming the person you aspire to be.

According to Prentice, in order to execute this, a good friend has to tailor their actions to what’s best for the individual.

The comments provided demonstrate the myriad ways to add value to and maintain friendships, but all of them boil down to effort. To harken on the often used, but never overused saying: you only get back what you give out. So maybe next time you grab a cup of joe with a promising new pal or partake in some downright tom-foolery with a day one, reflect on these ideas and consider what friendship means to you.