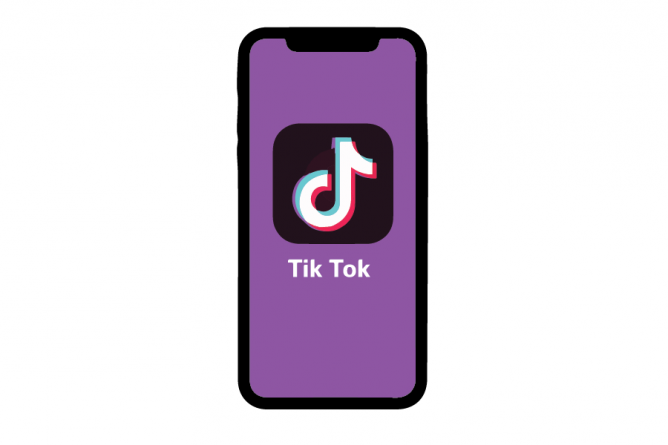 On TikTok, the stupidity of a joke or the obvious lack of effort is the punchline

TikTok is one of social media’s most recent additions that has surged in popularity over the past year. Referred to by some as Vine’s annoying younger sister, TikTok has become a go-to for content creators and teens who want to become content creators.

TikTok is unlike any other social media. The app is the product of a merger between Musical.ly and ByteDance in 2018. Talent, comedy and thirst traps coexist in the form of video, giving anyone with minor technological skills the ability to create and entertain. The minute-long videos give way for a scripted skit, a painting tutorial or, most commonly, a choreographed dance. There is still plenty of bad content to be found, but it is undeniably unique as a platform.

“I don’t really know much about it, […] I’m just doing it for fun,” said Naomi Solomon, a second-year communication major.

Katia Goldberg, a second-year wildlife, fish and conservation biology major, described TikTok as “more of a joke than other social media.”

“I would never really go to TikTok to look people up, it’s more of a comedy thing for me,” Goldberg said. “The people who take it seriously are funny as hell.”

This isn’t necessarily everyone’s perspective — college students seem to be a little bit older than the primary age demographic on TikTok. Most users are in high school, which is perhaps why the content is so amusing to adults. And with those teenagers directing their own minute-long videos for the world to see, things get risqué, fast.

“There’re a lot of girls putting this image out there and they’re 13 years old,” said Mehar Durah, a second-year cognitive science major. “A lot of creators are underage, but come off as not underage.”

Beyond some unsettling sexual content, there’s also the typical risk of young people hiding behind a screen.

“What I see on the “For You” page makes me really worried; they seem to be using it in a destructive way,” Solomon said. “There’s a lot of cyberbullying. If I was a fourteen-year-old girl, I wouldn’t want to be on there.”

Others have had a more positive experience.

“What I’ve seen is that the community of TikTok [is] supportive and complementary,” said Brock Johnson, a fourth-year communications major. “While [people on] Instagram are body shaming and wrapped up in an image conscious culture, a lot of the people on TikTok don’t fit that mold. The uniqueness of each person is celebrated on TikTok.”

TikTok can also be addicting. The screen is completely taken up by the video you’re watching, even blocking the time display on the top of your phone. The “For You” page is just a stream of what everyone is posting, creating a variety of endless entertainment.

“I’m an ex-user,” Durah said. “I had it for three weeks. I would spend a lot of time on it. It was instant gratification. I didn’t have to think because it was so much content. It’s a waste of time and it shouldn’t be a thing.”

The app has impacted some more than others. That said, TikTok seems to be making a significant cultural impact. The ability to instantly go viral from a hit video is especially appealing. There are several teenagers who are now social media moguls with brand deals galore, solely from making dancing videos. The dances are prevalent, with big-name celebrities taking a stab at the daunting moves. And even people who don’t use the app know a TikTok song or two.

“It influences Spotify top songs; a lot of them are from TikTok,” Durah said. Once a TikTok-er goes viral doing a shimmy to a catchy tune, you can expect to hear it on the radio, ever to be associated with a specific sequence of arm and body movements. Some of the popular songs include “ROXANNE” by Arizona Zervas and “Lottery (Renegade)” by K CAMP.

In fact, one of Davis’ own has experienced the fame that TikTok can bring.

“The night before I had 300 followers, and the next day [the video] had 300,000 views,” Johnson said. “The next day [my teammates and I] made another video that went viral. It’s at 7.4 million views right now. From there it took off, I got a ton of followers and really grew the account. I was lucky to hop on the trend early.”

Johnson is still reaping the benefits of this claim to fame — sort of.

“I got an email from ByteDance [the owner of TikTok], inviting me to be a part of their Super Bowl campaign,” he said. His TikTok video of dancing football players would be included in their commercial, but he had to decline the offer.

“NCAA owns our likeness, so they won’t let me,” Johnson explained. Despite the recent passage of legislation in California that will allow collegiate athletes to be compensated for their likeness, the law won’t take effect until 2023, preventing Johnson from accepting deals like the one he was offered by ByteDance.

Even so, Johnson has profited from his many millions of views. He gained around 10,000 Instagram followers after the fact, helping to promote his social media marketing coaching company.

Though it isn’t as common as other top social media apps, TikTok has made its mark. No social media is truly social media without its share of people who make it their full time job; perhaps, then, what’s made TikTok so influential is the particular type of content that’s posted.

“They seem to put in the least amount of effort and it’s hilarious,” said Tessa Leonard, a second-year environmental science and management major. “It’s sh*tty comedy.”

Although the editing features and length of the videos allow for some full-on short films, a lot of the popular content is fairly basic — the stupidity of a joke or the obvious lack of effort is the punchline. It’s almost a counterculture to the social media we’ve been raised on, where we only display the best version of ourselves online. As cringey as a self-deprecating teenager might be, at least it’s real.

“It seems a lot more homemade, it’s a less formal social media,”  Leonard said. “You don’t have to put your best self on TikTok; it’s more authentic.”