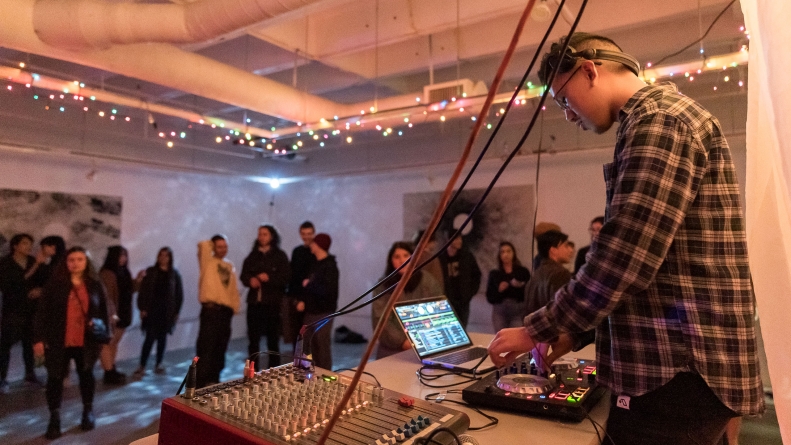 The student-organized Basement Gallery teamed up with KDVS on Jan. 16 to host a pop-up show featuring three student DJs. The show was produced by lead director and fifth-year design major Zoë Reinhardt and fourth-year art studio major Karewith Casas, who works as the director of marketing for the Gallery. Casas also had art on display at the show.

Fernandez, a third-year economics major and KDVS’ general manager, has had a passion for music for most of his life, saying he feels invigorated when he gets to connect with an audience.

“Playing music isn’t hard, but finding good music that a whole crowd will enjoy is probably the hardest thing about it,” Fernandez said. “Having people pull up Shazam during a set is a nice compliment. Honestly that’s my main inspiration: being able to play something someone has never heard before and getting them addicted to that sound.”

Calagui, who goes by the stage name DJ Miah, is a fourth-year cinema digital media and communication double major. He began experimenting with music about a year ago by making mixes and posting them online. Calagui is inspired by a variety of genres, from deephouse to techno and trance.

The performance in the Basement Gallery was Calagui’s first time performing for a crowd.

“At first I got a little nervous because I didn’t know if people were gonna like the music I played that night, but after a few transitions and seeing the crowd go wild, the night felt euphoric,” Calagui said.

Hernandez is a fourth-year sociology—organizational studies major. She works as an Events co-director and ORMF Music Festival director for KDVS. She began DJing for KDVS two years ago but only recently began performing at live events. Her music is influenced by Radiohead, De Ambassade and DJ Sama.

She was honored to be a part of the performance and is excited for DJ culture to be more popularized on campus.

“It was such a privilege to be one of the first DJs to break it in,” Hernandez said.

The Basement Gallery is located in the Art Building and regularly hosts art, music and cultural events throughout the year. Upcoming events will include an opening reception and the winter awards.