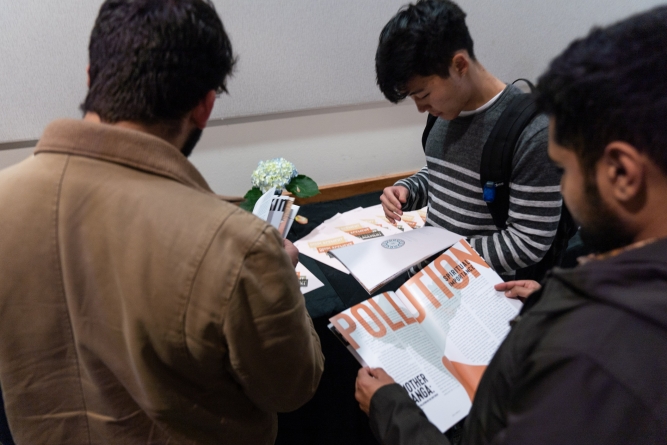 Other Collective, a student-run magazine that focuses on student voices that aren’t regularly heard in Davis publications and works, released the second issue of their magazine on Monday, Jan. 27. The publication aims to dismantle orientalist media perspectives.

This year’s issue is displacement. The Editorial Board decides each new theme and the entire staff goes through the process of finalizing which topics are fit to publish. Each issue contains a variety of article styles including personal essays and poetry, to name a few.

“This idea [for the magazine] was created as a response to a need to challenge the media’s stereotypical clumping or antagonizing of [the regions of South Asian, South West Asian and North African] cultures as a result of today’s polarized global/political climate,” said founder of the magazine Kimia Akbari, a fourth-year Middle East/South Asia Studies and psychology double major, via email. “The magazine serves to portray the diversity existing in these regions and highlight their unique voices through a creative and educational platform — especially in a small community like Davis where there is low representation of these communities.”

When the magazine was created, Akbari wanted to incorporate everyone left out in Western society. Not only do the articles represent inclusivity, but the name itself does as well.

“[The title] Other Collective evokes a beautiful feeling in itself,” said Radhika Marwaha, a third-year global disease biology major and treasurer of the organization, via email. “Literally speaking, it brings together anyone who is an ‘other.’ The thought behind creating this name was some of the forms that we end up filling as college students or just regular people do not have our ethnicities appropriately depicted, and we end up checking the ‘other’ box.”

The magazine gives students a voice and encourages readers to see the world from a different perspective. Deepa Singh, a third-year psychology major and Other Collective contributor, said her personal goal for the journal is to continue to write pieces she’s passionate about.

“I have a platform to write, I’m not an activist, but when I write I feel like I am actively making a change in the world,” Singh said via email.

Due to the limited amount of grants student publishing organizations can receive, Other Collective focuses on getting donations from on- and off-campus sponsors. They have, however, recently secured non-profit status and are on their way to earning more funding for their magazine. The funding allows them to publish more copies in-print and, hopefully, send the magazines to individuals outside of Davis, as Other Collective has gotten a few requests to do so.

“A huge help would be to provide more priority to the students who are here making a difference on the campus,” Singh said. “I wished that the campus [supported] us more.”

Writers get to choose whether they would like to find a personal piece to speak on or if they would like to use a more journalistic approach for their edition in the magazine. Either one hits home for them as they are quick to find a topic that relates to their newest issue.

“For the Displacement issue, I interviewed Kurdish-American artists and the ways in which their work challenges nation state borders and identity boundaries while addressing the fragmentation of Kurdistan, identity formation in diaspora and the weight of the devastating refugee stories of their families who fled violence and persecution in Iraqi Kurdistan,” Akbari said.

Singh’s article was about her own community, which invited readers to see a vulnerable connection with the writer and her piece.

“My piece, “Finding a Place,” is very dear to me since it speaks about the Indo-Fijian Diaspora where I speak about the history of the diaspora as well as emphasize the struggle for the current generation to formulate an identity with so many pieces of their identity lost forever,” Singh said.

The magazine isn’t just a space where readers can learn to grow as an individual, it’s also an opportunity for writers to learn more about topics that are often left out of editorial narratives.

“My piece is about an internally displaced population of women and children that came as a result of an event of ethno-religious violence against Sikhs in 1984 in India,” Marwaha said. “In a way, this issue of Other Collective allowed me to learn and research more and come to terms with the atrocities caused by this event in the country and how we can fix those in real-time.”

But displacement is a sensitive topic for some individuals, and with this latest issue, there were worries of overloading the writers.

“When I presented some sample topics under displacement that could be covered, I was afraid that I was throwing a lot of heavy content on our staff that might overwhelm them,” Marwaha said. “However, they exceeded my expectations and came up with some of the most insightful discourse by combining some topics that I had presented and doing their own research to tie in some niche topics with our theme.”

With this newest issue focusing on important subjects, the writers aim to let students know that they are valid and visible on campus.

“In my opinion, visibility and active community engagement is always a plus — it allows students to feel like they matter, their stories matter,” Marwaha said. “I also believe that being apolitical is a privilege that not everyone can enjoy today, and having a platform like Other Collective allows you to learn and create an opinion — to think and take the stance you truly believe in, whether one agrees with our stance or not!”

Other Collective is a safe place where people can say what needs to be said and inform individuals about things to which many people are oblivious.

“It provides a platform for mostly similar thinking people to be able to join together as a collective unit to fight/discuss a similar cause,” Singh said. “It’s an idealistic dream, but I hope to see a day where everyone is recognized at the table and we won’t have to create divisions to be recognized.”

The magazine is free, but supply is limited. In order to get this issue, the staff will be tabling or accepting requests via Instagram. The Other Collective aims to publish twice a year. The magazine features 10 writers for every publication, but they are always open to accepting guest submissions online through their website.