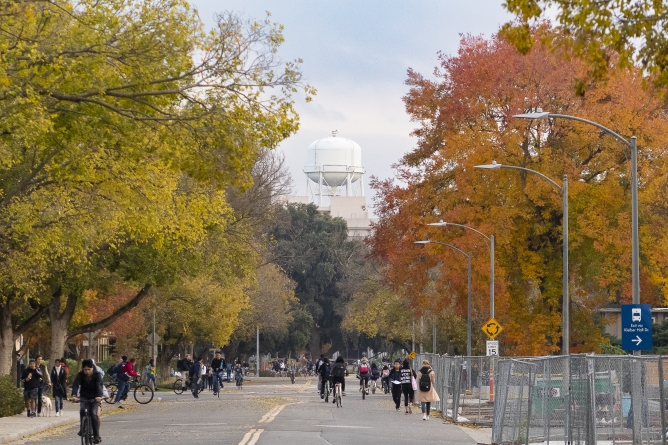 Exchange students reflect on their time at UC Davis

Whether it’s through personal experience, an information session or the occasional (or not so occasional) Instagram feed post, most students are familiar with the idea of studying abroad. But what happens when roles are flipped and studying abroad means coming to UC Davis?

While we are eating delectably crisp baguettes in Paris and tanning on the beaches of Barcelona, many international exchange students choose to uproot themselves from their own home countries to enjoy the cultural and academic opportunities offered in our very own quaint town.

They bring with them their own cultural backgrounds, strengthening the diverse network offered on campus.

Sunny Yu, a foreign exchange student from Taiwan studying economics, came to the U.S. expecting to find a college community where she could learn from an esteemed academic institution, experience a new culture and practice her English language skills.

“I chose UC Davis because I had heard that they didn’t have as many Asian students, which would force me to speak English instead of Chinese,” Yu said.

“I [am] usually hanging out with my Asian friends, and I don’t have many channels to know more English speakers,” Yu said.

Coming from a different country to interact with students from different cultural backgrounds can be a daunting task. For Yu, a combination of cultural and lingual barriers keep both parties distant.

“I want to hang out with the Americans, but there are cultural barriers,” Yu said. “Asian people like staying together while Americans are individuals who like to do things by themselves.”

Yu found that her American counterparts had drastically different social habits than her own. So instead of going outside her boundaries, she found comfort in the company of students who were of a similar background. In addition, the cultural anxiety of speaking English to native speakers deterred her and her friends from initiating conversation.

“We think it’s embarrassing, and that if we use it incorrectly they will be annoyed,”

Yu found an outlet to exercise her English through the International Pal-Program. She described the Pal-Program as an integral part of her social and learning environment.

“The one channel I do have is the pal program,” Yu said. “If you want to learn a language, they will partner you up with an American who you can talk to and hang out with weekly.”

Yu spends her downtime much like other students on campus: hanging out with friends, hiking in Yosemite and going to the occasional party. She acknowledged that California has more of a party culture than back in Taiwan and a different approach to learning.

Yu noted that the education system functions differently in the U.S. where teachers focus on hands-on, participation-based methods that include interactive discussions. Back in Taiwan, she found that the faculty left the learning to the students.

Helena Lundvall, a Swedish exchange student and sociotechnical systems major from Uppsala University, also said the teaching was more hands-on and guided at UC Davis. In Sweden, her education wasn’t guided and she was left predominantly to her own efforts and responsiveness. Teaching materials like study guides were completely foreign. She described her surprise at one of her management classes she had taken in the fall.

“For the midterm, he more or less told us what was going to be on the midterm,” Lundvall said. “This would never happen in Sweden.”

As a result, she found herself both studying and learning more while at Uppsala.

The difference in difficulty level may be partly due to some complications Lundvall had during registration at the beginning of the quarter. During registration, Lundvall did not receive any instructions on how to sign up for her classes, which prevented her from registering for highly impacted computer science courses that she needs for her major back in Sweden. This difficulty was further exacerbated due to her status as an exchange student and her zero registered units at Davis, which put her at the same late registration as the incoming first-year class. So far, she hasn’t been able to take any of the classes that she originally intended to take.

“It was frustrating because I didn’t know about pass times,” Lundvall said. “Nobody really told me. This quarter I tried to enroll again and all the classes were filled up once again.”

Lundvall also found that the structure of the education system was significantly different to that of back home. She said students traditionally take some time out between high school and college to travel, work and explore what they are interested in or might want to pursue as a career.

“For me, it’s weird that you start college straight out of high school, because back in Sweden that is very uncommon,” Lundvall said.

Sweden and the U.S. have substantial institutional differences. Lundvall, like all Swedish students, received significant support from the government in her educational and career pursuits.

Apart from the academic experience, Lundvall had nothing but praise for the UC Davis community when it came to her social experience. She found that both the faculty and her fellow students welcomed her with open arms.

“I have been so surprised by how friendly everyone here has been,” Lundvall said.

Emil Obro, an international exchange student from the Danish University Aarhus BUS majoring in economics, had similar opinions to those shared by Lundvall.

“Everyone has been helpful if I needed help with anything,” Obro said. “I really fell in love with UC Davis, which was due to great professors, wonderful co-students and amazing trips around California.”

Although these students said they were all happy with their UC Davis experience, they all pointed to specific areas for improvement — from organization to more interactive programs.

Obro specifically recommended that the university expand social events between students who have J-1 visas for studying in the U.S. like himself.

“At the international orientation, we had a day of lectures and then an ice cream mixer where we could get to know each other,” Obro said. “It would have been nice with some events other than that. It was only in the last two weeks we realized that there was actually another group of J1-visa students that we hadn’t met.”

Lundvall also gave her two cents on improvement, referencing her issues with MyUCDavis and registration at the beginning of the quarter.

“It would have been better to know how the system worked beforehand,” Lundvall said.

Yu said a further expansion of the Pal programs would be beneficial for both English learning and cultural integration for international students like herself.

“Davis should expand on the Pal programs where we can meet up weekly but talk to different kinds of people with different cultures and backgrounds,” Yu said.

The three international exchange students seemed to highly value their experience on campus thus far. For them, it offered a nice combination of small town college life, engaging academics and a chance to explore the greater California area.