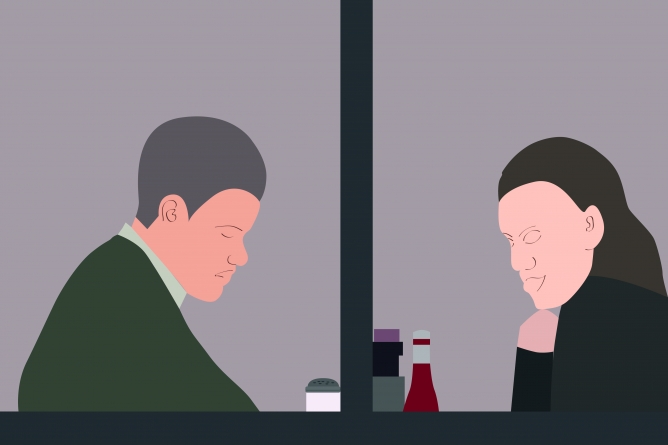 What “Margaret” teaches us about self-preservation

“Margaret, are you grieving / Over Goldengrove unleaving? / It is the blight man was born for / It is Margaret you mourn for.”

The poem also happens to be my favorite. And it was a moment of pure serendipity when, after Matthew Broderick (in the role of an English teacher) reads the poem aloud in the film, it becomes clear that the loss of adolescence in the poem parallels the loss of adolescence on screen. Both Manley Hopkins’ poem and Lonergan’s movie so precisely and honestly depict the loss of innocence as to be unrivaled by all other artistic attempts to do the same.

It is difficult to adequately summarize this film in a manner that would do justice to all of the nuanced issues it delves into. The trailer markets it as a movie about a young girl who must grapple with the fact that she has inadvertently caused a fatal bus accident. It is this, but it is also many other things as well — there’s unprotected sex; an abortion; academic cheating and adultery; drugs; the theater and the opera; a search for a cowboy hat; strained parental relationships; a lawsuit; a critique of law enforcement and the legal system; numerous intense arguments and a post-9/11 New York grappling with the unfolding consequences of a terrorist attack. Most of all, it’s all of these things at once.

A Letterboxd review put it best when describing it as “a film bursting with themes, ideas and its own sense of self-importance.”

The extended cut of this movie — the three-plus-hour-yet-undoubtedly-superior version of this film — features recurring instances of people talking over each other. On more than one occasion, we hear the conversation of an irrelevant character (sometimes they’re not even in the shot!) more clearly than we hear the film’s protagonist, Lisa Cohen (Anna Paquin). This, to me, seems a visionary decision. In effect, the viewer’s auditory experience is mirrored with

Lisa’s unstable emotional and mental state — the consequences of her actions coupled with the perils of teenage emotion crashing down on her simultaneously.

In what can only be described as a crime against humanity, the final edit of the film excludes these innovative scenes — even cutting an important moment in which Lisa very emotionally and very gently rejects the romantic advances of her friend Darren (John Gallagher Jr., a “Newsroom” legend). We barely hear her rejection. Instead, we hear unrelated gossip being exchanged between two elderly women seated at the table next to Lisa and Darren. A reviewer on Letterboxd very aptly pointed out that it is this scene, an early one in the extended cut, that informs us, the viewers, how to watch “Margaret.”

As a movie, “Margaret” drags: there’s no consistent plot narrative, it jumps from scene-to-scene (slightly less so in the extended cut) and there’s too many plots and characters for every storyline and issue to be fully resolved to satisfaction. So for me, “Margaret” is more wondrous — and more emotionally ruining — when stripped of the many confining, yet widely-accepted expectations placed upon a “movie.” It’s better experienced when thought of as a theatrical performance or an experimental film (and yes, I am aware how pretentious this sounds).

Then again, when I rewatched the film while imposing a theatrical expectation upon it, I felt as if the line “This isn’t an opera!” (a line furiously shouted at Lisa by the grief-stricken best friend of the women whose demise she’s accidentally caused), was directed at me. Lisa becomes obsessed with trying to fabricate justice from the remnants of the completely inexplicable — and truly quite graphic — bus accident she’s partially responsible for. Unsurprisingly, she fails at this because there’s no making sense of it. And aren’t I doing the same thing: manipulating a situation (or a movie) to make meaning of it for my own selfish gain?

I love “Margaret” so much because it brings up important and relevant questions about the blurred line between selfishness and self-preservation. It’s an important distinction that I feel is particularly — and almost painfully — applicable at this moment in time.

It is, undoubtedly, a unique time; there is new and exhausting political and social upheaval to wake up to every day. Occurring simultaneous to this is the increasingly attractive decision to become politically detached. For those who don’t consider this an option, those of us who feel compelled to remain vigilant until the bitter end, aren’t we like Lisa? Just as Lisa helplessly watches a bus plow through a red light and over a human being in slow motion, aren’t we also subjected to watching a national nightmare play out in front of our eyes? Think: Clockwork Orange eye-clamp scene.

Lisa experiences a complete and utter loss of control over her situation, yet her scrappy efforts to bring justice to fruition are her attempt at proving that she is a moral and deserving person. And, experiencing our own total lack of control over our own situation, we also try to make meaning out of this wreckage by desperately clinging on to acts of protest, art and dialogue in order to not only establish ourselves as good and just people, but to affirm our own existences. Is that selfish or is that self-preservation?

Lisa outwardly, openly and passionately screams to the world that she has killed a woman, and the world shrugs in response. It’s the same kind of desensitization to atrocities and crimes that’s so obviously ubiquitous — when’s the last time a headline about corruption or a mass murder produced an audible gasp as opposed to a defeated sigh?

This isn’t, however, a dark film. In fact, the closing message — and perhaps the main message — of the film is reassuringly poetic: an overall emphasis of art as a means for forging human connection, understanding and empathy. Throughout the film, Lisa and her mother struggle to understand one another, and it’s only in the final scene, while watching an opera at The Met, that they exchange a shared knowledge.

We make sense of our lives using art that speaks to us, art that attempts to clarify our experiences in a way we’re often unable to. This, of course, isn’t a novel idea, but maybe it’s a good reminder to continue to seek out good, challenging, painful art when all else seems futile.

And don’t we all need a good cry at the opera with our mom once in a while?