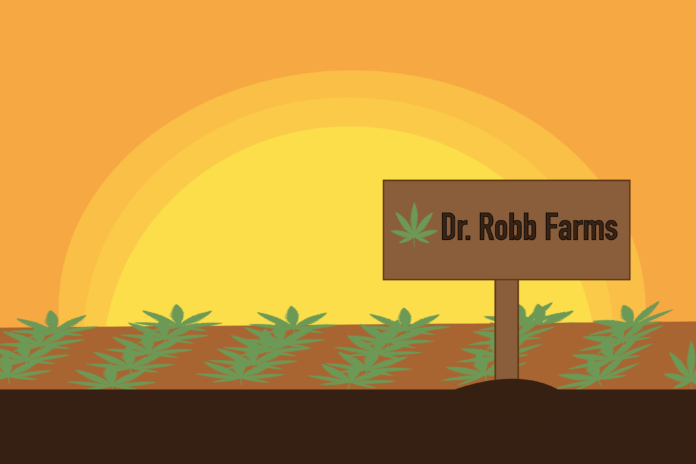 Dr. Robert Flannery, The First Ph.D. Of Pot™ — a title he has personally trademarked — is both the CEO of Dr. Robb Farms and a UC Davis alumnus. He’s always had somewhat of a connection to plant sciences, however, this didn’t truly manifest until college. Flannery recalled growing up in Southern California where his maternal grandfather grew a large amount of fruits and vegetables on an “itty bitty piece of property.” Flannery’s grandfather was born and raised in Malta, a small cluster of islands in the Mediterranean, where there was not much arable land so families grew their own food.

It was after taking BIS 1C with the late professor of plant biology, Robert Thornton, that Flannery decided to major in plant biology.

“I was growing out a beard, I was wearing my Birkenstocks and socks and things like that — your typical Davis things — and lo and behold, Dr. Thornton and his TA at the time, we [all] looked like we could have been family members,” Flannery said. “We all just had the same look going on.”

As a student athlete, having to submit to urine tests every other week to ensure his eligibility for football meant that he never consumed cannabis in any form — however, this wouldn’t be an accurate indication of how his career would later develop. Flannery is now spearheading cannabis cultivation research and finds his passion in educating the public about the different benefits of the plant and drug.

Recruited to Dr. Heiner Lieth’s lab after finishing his undergraduate degree, Flannery continued his education at UC Davis as a Ph.D. student. He had been a strong student in his math classes and worked on mathematical modeling related to hydroponics and greenhouse production. Flannery still talks to Lieth often and jokes that the real reason he was accepted to the lab was to carry all the heavy equipment.

Later in his career, as production director at SPARC, “a long-trusted source for the highest quality cannabis,” according to its website, Flannery oversaw all aspects of cultivation and production for the company. As he got more involved in the industry, he talked to many growers in California and other states.

“I really quickly realized that cannabis cultivation at that time was pretty much a Wild West since it’d been illegal [recreationally],” Flannery said. “These growers didn’t have access to quality research or coming to UC Davis or Cal Poly and saying, ‘Hey, I need help with this.’ A lot of them had to figure it out themselves, which is rather impressive.”

A notable problem, though, was that pesticides and compounds that growers were using for plant growth regulation should not have been used. Myclobutanil, which is used as a fungicide, released hydrogen cyanide when heated — the compound that was used in Nazi concentration camps for mass killings, Flannery explained.

When he told growers that myclobutanil should not be used on cannabis, many of them would respond with some version of “I don’t care,” which blew his mind. Since the legalization of recreational marijuana, however, the California Department of Pesticide Regulation has myclobutanil listed as a pesticide that cannot be used in cannabis cultivation. Flannery said consumers should feel safe purchasing from a licensed dispensary given the fact that cannabis cultivation is regulated.

One day when he was at work at SPARC, Flannery received a call from his mother informing him that she had been diagnosed with triple negative breast cancer. Surrounded by cannabis at work, he told her that he could get her access to cannabis if she wanted.

“My mom went to college in the ‘60s and she was invited to a pot party — she literally thought she was going to a Tupperware showing party,” Flannery said. “She is really naive when it comes to cannabis.”

She said yes, but said she would only take edibles and wouldn’t smoke. Everything that Flannery had grown and knew was clean was to be smoked, and he had the highest of standards when it came to his mom. Eventually he found Kiva, and his mom says that the edibles “really saved her life” when it came to chemotherapy.

Flannery realized that there was a demand for clean cannabis, but a majority of patients didn’t realize what they were getting and didn’t know if it was clean or not. With his Ph.D. from UC Davis and experience in the cannabis industry, Flannery had the idea for Dr. Robb Farms.

“Ultimately, [recreational legalization] opened up the marketplace,” Flannery said. “California is the largest market for cannabis.”

He recalled a discussion with a colleague about one of the larger Canadian cannabis companies, mentioning that there were 30,000 registered cannabis patients in Canada. In California at that time, there were 1.6 million.

When recreational use was legalized, not only did the size of the marketplace increase as people moved away from the illicit market, but it also broadened the field in research.

Davis, particularly in agriculture and medicine,” Dan Flynn, the Dean’s representative on Strategic Initiatives for the College of Agricultural and Environmental Sciences, said via email.

Flannery agreed with this and mentioned notable findings that contradict common misperceptions about cannabis.

“‘There’s also a lot of science and [increased] knowledge around cannabis,” Flannery said. “We’ve been fed a lot of propaganda the past 80 years and beyond that cannabis is this terrible, terrible crop. We don’t see an increased incidence of COPD, we don’t see a decrease in lung capacity for people who smoke cannabis every day. This is a fairly benign plant.”

The LD50, or median lethal dose, is the amount of a substance that is lethal for half a population, is unknown for cannabis, but it is estimated to be well over 300 pounds, according to Flannery.

“Ultimately, when it comes down to it, cannabis is less acutely toxic than many other substances,” he said.

Flannery is on the board of advisors for the Cannabis and Hemp Research Institute, which was established to provide leadership in different types of cannabis research.

“Legalization also prompted the great need for research on the economic, legal,

health and environmental impacts of legalization,” said Cindy Kiel, the executive associate vice chancellor from the office of research, via email. “Unfortunately, legalization in California has not affected federal requirements related to cannabis remaining listed as a Schedule 1 drug. We

source at the University of Mississippi.”

Products offered by Dr. Robb Farms include Mom’s Formula, a daily tablet with CBD and THC, and Eagle, which is Flannery’s ode to his grandfather. Flannery’s grandfather was a paratrooper who landed 20 miles away from the front lines during D-day. In fighting his way up, a grenade exploded by him and his arm was severed below his elbow. After pretending to be dead as Nazis took his belongings, American soldiers helped him bandage his arm and he fought his way back to the frontlines. He was sent back to the U.S., where he earned three Purple Hearts and American citizenship. He subsequently got a large American eagle tattooed across his chest. Flannery’s grandfather died from brain cancer in 2001 and never had cannabis to help him through it.

A customer who survived the Oct. 2017 Las Vegas shooting had intense anxiety and couldn’t sleep; she got Mom’s Formula and told Flannery that she didn’t realize it was working until she ran out of them because she didn’t feel high. Mom’s Formula is not designed to produce the euphoric feelings associated with a high, and instead it is intended to alleviate anxiety.

When Flannery was initially in the process of deciding where to build a “playground,” he looked all over California —Sacramento, Oakland, Los Angeles, Long Beach, San Diego and the Emerald triangle. Business partners suggested looking at Coachillin Canna-Business Park in Desert Hot Springs.

“Cannabis can be a very energy intensive product,” Flannery said. “That is not lost on me, that’s not lost on people at Coachillin.”

The more Flannery and his business partners ran the numbers, the more they saw that Coachillin was a no-brainer. Not only does the complex aim to be sustainable, the costs were significantly cheaper and they would be able to easily expand.

“More so than anything else, I’m a scientist,” Flannery said. “I like to research, I like to play with the new toys that are coming out. And the best way to do science and research is to eliminate variables, [which] is much easier to do in a controlled environment.”

Flannery remains quite involved on the UC Davis campus, giving an annual lecture on cannabis cultivation in the spring. Last year, he was a guest speaker for a graduate level course, something which he has been asked to do again this year.

This past fall, Flannery was inducted into the UC Davis Athletic Hall of Fame, which he was “exceedingly honored” to have happen. He is also currently a finalist for the board of directors of the Cal Aggie Alumni Association. He says that he and his wife are indoctrinating their children to be Aggies, and their son’s middle name is Davis, after UC Davis.

Flannery also mentioned that meeting his wife was the biggest highlight of his time at UC Davis — he was the captain of the football team and she was the captain of the dance team, making them “one of those couples everyone hates.” Meeting the type of people “that you meet at a place like Davis” and playing football were also extremely influential, and his fondest memories of his time in college are with people that he still talks to today.

“UC Davis is something that’s very near and dear to my heart,” Flannery said. “I definitely foresee significant involvement with the campus and university moving forward with cannabis.”