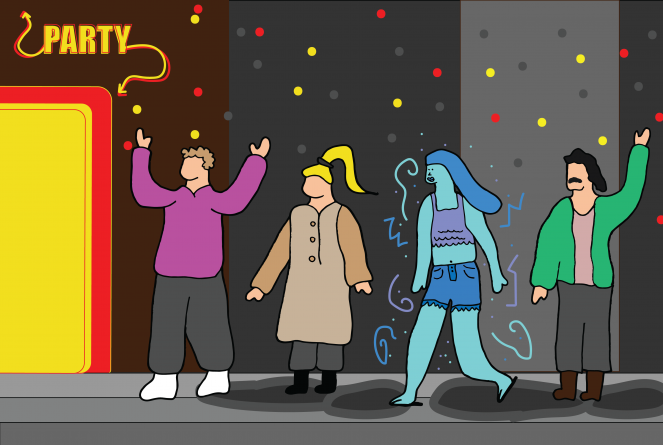 Our college experiences are dictated by superficial values

When I entered college, I was riding on the coattails of my high school experience in marching band, spring musicals and orchestra tours to define my social standing. To some extent, I stayed within this niche, as my friends are all former high school band kids and we all share similar interests.

As first years, we are offered the opportunity to explore many different groups which we were originally barred from in high school (think “Stick to the Status Quo” from “High School Musical”). It was refreshing to be able to vacillate between different social circles and learn about everyone — from former homecoming queens to class presidents.

I’d also heard plenty of stories about the college party life. I’m sure we all did. It wasn’t UC Davis specific, but college students and alumni often felt it necessary to brief me on the joys and pitfalls of these mystical gatherings.

So I decided that I would try out these parties — and try I did.

At my first party, I was grabbed at the waist by a boy I’d met less than a minute before. At my second party, I danced with my friends until we became uncomfortable with the provocative stares of strangers. At my third party, my fingers turned blue while waiting outside in the cold and, upon entering the party, they felt like fire.

These experiences, albeit disturbing, were not necessarily uncharacteristic of typical American university parties. There is a distinctly sexist idea that dominates party culture in college: the importance of your physical appearance.

The way you look is undoubtedly placed above your whole person. Droves of people scantily clad in summer-y tank tops and shorts lined the sidewalks of frat row. This is the unspoken rule of college parties: More often than not, you have to look a certain way to get in.

Many, including myself, are generally fine with putting on a little extra (or in this case, less) to go out. Dressing up and feeling sexy is liberating. When have we ever had the chance to truly do that before? It’s not like we’re going home to our parents after our late nights.

What is unacceptable is the way that this translates to women becoming ornaments for the party’s attractiveness and popularity.

Whenever I go out to college parties, I feel like I’m presenting a shell of myself. I dance and I laugh, I’ll chat idly with whoever comes my way, but I never feel truly seen. I just feel like another girl.

I’ve learned that this isn’t merely a decision to dress up, but a ticket inside. As my friends and I shivered down the street, acquaintances remarked that they were “shocked” that we didn’t get in. If we didn’t get in, there was no way they could’ve. It was a stark reminder that our bodies were first priority, our tickets to a “successful” Friday night.

If I want to dress up and dance with my friends at a party, I should be free to do so without fear that someone will take it as anything more than that. I’m tired of feeling like eye candy.

Some may argue that when we dress “provocatively” at parties, we are doing so by our own volition; no one is forcing anyone to dress a certain way. This is absolutely true, but personally, I’ve found that it’s largely a matter of feeling included — a feeling desired by everyone.

And it feels like a rite of passage for first years to torture themselves at these parties in this way.

If these parties are so crucial to a college experience, why are they so miserable? Maybe it’s because, despite all the excitement around getting ready and taking pictures, we are only doing what we think we’re supposed to be doing.

In a new environment, with 35,000 people in one space, the world is ruled by your first impression — which, in this case, is your appearance. It’s an unfair, superficial world and we’re all just swimming in it.

Our lives shouldn’t be dictated by movie tropes like “Project X.” A well-lived college life isn’t one where you go out every Friday night, though it can be. The most satisfying life is one where you do what makes you happy, with the people who make you happy, and all of this should be determined by you.