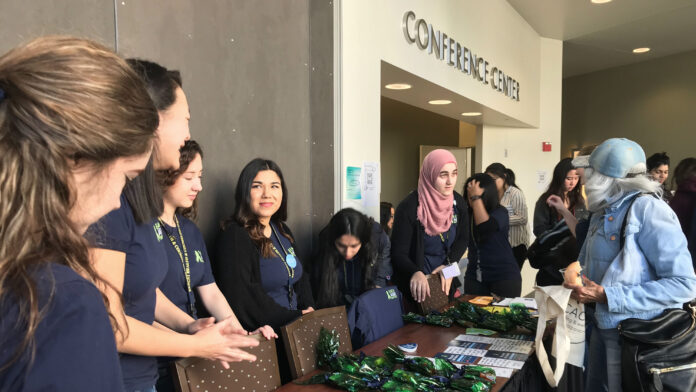 The two-day conference is run by the mental health initiative with support from ASUCD — though getting funding has not been easy, according to Deborah Widjaja, co-director of the Mental Health Initiative. Widjaja, who is also a fifth year neurology, physiology, and behavior major, attested to the efforts of the mental health initiative team members and board for organizing the event.

“I personally have worked with many other organizations both in high school and my earlier years in college and I’ve never worked with a team as compassionate and loving and dedicated as these folks who are fighting for a cause that is so highly stigmatized,” Widjaja said.

The conference sought to raise awareness for various topics surrounding mental health as it becomes an ever prevalent issue in college students. According to a report by the American College Health Association, 41.9% of college students have “felt so depressed that it was difficult to function” and 63.4% have felt “overwhelming anxiety” in the past 12 months.

Opening keynote speaker Dailyn Santana, a Cuban American actress and mental health advocate, started off the conference with a spoken word poem. Her presentation focused on combating stigma as she spoke of her own experiences with bipolar disorder.

“I remember my parents feeling personally responsible for my manic episode. They felt like they failed me as a parent, that it was all their fault,” Santana said. “But, the reality is, my illness had to finally make itself present in a way that I could finally get the diagnosis and help that I need.”

The conference also featured 12 different speakers in four different 50-minute workshop sets with the option to choose between 3 speakers during each workshop.

Each workshop set featured a range of topics that touched upon different aspects of mental health, including police use of force and individuals with mental illness, harm reduction and music therapy. Second-year neurology, physiology, and behavior major Macy Mehdioun, who is also a team member of the UC Davis mental health initiative, said that this broad approach is crucial in gaining perspective on mental health issues.

“We address mental health with people on the autism spectrum* or with immigration, so it’s trying to address different topics and the way mental health connects with everything,” Mehdioun said. “Just to learning something new and [to be] able to use what you learn from this conference in everyday life.”

While a wide range of topics were covered, each speaker delved deep into their subject area. For instance, Dr. Laramie Taylor, who is also a UC Davis professor in the Department of Communication, began his presentation about the power of the media in influencing how one thinks about their body by introducing research data, building upon this to draw conclusions about how to improve mental wellness.

Student and professional panels were also run during the first day of the conference, providing attendees a chance to learn from industry specialists in counseling and emergency medicine. The day closed out with a one and a half hour Question Persuade Refer (QPR) session, which helps individuals identify the signs of suicide and how to respond in such a situation.

The city of Davis itself offers many different resources to support mental health wellness and awareness, and those were highlighted during the resource fair at the conference. Groups such as the Yolo County chapter of the National Alliance on Mental Illness (NAMI), an organization that educates and advocates for mental illness recovery, and the Postpartum Anxiety N’ Depression Advocates (PAN’DA), a student organized club at UC Davis that raises awareness about perinatal mood disorders were tabling at the event.

Attendees overall said that the conference shed light on some of the more important issues in mental health. First-year biochemistry and molecular biology major Jagnoor Randhawa found the event to be greatly beneficial in expanding in her awareness of mental health and ways of approaching the relating issues.

“I feel like having a mental health conference is a great way to show awareness and also reduce stigma regarding mental health issues,” Randhawa said. “Due to mental health awareness, the chances for early intervention can increase, which can result in a fast recovery.”

Co-director of the Mental Health Initiative Cindy Chen, who is also a fourth-year animal science major, says her hope is that the mental health conference leaves a lasting impact year after year on the people who attend.

“The workshops and panels are equally important and it’s a place for people to share their stories, and it gives people the chance to see how each individual handles their situation differently,” Chen said. “I hope people keep [the stories] in mind and that gives them more ideas for how to spread mental health awareness in the future […] and that it kind of helps alleviate the stigma a little bit better, and that it can help keep the conversation going.”

*The Alternative Treatments for Autism workshop was canceled and a Supporting People with Hoarding Challenges workshop was held instead.