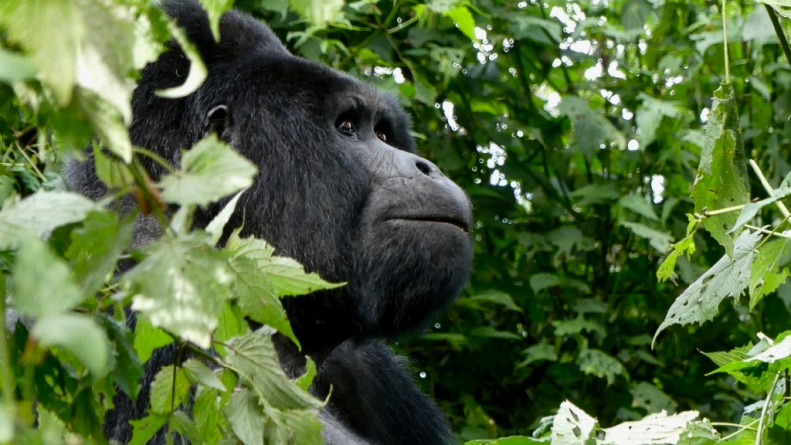 The 2018 Bwindi-Sarambwe mountain gorilla survey shows that mountain gorilla population numbers have increased in Sarambwe Reserve, the Democratic Republic of the Congo and Bwindi Impenetrable National Park, Uganda, according to the Uganda Wildlife Authority. The minimum count of 459 mountain gorillas in these regions will increase after UC Davis finishes their genetic analysis and finalizes their count. The previous count in 2011 found 400 gorillas.

The total world population of the endangered mountain gorillas now stands at 1,063. The entire population encapsulates gorillas from the whole range, including the 459 gorillas found in the recent survey combined with the 604 gorillas from a 2015-2016 survey from the Virunga Massif (mountains) bordering the Democratic Republic of the Congo, Rwanda and Uganda.

The International Union for Conservation of Nature (IUCN) changed mountain gorilla status from critically endangered to endangered in 2018. But their populations still remain quite small, said Gladys Kalema-Zikusoka, the founder and chief executive officer of Conservation Through Public Health (CTPH) and one of the collaborators on the study, via email.

“Their numbers have been increasing since about the mid to late 80s when they hit their all-time low, that we were actually legitimately concerned they were going to go extinct,” said Jena Hickey, a gorilla ecologist at UC Davis. “They were at the brink, and they are coming back and that’s why the surveys are so important.”

Calculating population levels is a difficult and long process, Hickey said. Starting in March of 2018, researchers collected fecal samples from mountain gorilla habitats in Sarambwe Reserve and Bwindi Impenetrable National Park. The collection team of about 40 people conducted two 10-week sweeps through the terrain, each four months apart, to ensure they got all the samples.

“We’re going through dense forests, deep and steep terrain,” Hickey said. “They really are in the mountains.”

Almost 2,000 fecal samples were taken to the Mammalian Ecology and Conservation Unit of the UC Davis Veterinary Genetics Laboratory, said Ben Sacks, an adjunct professor in the veterinary genetics laboratory. Over the span of three months, Liz Kierepka, a postdoc in the veterinary genetics lab, isolated and genotyped the DNA. Like a fingerprint, each sample could be traced to individual mountain gorillas, resulting in the ability to count the population.

“We are trying to figure out which individuals were at each site, and ultimately we can use all that data to determine how many gorillas are out there, because you know they just don’t line up to be counted,” Hickey said.

It took just under two years to reach the minimum population count, which was concluded in early December 2019. The team has not finished their genetic analysis to reach a final count, which will be higher than the minimum value, but Sacks said they hope to have the number in the next few months.

These surveys are important for conservationists to know the effectiveness of their conservation plans, Hickey said. Researchers use surveys to evaluate population trends and get estimates of whether the populations are stable, declining or increasing.

“We’re basically trying to take roll and see who’s still there, and who had offspring this year,” Hickey said. “If you have immigrants from another population, you can track that and see how that relates to reproductive success.”

The census was beneficial not only for calculating the population numbers of mountain gorillas. It also provided an opportunity to detect and reduce human-related threats to the animals such as disease, snaring and illegal harvesting, Kalema-Zikusoka said.

Since 1986, when mountain gorilla population numbers reached a low of 250, Gorilla Doctors has worked to provide veterinary care to wild gorillas. In this survey, they also helped collect samples, said Kirsten Gilardi, the executive director of Gorilla Doctors.

“We’re going into the forest to check on the health status of individuals if we receive reports that an individual gorilla has been injured or is showing signs of illness,” Gilardi said.

Many mountain gorillas have become habituated, or accustomed, to the presence of people due to tourism and the veterinary care they receive, Gilardi said. The census was important because it accounted for both habituated gorillas, the ones that have been given names like Katwe and Mubare, but also the lesser known gorillas in the population.

Since gorillas share 98.4% of their genetic material with humans, they can catch human diseases and infections. Even though habituation provides protection and economic benefits for gorillas, it is important to minimize disease risks when they come into contact with humans, Kalema-Zikusoka said.

Tourism is important for gorilla conservation because it educates and involves people from all over the world. This revenue helps African governments fund the parks, Gilardi said.

“The world gets to come and see these animals and it makes them appreciate and value the gorillas, but it also generates revenue for the governments and they use that revenue to manage and protect the parks,” Gilardi said.

Veterinary care, protection in national parks and revenue from tourism all contribute to the rise in mountain gorilla population numbers, Gilardi said.

“They’re magnificent animals,” Gilardi said. “Their health is threatened by the fact that they come into contact with people every day. [It] is what saved the species from extinction, but it also means that we have an obligation to take care of them.”

For Kalema-Zikusoka and Gilardi, protecting mountain gorillas is important because they are so similar to humans.

“One of the things [that has] always struck me when I see them is how like humans they are in terms of the level of affection they have for each other and the way that they interact,” Gilardi said. “It is very heartwarming and very life-affirming to see a wild animal like a gorilla.”

“I think all wildlife have inherent intrinsic value,” Gilardi said. “It’s just really important for everyone, not just veterinarians of course, but biologists, conservationists, ecologists and everyone to be doing what we can to strike that balance between what a growing human population needs but also knowing that wildlife populations often share that ecosystem with us.”

In future surveys, Kalema-Zikusoka expects to continue to see an increase in the mountain gorilla population numbers as long as law enforcement, wildlife monitoring, veterinary care and community engagement efforts continue to improve.

“We’re a big collaboration and there’s a lot of partners to make it happen,” Hickey said.

The collaborative team is proud of the success of their efforts with mountain gorillas, since there are few positive conservation stories, Gilardi said.

“The numbers of all great apes in the wild are going down,” Gilardi said. “But with mountain gorillas, the census results are showing that they just keep increasing.”