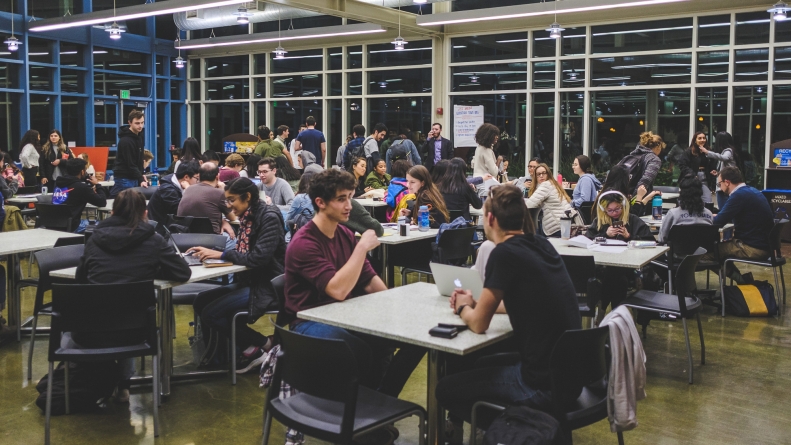 ASUCD Senate members discussed the upcoming ASUCD Winter Elections happening Feb. 18-21 and the Basic Needs and Services Referendum which will be on the elections ballot, at the association’s quarterly town hall meeting on Jan. 30.

Despite the looming elections, where six new senators, a new executive team, a new external vice president and a new student advocate will be elected, the majority of students attended the town hall to learn more about the proposed increase in the ASUCD Base Fee, a current $8 per-quarter fee that all undergraduates pay. The fee, which has not been increased since 1979, will increase after this election if the Basic Needs and Services Referendum passes.

“I don’t have any knowledge about the referendum,” said Kabu Doku, a second-year student. “I hope to get more information from the board tonight.”

Students raised questions regarding the “basic needs” aspect of the initiative referendum. Two students who wished to remain anonymous inquired, “Why do you call it ‘basic needs’ and what do you plan to do?”

In response, senators held discussions at each table in order to encourage all participants to voice their opinions, ensuring that no question was left unanswered. ASUCD Senator Anna Estrada explained to students that ASUCD is in an extreme budget deficit — a deficit that places a long list of student services on the chopping block unless the association receives additional streams of revenue.

Many students inquired about the specific programs that the fee increase impacts. In response, Estrada gave a list of services affected by the base fee, including Picnic Day, the Bike Barn, the Aggie Reuse store, The Pantry, Whole Earth Festival, KDVS, the CoHo and more. She also explained that certain services have already been cut in response to budget deficits, pointing to the recent dissolution of Tipsy Taxi.

Estrada noted that student fees have not changed since 1979 and that UC Davis students pay significantly less than students at other UCs, noting fee rates at campuses like UC Santa Barbara, where students pay nearly $600 a quarter in base fees.

“We are the only autonomous [Associated Students organization in the UC]; we manage our own budget,” Landrum said. “Other student governments do not manage their own budget, it is their administration that does.”

Landrum’s reminded attendees that the proposed initiative referendum is not a university-led tuition hike, but rather a student-inspired proposition, clearing misconceptions about the initiative.

All the senators reminded attendees that voting for ASUCD elections will take place from Feb. 18-22. Twenty percent of students must vote, otherwise the ballot referendum’s result will not count and will not even be considered. Of those who vote, 60% must vote in favor of the referendum in order for it to pass. Specific information about the initiative referendum and voting details can be found at asucd.ucdavis.edu/vote. Once polling opens, students can vote at elections.ucdavis.edu.