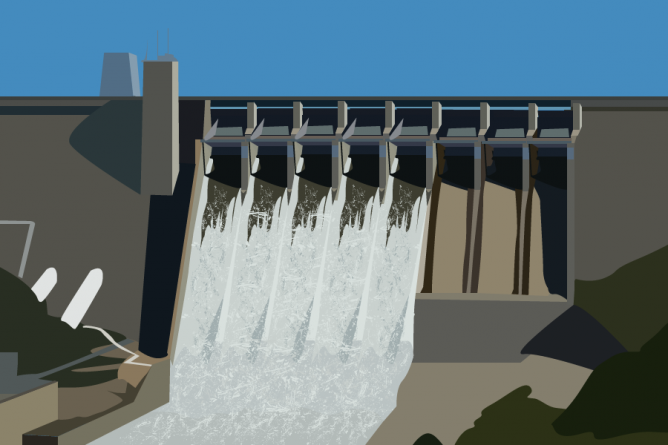 Construction officially began on the 64-year-old Folsom Dam, with government leaders ceremoniously digging the first shovel into the ground. Officials are hoping to raise the structure by three-and-a-half feet to reduce flood risk to the greater Sacramento area by 2025, when the $373 million Folsom Dam Raise project is expected to be completed.

Built in 1955, the Folsom Dam is not one single building, rather, it is a collection of dikes surrounding the central tainter gates and two dam wings. The whole structure serves several purposes, including providing water to the local region and hydroelectric power through the Folsom Powerplant.

The primary role of the Folsom Dam is to mitigate the effects of flooding on the Sacramento region, the risks of which are described on The California Natural Resources Agency’s website.

“The Sacramento metropolitan area is considered among the highest flood risks in the nation, and flooding in the area could impact upwards of 440,000 people and impact an estimated $58 billion in property,” the website read.

To kick-off the construction project, the U.S. Army Corps of Engineers Sacramento District held a ceremonial groundbreaking on Jan. 21. Several notable speakers attended the event, including congressional representatives and members from federal, state and local agencies.

In a video posted by the U.S. Army Corps of Engineers, Rep. Ami Bera discussed regulating and storing water for Sacramento residents.

“This Dam Raise project, along with the Joint Federal Project — the spillway — really does give us that capacity to keep tens of thousands of residents that live downstream from Folsom Lake safe,” Bera said. “But it also gives us that capacity in dry years to hold more water back as well and manage that dual risk.”

Though three-and-a-half feet may not seem like much for a structure standing at 340 feet tall, the upgrade will increase Folsom Lake’s capacity by 43,000 acre-feet, according to a press release from the U.S. Army Corps of Engineers in the Sacramento District.

“The new Folsom Dam Raise project builds on the new auxiliary spillway by incorporating features that take advantage of weather forecast-informed decision-making, a new process that enables the Bureau of Reclamation to make more precise water release decisions,” Stewart said via email. “This allows the Bureau of Reclamation to conserve water for supply deliveries, power generation, and to manage the cold water pool in Folsom Lake to provide suitable temperatures for [anadromous] fish species in the Lower American River.”

State officials have struggled to manage water storage before, especially during the heavy rainfall in 1986 and 1997 that lead to the establishment of the Folsom Dam Raise Project. In the Final Environmental Impact Report released for the project last January, federal agencies described the response to those weather events.

“The effects of the 1986 and 1997 storms raised concerns over the adequacy of the existing flood risk management system, which led to a series of investigations on the need to provide additional protection to Sacramento,” the report read. “The results of these investigations led to authorization of several flood risk management projects in and near the American River Watershed.”

In recent years, some of these projects have already been completed, such as the development of an auxiliary spillway 50 feet downstream from the dam in 2017 and the addition of the Folsom Dam Bridge in 2009. Those two projects together cost just over a billion dollars.

The project already has been authorized $373 million in funding through 2025, according to Stewart.

“Funding for the Folsom Dam Raise comes from state and local sponsors (the Central Valley Flood Protection Board and the Sacramento Area Flood Control Agency) as well as federal funding,” Stewart said via email.