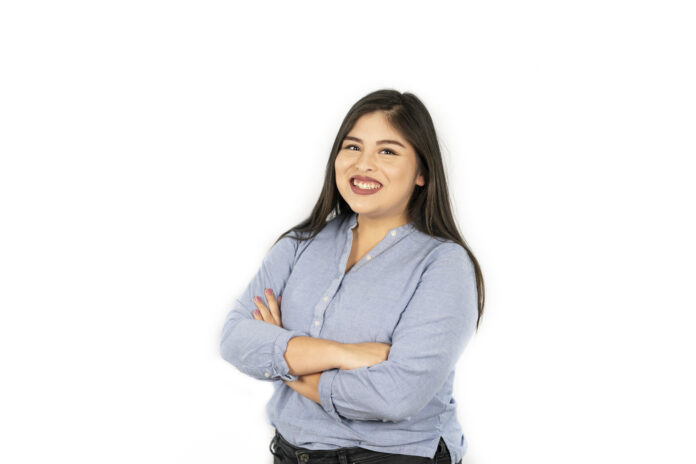 Maria Martinez: Hi everyone, my name is Maria Martinez, I’m a second-year political science public service major, and my pronouns are she/her/hers.

TCA: Are you associated with a slate?

TCA: And why did you choose to run with Thrive?

MM: So for a while, I was a little hesitant about running with a slate, just because there is a lot of conflict, but in the end I ended up choosing Thrive because I feel that the overall mission is to benefit students across the board, and in all cases — whether it be, you know, resources in the classroom or supporting them after graduation. I think Thrive has a very holistic view of student success and how you go about doing that.

TCA: As the potential External Affairs Vice President, how do you see your role in the association?

MM: So for my first two years here at UC Davis, I got involved in ASUCD as a Senator and as chairman of the Judicial Council. So I see how ASUCD functions, and the way that I envision the Office of the EAVP is just overall, the main focus should be supporting the students on and off campus. And so I’m envisioning EAVP working with all of the offices, all the Senators, the Executive board. Just overall supporting. Although, I feel like EAVP has more of an impactful role off campus, lobbying and enacting policies and working with UCSA [UC Student Association]. I believe that reporting back and kind of bridging the connection between our actual government representatives and our student body representatives is kind of the goal that I have.

TCA: How do you see yourself working with the UC Student Association and lobbying at the Capitol? How do you think that’s going to go for you?

MM: So one of my goals is to work with UCSA on the Fund the UC campaign. Fund the UC is designed to ensure that there’s accessibility, quality and affordability to the University of California as a whole. So they kind of stay focused on lowering tuition and fees. My plan is to run to Chair that campaign, because it’s something that I feel like overall, every student, [thinks]

is important — to make sure that tuition and fees stay low, stay where they are. Because I know right now, there’s a proposal to increase tuition and fees and stuff, and Fund the UC is working really hard to keep it at a level amount. And so that’s kind of the direction that I would like to take.

TCA: What is your stance on the fee referendum?

MM: I support the fee referendum. I know that ASUCD encompasses a lot of units that have a big impact on campus. I feel like not many people are aware that even the CoHo is run by ASUCD or Picnic Day or the Whole Earth Festival or a bunch of events like that. So I definitely support it [because] I know that without that money, our campus wouldn’t be as good as it should be. For example, without Unitrans UC Davis would just collapse. So I definitely support the fee referendum.

TCA: What have you done to support the fee referendum?

MM: What I’ve done specifically is kind of reach out to the communities that I’m involved in to explain what the fee referendum is. So for example, I’m involved in a sorority called Sigma Alpha Gamma, and a lot of the people in my chapter don’t necessarily know too much about ASUCD, but I realized that since it’s a lot of new members, those votes can count. So I made sure to speak in our chapter meetings [and] speak to the people in other fraternities and sororities that I know are under our council because I know ASUCD is not the priority in people’s minds or they might not understand exactly what it is. Yeah, just talking to people that aren’t necessarily involved in the association and just explain how it does affect them, even if they don’t necessarily have an active role in the association.

TCA: Can you talk about your communication skills and the extent to which you think it’s important to keep an open communication between your office and The Aggie?

TCA: I don’t know if you know about the Boards of Units Directors (BUDS), but basically all of the ASUCD unit directors meet at least once a quarter. Is maintaining communication with BUDS and showing up to meetings something you would be interested in?

MM: Yeah, definitely. The units of ASUCD are kind of the backbone of this university in terms of [providing] student services, and in any way the [Office of the EAVP] could be of help to the units, whether it be looking for government grants that the government offers or anything like that or if there are any bills that need specific lobbying. I think that my role would be pretty necessary.

TCA: As the External Affairs Vice President, you would be the outward face of the association in the community and outside of it, especially with UCSA as at the capitol. What do you hope that others would immediately understand about ASUCD once they meet you?

TCA: What made you want to run for this position?

MM: I wanted to run through this position because I believe that I can represent a portion of ASUCD that isn’t necessarily represented in the Capitol. I’m a first-generation college student, so my experience is completely different from other people’s experiences. But regardless of my background, I feel like, as a student here, I can represent the interests of the entire student body. And I’ve always had a passion for public policy and understanding how to affect students. I know that there’s miscommunication between students and their elected representatives in government. I want to be a gap between people that don’t see themselves represented.

TCA: If elected, how would you redefine the role of the position, if you think that’s necessary?

MM: There’s not really a precedent of what should or should not be done in the office, so I conducted some research into other campuses. For example, I looked at UC Berkeley’s [office] and something that I would want to implement from their office into [ours] is more student involvement within the office. Right now, I’m not entirely sure how big our office is, but something that I would want to reinstate, or [implement], is a voting coalition — a committee of students specifically dedicated to pushing out voting, especially with this year being a big catalyst for politics. Other things would be the reinstating of [the] lobby corps. So, having people that are interested in public policy and interested in lobbying being sent to the Capitol. I understand that the office has a pretty reasonable budget, so that’s something that I want to do. Something else that I noticed is that UCSA holds conferences for any student in the UC that wants to attend, so I want to send students to the lobby conference in Sacramento. Because although I can be in these meetings and speaking for the campus and stuff, I think the most effective if students here that really care about the issues [attended].

TCA: Are there any other comments or thoughts you feel are important that you would like to mention or address?

MM: Yeah, so I kind of want to talk about what I want to do for the housing crisis in Davis and how I want to work with the city of Davis to get a handle on things. Starting on campus, I would like to work with the Housing Advising for Undergraduate Students [HAUS], which is a unit of ASUCD. I would want to implement and have kind of a team of advisors under that unit and make it mandatory for first-year students to meet with them [throughout] winter and spring quarters. Housing is kind of the pillar of having a good education because, with housing instability, not having a place to sleep and study is really tough. I think that if first-years have that kind of base of understanding how the housing system works, or even what a lease is, it would be something that prepares [them for] the future.