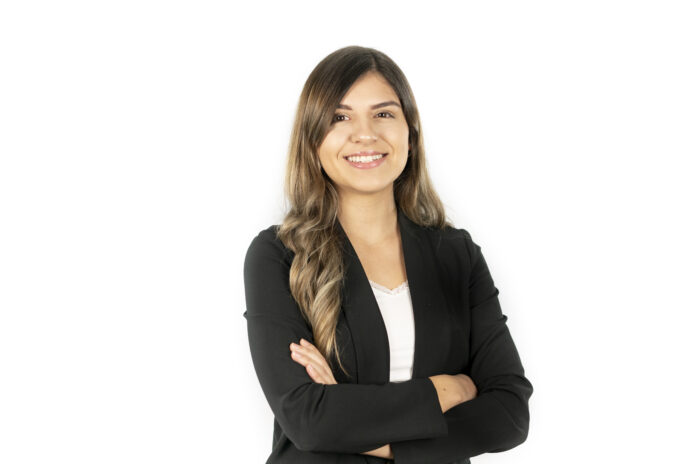 The California Aggie: Can you introduce yourself — your name, your year, your major and your pronouns?

TCA: Are you running on a slate?

LE: Yes. I’m running with the BASED slate.

TCA: Why did you choose BASED?

LE: First of all, their values aligned with mine. I think that also just looking at the people who had ran under BASED previous years were the same people whose platforms I sort of believed in myself and who I personally voted for. I think it just made sense to run with a slate that I support. If I don’t see myself being in support of my fellow peers who are running under BASED, how could I expect other people to buy into our vision as well.

TCA: What were some of those values that aligned with your values?

LE: [BASED’s] whole thing is BASED in action, community and advocacy. For me, the based in advocacy portion was the biggest sector. When I first came to campus, I was originally an environmental policy major. And over the course of taking classes on campus, I realized that I was more passionate about the people aspect of that. It came down to the environmental justice and the environmental racism aspect of it, which sort of led me to go more into the policy sector. This last quarter, I was interning in Sacramento with the Association of California School Administrators. Through that, as well as being a part of different orgs on campus, I realized that my true passion lies in advocacy, and that’s really what I see myself doing for the rest of my life. With that being said, BASED is a slate that really focuses on voicing concerns from all communities and advocating on behalf of all the student body, which I truly believe in.

TCA: What are your platforms and how do you plan on accomplishing them?

LE: I’m running on three platforms. The first one is mental health. I’m a first-generation student and just through my experience as a first gen., and just sort of having to navigate the system on my own and learning as I go, I realized that in order for us students to succeed, we need to support them not only inside the classroom but also outside the classroom. We hold students up to such a high standard, and to want them to succeed in the academic and personal level I think it’s really important that we provide the adequate resources to do so. The mental health portion came also just [through] being part of different orgs on campus. I realized that oftentimes, you sort of use these orgs and the community to support one another, which I think is great. But I think that we can only do so much for one another. There comes a point in time where we need someone above us that can provide those resources. To do that, I hope to work with the Mental Health Initiative and drop legislation that essentially increases the number of counselors on campus. With this referendum that’s going to be on the ballot — and fingers crossed that that passes — that will increase the amount of resources that we have in terms of money, [and] I hope to really advocate for that to go to mental health and have more resources for students that also acknowledge diversity in students’ needs.

TCA: How were you thinking of being able to support an increase in the number of counselors?

LE: Working with the Mental Health Initiative. Because of this referendum that’s on the ballot — that I think we’re all really pushing to be passed — I think that if we had more money allocated to the initiative we could potentially hire [more counselors]. My idea is having a commission that specializes in mental health. I know that we currently have a commission that deals with student health and wellness. But I think that having one that just pertains to mental health would allow us to establish our own ASUCD counselors that work alongside the counselors that are offered to the mental health center. But just in the sense of not having it go through them for insurance purposes, having it [be] something that’s available to all students.

LE: My second piece of my platform is sexual assault awareness. Currently, I am a committee member of the Sexual Assault Awareness Advocacy Committee. I’m also a part of Greek life. I feel like being a part of both these communities I’m able to see that there’s efforts being pushed on both ends. Not to say they’re not, to some extent, effective, but not as effective as they need to be. For me, it’s about consolidating our efforts and making sure that the resources we currently are providing are sensitive to survivors as well as more efficient. I hope to work with SAAC. My main idea is to provide self defense classes for all students. Although I recognize that this is a very sensitive topic, and a lot of times self defense classes aren’t received as such a positive thing [with questions like] why aren’t you addressing the root cause? I just want to say for the record I do plan to prioritize academic methods to targeting the root cause of the issue. But I think that in the meantime while those become effective, we need to empower our communities in other ways.

My last one’s diversity and representation. This part just comes because I identify as Chicana/Latina and I pertain prominently to that community. I serve on a club on campus CLCA, which is the Chicanx Latinx Collegiate Association, which was actually cofounded by me and a couple of friends last year. Aside from being on the SAAC community, I didn’t have a lot of exposure to ASUCD or what happens within ASUCD. I think that’s the case for a lot of the students within my community. As I started to reach out to different communities just through this election process, I realized that that’s not just the case for my particular Latinx community but, in fact, the majority of communities on campus feel that way. Students didn’t even know about the referendum when I talked to them, and oftentimes people interpret that as like, ‘Oh, it’s because these communities don’t care,’ where I see it as because these communities don’t know how to either voice their concerns or how to get in touch with people who can voice their concerns. The whole BASED slate is behind the idea of having more outreach and having senators be in the communities more often rather than expecting the community to come to us since at the end of the day, we’re working to represent them.

TCA: If elected, what specific ways do you feel you as a senator could better serve the Chicanx/Latinx community?

LE: I think just the fact that I have such a close relationship with them [is important]. I consider myself a leader within that community and just knowing that I do have that direct line with them and that comfort with them where I know that they’re willing to come and voice their concerns to me. Just last Wednesday, we had a panel where a bunch of different orgs come together within the Chicanx community. We all keep each other updated on what the events are up to that month. But this last Wednesday, specifically, we were starting to talk about issues that we think are going on in our community. That’s just one way that I think that I could easily voice their concerns.

TCA: Have you put any thought into what units you might want to adopt as senator?

LE: I think the Mental Health Initiative is obviously a big one because of my platform. I’d also say the ethnic and cultural affairs would make sense for me to work with as well just because of the fact that I really do want to increase the diversity and voice concerns from all students. I want to continue working with the SAAC committee. I think that it just is a good fit for me.

TCA: Are you supportive of the fee referendum?

TCA: In what specific ways have you been getting the word out about the fee referendum?

LE: Whenever we go [campaign] and give our platforms, we also talk about the fee referendum. As much as I can do with my social media outreach, I’ve been posting on my stories and whatnot, making sure that my friends are well informed so that they can spread the word about that.