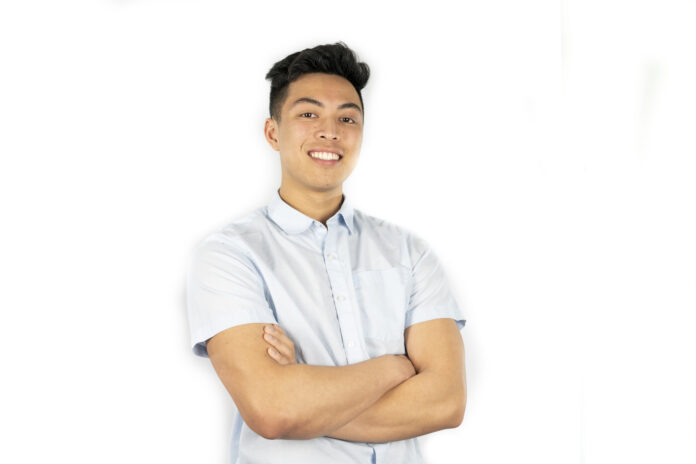 The California Aggie: Could you introduce yourself — your name, your year, your major and your pronouns?

Lucas Fong: My name [is] Lucas Fong. I’m a sophomore. My major is economics, and my pronouns are he and him.

TCA: What slate are you running on and why?

LF: I’m running on the slate of Thrive because I feel like — with having the introduction of ASUCD given to me by Andre Spinoglio and Mahan Carduny, obviously that had a slight influence — Thrive kind of encapsulates more of my vision for what I would do with ASUCD. I think they attack issues on campus. We’re all here, we’re all running for the same reasons: To be the voice of the people and try to resolve issues on campus. What I think Thrive does better than Based is they more spearhead the issues case by case, rather than having a broad spectrum taken you into account. Also, I think that Thrive does a good job of just having equal opportunity [and] equity between different groups on campus.

TCA: What are your specific platforms and how do you plan to accomplish them?

LF: I think the cool part about the whole platform thing, and if and when you get elected to Senator or Senate, is that your platforms can grow. You’re part of the team. So, a lot of these things, a lot of these issues can grow, but where mine stand right now are — the three things I want to tackle — are utilization and exposure [to] different resources on campus. Whether that be academic or mental health seminars and all things entertainment wise — all the above. Secondly, I’d like to work with SJA. I dealt with something since birth, RSV, respiratory syncytial virus. Basically, I have an extremely weak system, and I get sick faster, more severe and much longer than other people. That being said, my freshman year, when I went back home for Thanksgiving, I couldn’t return because I caught adenovirus. And that virus that takes usually two weeks to recover took me two months. And because of that, I’ve been put in a very awkward situation in the past year dealing with professors, advisors, different members of the student judicial administration on campus. And my terms of continuation, however not transparent, the professors weren’t working with me in depth. Reaching out to them, even in person, to come to a clear understanding of what I need to do and steps going forward, and cooperation was just not there. The last piece of my platform would be more recognition and public outreach for different groups on campus, different groups and clubs. I think that the amount of incredible things that each organization does on campus, I feel like the only people who really ever end up hearing about these things are the people in those organizations. I think in just getting that name like UC Davis out there for different philanthropic efforts, achievements and stuff like that, I think that would help our campus grow and get us that extra level of prestige.

TCA: Why do you feel as though you need to be a senator to accomplish your goals?

LF: Well, because I’ve [had] previous experience with school leadership. And to a much lesser note, my entire three years of middle school I was on the ASB team and I was president for that. And in high school. I was on ASB the entire time, too. I know what it is to be on the executive board of the school from a student standpoint. I know that having that voice to really accomplish the goals that you want is only possible if you’re put in a position of power and influence.

TCA: Have you been to a Senate meeting?

LF: I have not, unfortunately. I have class during it.

TCA: If elected, what units would you be interested in adopting?

LF: I had four in mind. The first one I would like to address would be the Creative Media — it’s a long name, but that one. Two of my platforms have to do a lot with publicity and marketing. And working with that team hand in hand, we would find a much more efficient and effective way to communicate the things I want to communicate on campus that would really reach the students in a way that it’s just not doing right now. I’d also like to work with Picnic Day and the Whole Earth festival. I guess I’m kind of lumping these two together, but these are two of the greatest events that UC Davis throws. And picnic day I — if I’m not mistaken, it’s like the largest campus-wide event on the west coast. Potentially the US? I don’t know if I’m overstepping my bounds there? Those are two events that raise a lot of money and do a lot for our campus to put it on the map. And to keep those things there and to kind of escalate it to what I know it could be, I think would be really cool to see happen in the next four years. And obviously I don’t want to intrude, but I would like to work with the Cal Aggie as well, because their influence and just presence on campus, it’s undeniable. It’s something that people genuinely pay attention to, something I’ve never really seen from my past experiences. And I know that you guys are trying to become an independent group on campus?

LF: Okay, yeah. So I want to work with you guys to make sure you guys are still here. To be there as a support system for what you guys need, because you guys are the number one non-biased source of information on campus. And I think that’s very wonderful.

TCA: What do you think the number one issue facing our campus is?

LF: The underutilization of campus resources. Being in the Greek life community, there’s a lot of things that go unsaid, such as sexual assault, as hard as it is to hear. Over-intoxication, the use of substances that will alter your brain capacity, stuff like that, to where it kind of rewires your brain. I’ve seen a lot of good people go down dark paths because they didn’t have an outlet to properly express themselves, didn’t have a person to talk to, didn’t have that tutor, that free tutor that we offer on campus to help them grind for their midterm.

TCA: In terms of the upcoming fee referendum, what is your stance?

LF: This is long overdue. We’re paying the same student fee of $8 as the people who attended this school in 1979 did. The cost of living has gone up here drastically, cost of attendance has gone up drastically, but the student fee [hasn’t]. ASUCD employs like over 1,000-ish people on campus. You see our campus expanding every single day with different construction sites and different organizations, places opening, you’re going to need a source of income from somewhere. And the fact that we’re still paying the same price as the people did in 1979 is unbelievable.

TCA: Many people feel that ASUCD has little-to-no impact on the day-to-day lives or experience here at UC Davis. How do you plan to rectify this and plan to make ASUCD more impactful for students?

LF: I think a big part of why people don’t acknowledge that ASUCD really has an impact on campus is because they don’t know what we do. I was a culprit of it myself freshman year. Obviously, I know the inner workings of the school, but I didn’t know the logistics, the details. But they’re dealing with a $15 million budget. That’s not something that can be dealt with by the random Joe and Schmo hammering away at tambourines. Whether it’s letting a senator take over the IG for the day, or something like that, to really detail what they actually do.