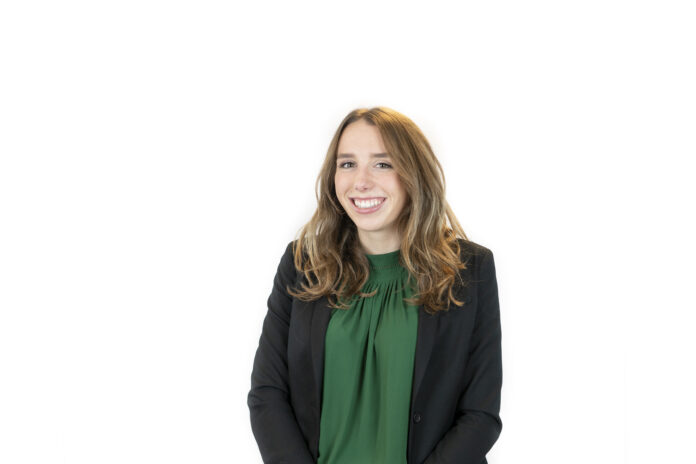 The California Aggie: Can you introduce yourself — your name, your year, your major and your pronouns?

Madeline Thompson: I’m Madeline Thompson. I am a second-year political science major, economics and Spanish minor. I use she/her/hers pronouns. And I’m on the Thrive slate.

TCA: Why did you choose to run on the Thrive slate?

MT:  I was reached out to by Alisha [Hacker], who presented me with this really amazing opportunity. I had always been looking for ways to get involved with ASUCD, whether it was through committee — I was looking at kind of the different committees that were offered — [but] I always had this idea of getting involved in student government. In high school, I was involved in student government from freshman year all the way until graduation being ASB president. So I knew coming to Davis, I wanted to be involved in that capacity. So when Alisha presented that to me, I was more than happy to kind of run with it and go for it.

TCA: What are your platforms and how do you plan to accomplish them?

MT:  My first one is a mental health initiative. The mental health services you have on [campus], in my opinion, are not adequate for the students we have. I’ve done some research and personally, I’ve tried to get counseling appointments and it takes over a month to three months to even meet with the counselor. For students that are going through [something], whether it be stress or things they’re dealing with like anxiety or depression [and] you just really need to talk to someone, that’s not adequate. Especially as talking about mental health is something that’s becoming more and more kind of accepted. People are talking about it, which is amazing, but with talking about it, we need to then adjust the resources for it. I know some people on the Mental Health Initiative committee, and they have been agreeing, if I was elected, to work with me and really refine and get that stuff working and get more services, more awareness for the services we have within our Student Health and Wellness Center for some counseling center and just increasing the volume of counselors and really, overall kind of changing the way Davis now addresses mental health.

My second platform is The Pantry. I love The Pantry. I go to it at least once a week. It’s a great resource for students that are experiencing food insecurity, because being a college student is expensive. Books are expensive. Tuition is expensive. Living is expensive. So food, in my opinion, should be something where any student, faculty or community members shouldn’t have to compromise. So if elected, I would really want to work with The Pantry. I have the contacts for people that work there. I want to reach out and find new ways that we can increase supplies through donations, or increase the funding, or maybe increase the space, because it is a small room and a large amount of our students and faculty do go there. So increasing the supplies and resources that go toward that because it is such a great resource we have here on campus for our faculty and students.

And then my third platform: I am a member of the Greek community, I am in a Greek organization and I really want to improve the relations between Greek life — social, cultural and business — with our university. I can’t speak for the culture and business ones because I’m just not as educated as I’d like to be on them. But I know for the social ones, in addition to providing just friends and [a] network, there’s a lot of great donations that come out of it. In my chapter alone, we donate over $10,000 to Domestic Violence Awareness and to our local Yolo shelters. And then there’s another one that donates money to the Ronald McDonald House [Charities], which houses parents with kids going through cancer. I feel like there’s a disconnect between the stigma Davis has around Greek life versus what Greek life could actually represent if we had better relationships.

TCA: Do you feel that you, as a potential student senator, will be able to improve the accessibility and availability of mental health resources on campus?

MT: Yes. I’m not sure exactly the specifics, but increasing the staffing and the way in which we have counselors [be accessed by] our students and connect with them. Whether it’s through having more accessible drop-in hours to talk or having more staff in general or having tabling opportunities with other clubs, kind of connecting Davis’s perception of it. Like what kind of clubs we have on campus — we have so many clubs that are just aware of mental health and wanting to increase the resources. I think we all [can] join together to kind of tackle that together. And then being the person that is like, “You care about this, you care about this, you care about this, we all care about it together and let’s work on it together.”

TCA: Regarding your third platform, why do you think you need to be a member of ASUCD Senate to improve relations between Greek life and the university, rather than working more closely with say, Panhellenic and OSFL [the Office of Sorority and Fraternity Life]?

MT: I don’t think that it’s necessarily required to be a senator to be a part of that [progress]. But I’ve held a lot of leadership positions within my sorority, and I just don’t feel that was happening. So I feel like the senate position would be a good way to kind of jumpstart that and really make it happen. I don’t want to just solely focus on Greek life, I think Panhellenic is amazing and they’re doing an absolutely amazing job, and OSFL as well, but I just want to kind of have another outlet or another person just kind of pushing that message and breaking that stigma down.

TCA: Are you in favor of the ASUCD Basic Needs and Services Referendum?

TCA: And what have you done to support the referendum?

MT: We’ve definitely gathered as the CoHo people, as a CoHo group, and we have just been spreading the word. We talked about it amongst ourselves and everyone that asks about it, we will absolutely share it. And I personally talk to friends. This is a really, really, really important thing. I brought [it] up in my Greek chapter meetings because I just feel like it’s something that we really need to spread the word about and increase voting. Jus word of mouth spreading it, letting people know that it’s a thing.

TCA: Have you been able to attend a Senate meeting?

MT: I have not, yet. I plan to go next Thursday.

TCA: If elected, what units do you plan on adopting?

MT: I think The Pantry is one of my main ones I really would like to adopt. And since I do have such a personal connection with the CoHo, I would love to oversee that and make sure that there is a student voice on the Senate for that, because I think that’s [an] under appreciated resource, but they might not understand the weight of the referendum. Being a voice for them.

TCA: What have you done to campaign so far and how do you target your outreach for various platforms?

MT: As I mentioned, mental health is one of my main [platforms]. I’ve reached out [the] Mental Health Initiative, [which is] kind of a committee. I’ve gone to the counseling department and observed from an outsider perspective what the ins and outs are and how it works. I reached out to several other random students — I’ll run in [to them] and ask, ‘What is your opinion on mental health at Davis? What do you think?’ So gathering the sense or the feel for it.

I have the contacts at The Pantry, so I do want to figure that out and see where the resources can be [re-allocated]. In terms of campaigning, I’ve gone to chapter meetings and announced myself, my platforms and what I want to represent, and I will continue to do that [as well as] social media campaigning.

TCA: What do you think is the biggest area that ASUCD falls short on and what would you do to correct that?

MT:  I would like to see [improvements] in The Pantry, just because I have personally seen the lines that go out the door all the way to the Death Star for the small room that is supposed to provide food for a massive amount students, and sometimes, if you’re at the back of the line and you get in, there’s nothing left other than some kind of things [that] aren’t substantial food. I think increasing not only the capacity of resources they have, but maybe even just the logistical space of it would be better because it’s a small room, it only fits so many at a time. And when the last person gets in, there is not that much left. I’m not sure how that would work. I have to kind of dive deeper into that, but just increasing resources space and just expanding will be putting more effort into The Pantry.