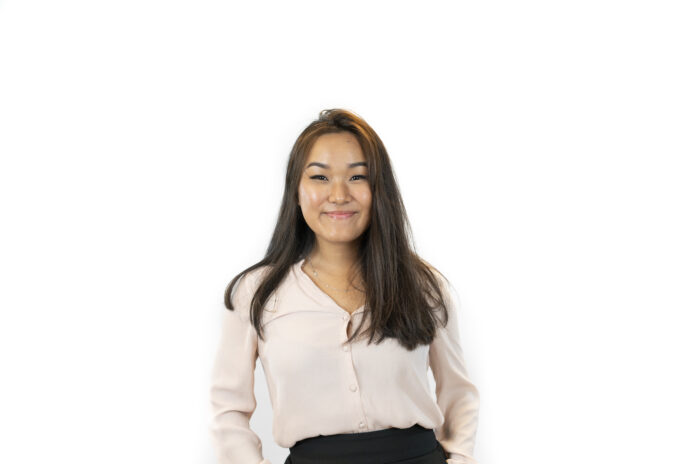 The California Aggie: Introduce yourself — tell us your name, your year your major and your pronouns.

Tenzin Youedon: Hello, my name is Tenzin Youedon. I’m a second year, my pronouns are she/her and I’m a political science and philosophy major.

TCA: What slate are you running on and why?

TY: I’m running on BASED because I feel like my values align with theirs and I came into ASUCD meeting people that ran with BASED and I feel like I really agree with the words of these people.

TCA: Have you served in ASUCD before or do you currently serve on ASUCD?

TY: Yes, I do. I am currently the Legislative Director for Senator Shondreya Landrum.

TCA: What are your platforms?

TY: I’m running on ethnic representation, transportation as well as funding for ASUCD.

TCA: Can you go into a little more detail about thos?

TY: Yeah, so for ethnic representation, I feel like there are so many different communities here at Davis, but not all of them are really being represented or heard through ASUCD. So, what I would do is email them, go into meetings, do whatever I can to communicate with them and make sure their needs are being met. Also, I know [a senator] is currently working on creating some sort of email system newsletter, and I would collaborate on that.

Going into transportation, so Unitrans is just a really great, affordable method to get to school. However, I believe there are a few issues that will need to be resolved, [including] overcrowding. Through personal experience, and through my friends’ experiences, it can be kind of crazy on Unitrans sometimes, in certain parts of the day. Sometimes everyone has to stand up, and they [are] asked to hold their backpacks. I feel like, one, that is a safety issue, because there has to be a limit for people that can get on the bus. And two, it’s just uncomfortable. I think it’s an invasion of your private space. And it’s unfair to have to go through that every single day trying to get to school. So how I would try to relieve that issue is by creating this carpooling system. I know that TAPS already has one, however, that one is purely online and you have to schedule it ahead of time. My idea would be creating designated spots right next to the Unitrans bus stops where cars who are registered to the school can go by if they have empty seats in the car and can pick up students and drive them to school in the morning. The plan isn’t completely thought out. It is an idea, and I already have contacted TAPS with the idea and I plan on collaborating with them, maybe creating a new system or adding on to the system we already have.

And for funding, we all know that there is a $500,000 deficit and that means the potential loss of student jobs and that means the potential loss of a bunch of resources that ASUCD provides on campus. So I think another goal that I strive for is removing that deficit as much as I can because it’s really important to keep ASUCD running. I’m currently working on fundraising for the gala with Senator [Shondreya Landrum].

TCA: So for the ASUCD Basic Needs and Services Referendum, it sounds like you’re in support of it. What have you done specifically to ensure its passage?

TY: So far, I have just been advertising it as much as I can to the people that I know and on social media.

TCA: What do you think the biggest issue on the campus is right now, and how would you, as a senator, be able to address this issue?

TY: I think a big issue on campus is, again, transportation and parking and just getting to school. It may be an inconvenience and it may be considered a minor inconvenience, but I feel like it is a really big issue that a lot of people face every morning trying to get to school, trying to get parking, and it’s really expensive to pay for [a] parking permit. The buses are overcrowded and I feel like it’s a big mess

TCA: So serving as Shondreya’s legislative director, what specifically have you accomplished so far?

TY: Well, we’ve been really focusing on the gala so far. That’s been, I think one of her biggest projects. Another thing we’ve accomplished [is] communicating with different communities [and] going to events. Shondreya has a large staff, so we’re been really able to do outreach, and I think that’s really important.

TCA: What do you think is one of the biggest issues within the Senate right now? And what would you hope to contribute or do differently on the table?

TY: A big issue, for sure is partisanship. I think there is a lot of politics that goes on that definitely divides the Senate. And how I plan to run, or how I plan to go into Senate isn’t by making decisions based on my party, it’s based on listening to what the community needs, and putting the community’s needs first before, you know, decisions based on what the other party wants or whatever. I think that’s definitely a big issue.

TCA: So a lot of students feel that ASUCD has little to no impact on their day-to-day lives. Do you think that’s an error in perception, or do you think there’s anything that can be done to kind of rectify that?

TY: That definitely has to do with ASUCD’s lack of being able to reach out to the community. Because I feel like UC Davis isn’t UC Davis without all the resources that ASUCD provides. And I feel like if the students really knew that, really understood that and we were able to get that in their heads, then that wouldn’t be their conception of ASUCD. Because it’s Unitrans, the CoHo, the Bike Barn, it’s everything. We definitely have to talk to our community, reach out and advertise it.