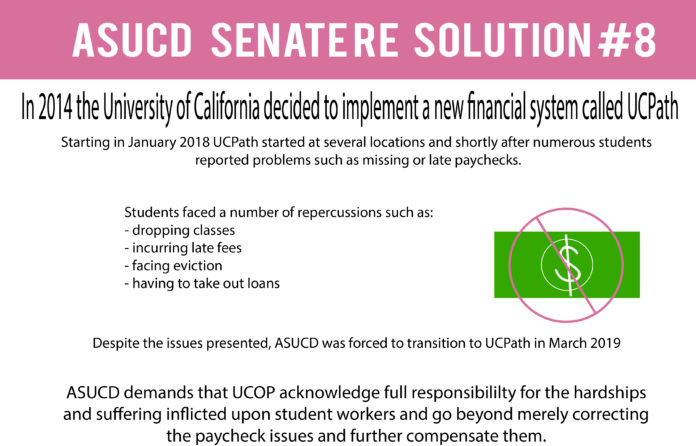 Senate Resolution #8, which condemned the university’s flawed rollout of the UCPath payroll system, was adopted by the ASUCD Senate on Jan. 21. The implementation of UCPath was widely seen as a failure by undergraduate students and led to a walkout of student employees at the CoHo who faced difficulties receiving timely and correct pay.

Since its implementation in October of 2019, as many as 800 undergraduate students, faculty and staff have been affected. By the end of Fall Quarter 2019, at least 50 students were still without paychecks.

“All known issues since UCPath implementation have been resolved,” Lovely said via email.

Despite Lovely’s reassurances, at least 41 students still remain unpaid at the time of publication. Lovely claimed that paychecks have been written for these students, but have yet to be picked up.

Many of these checks are only available at UC Davis Central Payroll Office, located far from campus on Research Park Drive. For those who work, attend school during the regular work week or lack reliable transportation, the decision to rely on check pickup at an off-campus location has introduced an additional barrier to receiving their money owed. However, students can contact the Central Payroll Office to see if their paycheck can be forwarded to Dutton Hall by calling (530) 757-8550.

“I wrote the resolution with the intention of documenting the harm done by UCPath across the UC campuses and condemning the lack of concern for student welfare indicated by its sloppy and rushed implementation,” Choi said. “I think UC Davis should have pushed back on the initial implementation of UCPath, as it had already been clearly demonstrated at other campuses, like UCLA, that the implementation caused many issues that harmed students. Knowing this, they allowed the system to wreak havoc on our student workers here.”

Among the issues cited in the resolution, senators criticized the centralization of the onboarding of new employees and payroll processes, now overseen by UC Davis Shared Services Office. The resolution states this “significantly delayed the onboarding of Unitrans employees and Coffee House employees, which, in addition to providing crucial services for students, have the highest volume of student workers.”

These onboarding delays are still impacting students in Winter Quarter 2020, limiting the number of buses available during Unitrans’ highest ridership season and the frequency of bus stops.

The resolution states that the University of California Office of the President “must go beyond merely correcting the paycheck issues experienced by UC Davis student employees and further compensate them in a similar model as has been arranged with UAW Local 2865.”

Authors of the resolution also hope this resolution will serve as a warning to other UC campuses who will implement UCPath. Vice President Shreya Deshpande commented further on this intention.

“The resolution also serves as a preliminary warning — a heads up — to the remaining UC’s that are yet to see the implementation of UCPath,” Deshpande said.

“As Vice President, I am responsible for sending out resolutions that are passed by Senate, and this allowed me to notify these campuses and connect with their leadership, advising them to ask their administration to potentially delay the rollout until all of the technical glitches and errors can be fixed,” Deshpande said.