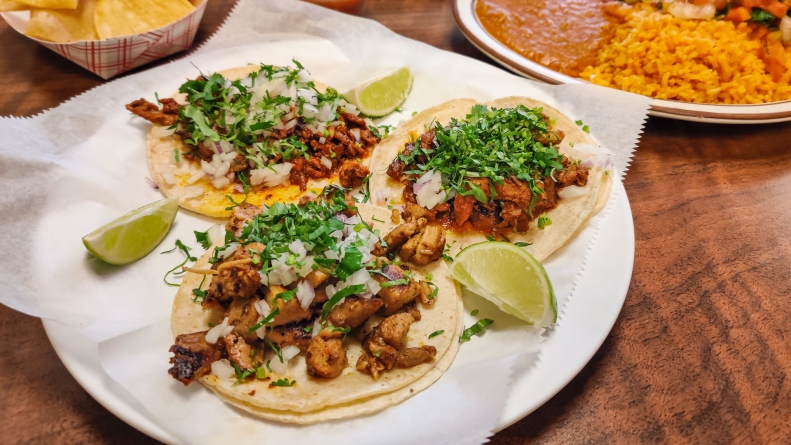 A three-part criteria for success

Since coming to Davis, I have been on a personal mission to find the best taqueria. The place you frequent every weekend, filled with welcoming mariachi music and brightly colored walls. But more important than the decor, taquerias are home to tacos. These bundles are the most elegant type of food: meat within a warm tortilla, covered with a variety of fresh green to spice up your mouth. They are made to be effortless, an easy solution for a late night dinner. From this mission, I have devised a three-part test to determine the best street style tacos in Davis, creating a comprehensive review to inform your next Mexican-style outing, while also taking into consideration affordability.

First, the tacos have to be hot. When you get them, they need to be fresh off the grill, a representation of the ease and simplicity that tacos embody. A cold taco may often demonstrate a lack of care, both by the establishment and the server.

Second: the meat. For the purposes of this study, we will be focusing on the classic chicken taco. If the chicken is flavorful and well-seasoned, this provides a look into the quality of the meat in the rest of the dishes. If the chicken is out of this world, the steak and pork are sure to portray similar elements. The treatment of meat divides the “okay” tacos from the “amazing” ones. To truly be above the rest of the crowd, the meat has to shine in its complexity.

Last is the toppings. Onion and cilantro provide the perfect backdrop to support the intensity of the meat. Iceberg lettuce and chunks of tomato, however, are not as kind, diluting the chicken in order to create the appearance of a loaded taco.

Tres Hermanas was not the classic taqueria I thought it would be. There were no $2 tacos on the menu, yet Randall Dobkin, a second-year studying political science and economics, explained his take.

“Tres Hermanas is just a different restaurant,” Dobkin said. “It’s more of a sit down place, and a place to get drinks. You don’t come here at three in the morning to get tacos. The chicken is not the most seasoned, yet it comes out very hot, and the toppings are lettuce and tomato, elements not in the classic street taco.”

The lack of onion and cilantro, as well as the sit down nature of the restaurant, place Tres Hermanas at the bottom of the four options, more of a Saturday lunch with parents than a quick taqueria.

El Burrito is located conveniently downtown, and embodied the classic taqueria atmosphere. The taco was hot, covered with onion, cilantro and well-seasoned chicken. The only critique I had was the salsa — it was incredibly hot, but easily avoidable with a quick request. Henry Gardener, a second-year political science major, outlined his position.

“El Burrito is just the most bang for your buck,” Gardener said. “On Taco Tuesdays, when tacos are $1.50, it is just the best deal. There are no crazy long lines, and the pastor tacos are amazing too,” he says.

Davis’s Piñata was the next stop, and the taco was very hot, covered with onion and cilantro, at $2.00: a classic street taco.

Dobkin, however, noticed a slight difference between the tacos of El Burrito and of Piñata.

“Although both solid tacos, El Burrito just has more flavor in its chicken itself,” Dobkin said. “The chicken just has that extra little spice.”

Last up was Taqueria Guadalajara. The tacos here were considered to be better than the three other Mexican restaurants — the onion and cilantro toppings were paired perfectly with flavorful, hot chicken that beat out El Burrito in terms of texture. What really set it apart, however, were the fluffy sand dollar tortillas, which were equally as hot as the chicken inside.

“It just beats out El Burrito,” Dobkin said. “Although El Burrito is my eating out staple, I find Guad’s to be better in terms of meat and tortilla, separated even more from the competition in its true street taco style.”

In second-year cognitive science major Noel Fernandez’s words: “When it comes down to it, Guad’s is home.”