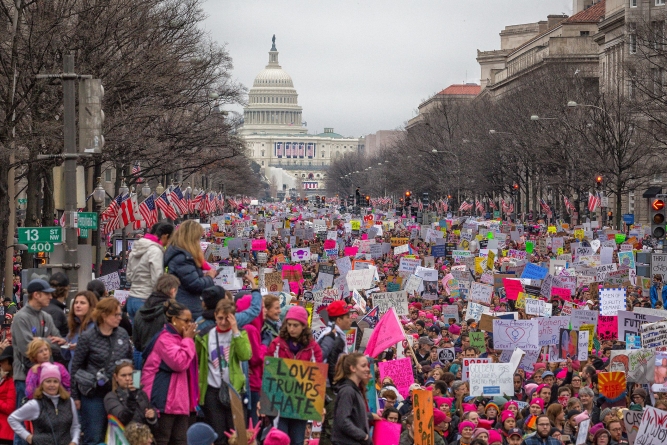 Photo Credits: Mobilus In Mobili / Wikipedia Commons. Demonstrators at the 2017 Women's March on Washington in Washington, D.C. (Licensed under [

Sexual assault though a woman’s perspective

Sexual assault is a reccuring issue, but there never seems to be a resolution. Although attempts are made to educate the public on the issue, accusations of rapes or sexual assaults constantly make headlines, and women disportionately suffer the consequences.

UC Davis students who identify as women courageously took a stance against this pattern by anonymously sharing their stories of sexual assault.

The first woman to share her story was a 20-year-old neurobiology, physiology and behavior major.

“I was 18 when it happened,” she said. “I met this guy my first day of my freshman year, when I moved into the dorms, and I went to a frat party. He asked me if he could go home with me to the dorms and I said no. I was not into that.”

“He was a sophomore, an older boy, and I thought he was so cool,” she said. “And so we started hanging out Fall Quarter, and eventually we did engage in sexual intercourse. He asked me if I was comfortable using no condom, and I said no. I had never, not even with my past boyfriend, ever had unprotected sex. That’s a deal breaker for me.”

“I got a pet fish, and I invited him over to see it. I was drunk because I was celebrating my fish’s birthday. And he decided to drink […] I was like, okay, I guess you can sleep here. And so then, that night, we had sex,” she said. “I wasn’t that drunk, I was perfectly [capable] to consent. And he again, asked about the condom and I said, ‘No,’ like, that’s not something I’m gonna budge on. And so we went to bed afterwards, and then the next morning I woke up to him f-cking me without a condom.”

“I woke up and I pushed him off of me. [He said he] thought [I] was awake, but if I were awake, why were my eyes closed? I didn’t tell anyone for two weeks that had even happened because I didn’t know what to do,” she said.

She eventually told her roommate and her resident advisor what happened because she was still in communication with him and was in denial about what had happened. As a mandated reporter, her RA stopped her and told her that she was sexually assaulted.

“No, I wasn’t, because we had sex before, so it’s totally fine,” she responded, but as she explained what had happened, she realized, ‘Oh my god, he sexually assaulted me.’”

“I asked her to keep his name off of [the report],” she said. “And until that happened, I never understood why girls don’t automatically report — like why they don’t report the name and get the guy in trouble? But now I get it, and it’s so hard to explain, but it’s just, you don’t want to live in it.”

“I wouldn’t have reported it all if I didn’t tell her because it’s really hard to recount what happened and to actually say the words, ‘I was sexually assaulted, and this is the person who sexually assaulted me,’” she said. “But I get now, like in the Kavanaugh case, why [Dr. Christine Blasey Ford] came out so much later; it makes sense, because it’s so hard to do it right after it happens. You’re in so much denial and traumatized.”

She ended up with perfect grades that Winter Quarter, not out of sheer determination, but because of her insomnia. She would do her homework at all hours of the night, because she “was so afraid of sleeping, because of him.” She experienced panic attacks and anxiety and went to therapy, which she said didn’t help.

“I think the thing that ended up fixing it for me was just talking about it,” she said.

Three weeks after the sexual assault occured, she was at a party and ended up finding out that the man who had assaulted her had chlamydia. She ended up finding out about his STI through a friend, and confronted him about it on the Quad, where they argued about the effects of chlamydia. She made him take his phone out and text all the women whom he had had sex with to inform them about his STI.

“[I said], ‘Have a great life,’ and I just walked off,” she recounted. “The worst part of all is that it wasn’t even my fault, the fact that I had unprotected sex. It was not my fault.”

She got her STI test at the Student Health and Wellness Center, but was met with accusatory questions about her sexual history.

“I got a call that I got chlamydia because his d-ck was inside me for five seconds unprotected,” she said.

She underwent a round of antibiotics and probiotics, which ended up costing $150 out of pocket.

“At the end of the day, I don’t regret anything, because I think I learned so much from it,” she said. “I think before [my experience], I was so naive and couldn’t quite comprehend why on earth a girl would not report. And now it makes complete sense to me, because we live in a society that blames the victim and questions the victim.”

“My housemate last year was like, ‘We need to question the girls more; who’s to say they’re not lying?’ And now, any person that says they’re sexually assaulted, I automatically trust them and believe them because it’s not something you lie about,” she said.

The second woman to share her story was a 20-year-old undeclared major.

“I had a co-worker that was very inappropriate with me,” she said. “At first, I thought it was just in a homie way, and then he would start making me feel really uncomfortable by grabbing me in places where he knew there weren’t cameras.”

“When somebody would walk by us, he’d immediately stop, and I would always tell him, ‘I’m trying to work, […] don’t touch me like that, we’re just friends,’” she said. “That went on for a while.”

One day he lured her to the back freezer and he gave her a beer.
“Then he just grabbed me and went in for the kiss,” she said. “I gave him no signs at all whatsoever and like, I’ve never validated his moves on me. And he’s an older guy, probably in his 30s. He’s not like this young dude. And I obviously wasn’t attracted to him or anything. He just [planted] his lips on mine.”

“I obviously pushed him away,” she continued. “I ran out of the freezer, and it was just so uncomfortable and so not okay. I don’t think I realized that until a long time after it happened. At the moment I was like, ‘I didn’t feel comfortable, and I don’t feel comfortable when he does things to me,’ and I tell him to not do them to me, but it doesn’t do anything.”

“I didn’t even think about telling anybody about it,” she said. “I worked with my best friend and he had done similar things to her, but he never put his lips on her. He would touch her in inappropriate ways, like grab her waist […] while we were trying to work. It was really inappropriate.”

“[If] he’s doing it to both of us, like it’s okay, you know?” she said. “I think when I realized that it was really messed up was when I actually told somebody about it. It hits harder when you say it out loud, I think.”

“I’m never going to tell my parents or anything,” she said. “Nobody wants to hear that their child has been sexually assaulted. It’s also weird because I feel embarrassed. In a way, I was violated and I let them violate me. There’s a sense of embarrassment that I think goes a long with the act.”

“I’m sure a lot of people feel how I feel,” she said. “There’s obviously so many predatory guys out there. You really come to realize that as you get older. People don’t understand that some things are not okay. I feel like I don’t know how things could possibly change. It’s just […] so ingrained in society.”

The final woman to share her story was a 20-year-old international relations major.

“I feel like it’s just something that follows me, something I can’t seem to shake no matter where I am,” she said. “I find it absurd that four out of four of my housemates have all been sexually assaulted in some way. It almost seems like a norm for women nowadays, and it definitely shouldn’t.”

“My senior year of high school is when it all began,” she said. “The guy I was talking to for a while ended up getting accused of rape. After that, it just kind of spiraled. More and more girls started coming forward saying that he had sexually assaulted them in some way and that he was a predator.”

“The crazy thing is that he was ASB president, he was on the varsity baseball team, everyone seemed to love him and his parents were gems,” she explained. “Senior year sucked for me because I was so torn that the person I spent so much time with was being accused of something so unforgivable. Although he never did anything to hurt me, I felt almost contaminated. I never got closure with him, he went off the grid, and he never reached out again. So once I went to college, I thought I would just be able to move on.”

“I started talking to this guy freshman year of college,” she said. “He was really sweet, handsome and smart. There were no red flags. One night, we went to a party and I drank so much I completely blacked out. I had already spent the night in his dorm before, so he ended up taking me back to his place for me to sleep it off. I don’t remember how I got there, or even leaving the party, but all I remember is a snippet of the night of him on top of me.”

“I woke up blurry from the night before, and I didn’t even realize what happened until later on that day,” she said. “I ended up confronting him, but I didn’t really think much of it. He said that I told him I sobered up and that I consented, so I kind of pushed it aside. A few weeks later, I started getting panic attacks every time I saw him, and I knew something wasn’t right.”

“The panic attacks got so bad that I ended up calling the UC Davis Center for Advocacy, Resources and Education (CARE) and talking to this lady about it all,” she said. “I didn’t realize how messed up I was after high school and how it came with me to college. I realized then that I wasn’t in the right mindset to consent at all and that it wasn’t my fault. I realized that I was sexually assaulted, but I didn’t want to press any charges whatsoever.”

“I just want to be a normal college student who goes out and has fun, but sometimes I find myself leaving parties early because I get panic attacks,” she explained. “Sometimes, I end up drinking a lot because I don’t feel drunk. I think my body goes into autopilot and won’t let itself get drunk, and that is honestly really frustrating because I just want to be normal and have fun. I don’t get that choice anymore; it changed who I am.”

There is no “right way” to confront this issue, but sharing personal stories may encourage others to come forward — sparking a change.

The names of students who spoke about their experiences with sexual assault have been omitted in order to protect their identities.