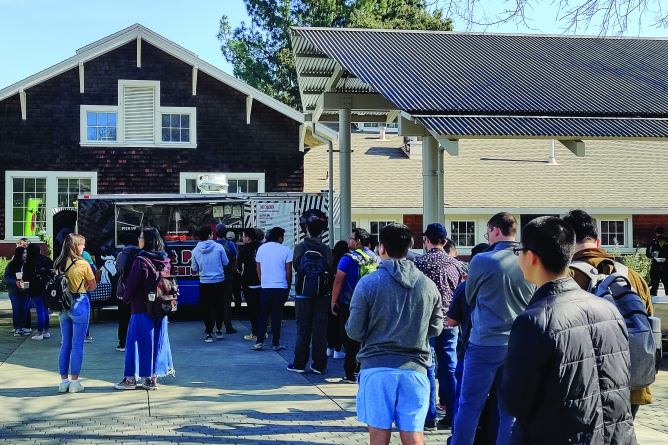 Photo Credits: People wait in long lines to be served by the Nash & Proper food truck at the Silo on the UC Davis campus. (Photo by Justin Han / Aggie)

There’s a new food truck in town serving UC Davis “Nashville style hot chicken with a California twist.” Nash and Proper, which has garnered attention at the Silo for its lengthy lines, is co-owned by chefs Cecil Rhodes and Jake Bombard.

Rhodes is also the owner of Cecil’s Taste, which previously operated a food truck that served food at the Silo. The menu for Cecil’s Taste included smoked pork belly and burgers, but Rhodes noticed that there were a number of UC Davis students who don’t eat beef or pork.The vegetarian burger sold well, and lots of people asked him about a chicken option. That was when Rhodes started playing around with a recipe for a chicken sandwich.

“I started [selling it] when we were at UC Davis and we started selling out,” Rhodes said. “We were going through about 200 pounds of chicken a week between UC Davis and UC Merced. That’s kind of when the light bulb went off — this could be a concept.”

“I started studying Nashville hot chicken,” Rhodes said. “I started messing around with a recipe and came up with our hot oil that we dip our chicken in and our different levels of spices.”

Rhodes wanted a fire-hot chicken food truck that imbued the feel of a picnic, and thus, Nash and Proper was born. The truck offers chicken tenders, wings and the famous Sammich, which has amassed a huge social media presence. Customers can choose from one of five levels of heat — naked, mild, medium, hot and cluckin’ hot.

The Sammich, which consists of crispy fried boneless thigh, slaw, fuego sauce and pickles served in a bun, is the most popular item, but at UC Davis, it faces close competition with the Quarter Bird, which includes a boneless leg and thigh served with bread and pickles — a menu item that never makes it in the top two at the truck’s other locations.

“Students may need a little bit of money to go a long way,” Rhodes said. “With the Quarter Bird, it’s a really big piece of chicken. You could probably feed yourself three times with that same [order]. It’s delicious food, I think it’s affordable.”

Natalie Sahabandu, a first-year graduate student in the biochemistry, molecular, cellular and developmental biology group, went to Nash and Proper with a friend who works in Davis and had heard the hype about the food truck from co-workers. Sahabandu ordered the Quarter Bird “cluckin’ hot,” which she said was just a little too spicy for her — she plans to order it “hot” next time.

“I think the food is really good, but in general it’s really worth the money,” Sahabandu said. “For 10 bucks, [you get] gigantic pieces of chicken which can go for two meals — for a student, I think that is very accommodating and very attractive.”

She compared Nash and Proper’s popularity to that of Shah’s Halal, which she believes also has a good food-to-money ratio.

Second-year chemistry graduate student Winston Chow decided to return to Nash and Proper after trying it a few times and enjoying it.

“I think it tastes a lot better than a lot of the food trucks here, but that’s just personal preference,” Chow said. “I think what draws people in is that you see a really long line that you’re almost like, ‘Oh, that must be really good, so I might as well get in line and try it out.’”

Passersby seemed to have mixed opinions on this — some students walked by and took videos of the long lines while others appeared to be considering whether or not to join the line. One student said, “People in California are either too patient or just crazy, why would you wait in such a long line?”

Second-year statistics and biochemistry double major Christine Zhou was drawn in by the long lines she saw. Zhou had never tried food from the truck, but planned to order the chicken thigh “naked,” since she’s not a “spicy person”

“I’m just curious,” Zhou said. “You want to find out why there’s always a long line for this chicken.”

Rhodes said the popularity of the truck can be attributed to the fact that the food is delicious, which is something that people gravitate toward, as well as the truck’s social media presence. They see about 300 people a day at UC Davis — and not all of them are associated with the university. Some, like Sahabandu’s friend, work in Davis, but Rhodes said there are some people who tell him they came to Davis from West Sacramento to try the food.

“We really appreciate coming out [to UC Davis] and the love from all the students and the staff,” Rhodes said. “We’re really grateful for what we have, we don’t take anything for granted. We always want to put smiles on people’s faces. We always want to deliver a delicious product. And you know, when it’s reciprocated, with people standing in line for 45 minutes, it’s really humbling.”