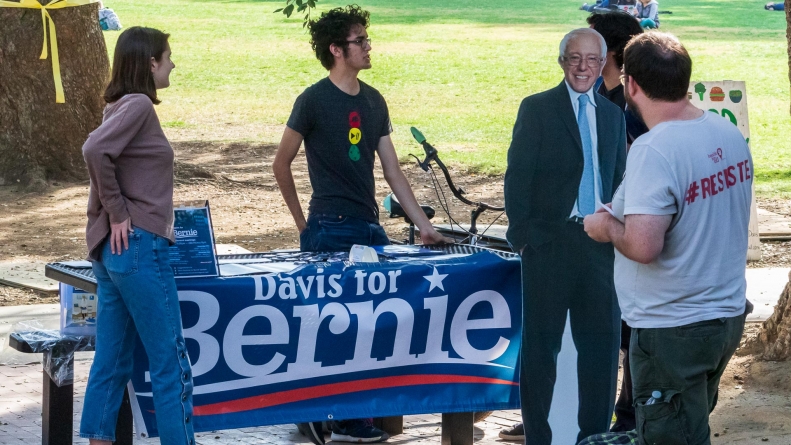 Photo Credits: Quinn Spooner / Aggie. Davis for Bernie is one of many political groups can be found tabling in the Quad at UC Davis.

On-campus voting for state primaries will take place March 3 in the Garrison Room, from 7 a.m. to 8 p.m.

With the escalating race for the Democratic nomination and the upcoming Democratic primaries in California, students who registered Democratic face the task of sorting through campaign advertisements and biased and unbiased news sources to make an informed decision when voting.

This is no easy task, according to Brooke Pritchard, a third-year political science major and president of Davis College Democrats (DCD).

“I just think the most important thing in voting is making sure [of] the information you get,” Pritchard said. “Every news [source], no matter how factual you think it is, everything has a bias. I just want people to crosscut those ideologies, […] things that have historically been a binary and try to deconstruct that.”

Even if students do not vote in the primaries, the fluctuating popularity of the Democratic candidates and the states of the two major political parties is of interest to many Davis students. This includes Noah Dickman, a fourth-year economics and political science double major and president of Davis College Republicans (DCR).

“I have never seen a political party try so hard to lose an election,” Dickman said, referring to the Democrats.

A large portion of politically-inclined individuals feel that the two major political parties are becoming more polarized, each moving further away from a moderate agenda. DCD and its members reflect the changing views of the Democratic party, according to Pritchard.

“This has been an organization that’s lasted over a decade,” Pritchard said. “Definitely at the start, they were more moderate, and now we’re transitioning to leaning further left. I feel like Bernie Sanders has really changed the scope of that and exciting more of the electorate. Not only have we [become] less moderate and more progressive, but also more diversified.”

In regards to the primaries, Pritchard said her ideal candidate would solve past problems for the party, such as changing DNC requirements.

“I’m definitely happy that there [have] been long-term ailments of the Democratic party that [are] finally being seen and brought to light,” Pritchard said. “I’m hoping that whoever gets elected is going to be able to cure that.”

To Dickman, not just the Democratic party but American politics in general seem to be changing as a whole.

“I think that we’re kind of in a stage [of] celebrity politics,” Dickman said. “I think we’re going to see a lot more people running as personalities [and] policies are not going to matter so much in the future.”

With all due respect…

On a liberal-leaning college campus, Dickman said it can be difficult to feel comfortable discussing his political views.

“[A] college campus is supposed to be about learning how to confront different ideas, especially how to process things you disagree with,” Dickman said. “To me, the worst thing you can do is try to make the thing you disagree with disappear. Throughout history, […] all of the worst ideas have come from […] someone trying to suppress a message.”

According to Dickman, DCR tries to encourage differing opinions among Republican students at Davis.

“It’d be super boring if we just had a room full of people agreeing with each other,” Dickman said. “Maybe once or twice a quarter we have debates within our club about different things Republicans disagree on. On basically every issue you can think of, we have a few people who disagree.”

DCD has a similar respect for dissenting views within the Democratic party, according to Cece Garofoli, a second-year international relations major and director of political affairs for DCD.

“In a Democratic club, you’re definitely going to get more left-leaning [members], but that doesn’t mean everyone’s for Bernie,” Garofoli said. “I’d say we get a variety of viewpoints. We try to ensure that everyone’s viewpoint is accepted and able to be heard.”

During the primaries, given the variety of views present among members in the club, DCD does not hold debates.

“Everyone has their own views, and that’s why we’ve made it a policy not to talk about the primary elections […] because we want to stay unified,” Pritchard said.

Despite different candidate preferences, for Garofoli, there is a clear sense of unity within the party.

“At the end of the day, we’re all Democrats,” Garofoli said. “We all […] share similar values.”

Reading multiple news sources provides a more holistic view of current events and politics, and can help students be fully informed, according to Dickman.

“Most people tend to read the news that they already agree with,” Dickman said. “I read maybe 10 news sources a day. I like to see what the other side has to say. Usually, the truth is, if every different story says the same thing, it’s probably true and then everything else is kind of editorialized.”

Most news sources come with slight to significant biases apparent in their presentation and selection of facts — or lack thereof.

According to Garofoli, the student voting turnout on campus for the 2018 midterms was significantly low — only 4%. For this election, Garofoli hopes to see an increase.

“For the amount of students eligible to register on campus, I just really hope that for this primary, at the very least, we can increase turnout exponentially on campus,” Garofoli said.

Pritchard hopes students will inform themselves about the issues and people they choose to support.

“If people were more informed, they would feel more trusting of the government,” Pritchard said. “It’s all about making that information accessible in language and bringing it to everyone’s attention.”

Registered voters can cast their ballot on campus for the California state primary election on March 3 in the Garrison Room on the second floor of the MU from 7 a.m. to 8 p.m.